How I Reclaimed My Body and Health with Primal Living

My initial interest in Mark’s Primal Blueprint was, I’ll admit, primarily driven by aesthetics. I wanted to improve my physical appearance. During my teens and early 20´s I´d been super fit, but those days were long gone. At 38, I didn’t enjoy looking at a middle aged overweight guy in the mirror. The image was accompanied by thoughts of how I use to be. I wanted to get back my youthful physique. It’s not that I wasn’t concerned about my health. It’s just that other than getting fatter and less fit, I hadn’t suffered any acute illness. Sure I was heading for a higher risk of coronary heart disease, cancer, diabetes and stroke, but I hadn’t had any signs or symptoms yet. I wasn’t a smoker or a frequent, heavy drinker. I´d kept away from fatty foods and ate plenty of whole grains so I must be healthy, right? Wrong! 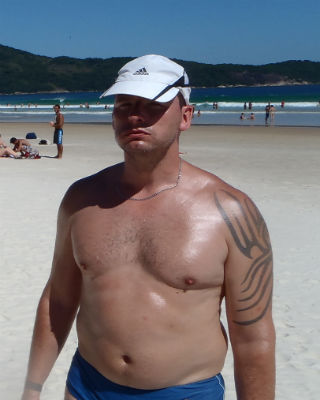 After a short search online, I found Mark’s Daily Apple. I took heed of his teachings and set about trying to change my body composition through primal eating. I followed the instructions and changed my sugar rich diet into a low carb, high fat one. I threw my fears about saturated fats and cholesterol to the wind and embraced the concept best I could. I wanted to avoid getting too technical about what I was eating, so I just focused on eating plants and animals—or, in other words, real food with real flavour. I found that pretty easy. I really like vegetables, meats and fish anyway, so it was instantly a pleasure to begin eating the tastier foods. For my entire adult life I´d been scared of fat and now I was finding that the fat was sometimes the most delicious part of the meal!

It’s what happened next though that really changed my perception on the human diet and how dramatically wrong accepted “wisdom” is on the subject. Sure I lost my excess body weight, no problem at all. I got that physique I´d been missing. But there was something else—something of far greater value…

For the fat loss, it was surprisingly easy. There was no calorie counting, no food weighing, and no periods of hunger. From MDA and The Primal Blueprint, I gained an understanding of what different foods are and what they do to us. The education helped me choose foods with confidence and knowledge. I ate lots of delicious foods. I was never hungry. I barely exercised, yet I lost 1 kg of body weight consistently over a period of 12 weeks. I had to go and buy new clothes because none of mine fit any more—even my feet shrank by a shoe size. All that was great and the lower body weight meant I could finally manage the elusive handstand push-up (albeit against a wall). I was very pleased with the results. But what I hadn’t realised was how, despite no symptoms of illness, I suddenly felt 100 times healthier than before the change of food choices. I was more alert. I had higher levels of energy. I was happier and less stressed. It was a dramatic change and something I had not been expecting.

After a week I suddenly found out how bloated my gut had been. During the first couple of days, my digestive system started to function much better. I suppose it was the change from stodgy carb foods blocking up the gut to highly nutritious, easily absorbed foods passing through more easily. From a biomechanical perspective, the good food “passed though” much more effectively after I kicked out the bad food. I felt light on my feet, smaller around the waist and, well, internally, I felt cleared out. It was quite a liberating sensation and very encouraging. I could innately sense this was a good development.

In week two, I saw improvements in my skin and continued to see digestive system improvement. But I was starting to feel less energetic and at times even a little nauseous. I was having doubts and wondering if what I was doing was actually a good idea. Despite that, I wanted to see it through to the end of the 21 Day Total Body Transformation Challenge, so I kept going regardless.

Week three: Well, what a difference. My body was feeling great. My cognitive processes had improved. I was enjoying much clearer thought, better levels of concentration and better sleep. I know it sounds a little crazy but it was like I was coming out from a cloud and I could now see much more clearly. The changes were so dramatic that it became a little difficult to keep it to myself. I wanted to tell everyone. There was a danger of becoming fanatical about it. It was from the shock of suddenly realising how wrong something was and having a desire to help wake others up to reality. My wife could see the results and decided to join me. We both noticed huge improvements, including fat loss, but that really had become the lesser benefit by that point. It was great to make this change with my partner. The whole experience became a shared one, which of course made shopping for foods and cooking much more fun.

Cheat meals. From time to time we have both decided to treat ourselves to a cheat meal—something non-primal. Sometimes it was a food we felt we missed or, through bad planning, one for which we had no better options available at the time. The funny thing was that our “treat” quickly became less pleasant than we anticipated. Each time the reality of a cheat meal or treat was a disappointment. Worse still, and more worryingly, these cheats were usually followed by some kind of physical reaction. Eating foods that contained wheat, for example, would be followed by the appearance of painful spots or boils by the next morning. Sometimes we´d have heavy sensations in our guts and sometimes constipation. That was very worrying and we realised: if that’s the result of a small exposure, what was the effect of a lifetime of carbs and grains as staple foods doing to us? Food for thought indeed.

Well, it’s been months now and neither I nor my lovely wife has any intention of going back to eating grains or high carb diets. The fad diet is over and now we only intend to eat foods that are suitable for human consumption, guided by Mark and our ancient ancestors.

Of course Mark’s Primal Blueprint is not all about food or exercise—it’s a blueprint for living. I’m continuing to change my lifestyle beyond food and exercise, but I have a way to go. I still work too much and don’t manage enough play with my family, but when I am home we certainly do much more now than ever before—whether it’s time at the beach, playing basketball, playing in the park, at home or even skateboarding. I know my body is back to being youthful again and so it is again functional for play. This is a great way of life and I will continue to develop it with my wife, children and friends. I do and always will encourage anyone to consider this lifestyle change.

I find this “Primal” movement very exciting and I’m deeply interested to see where it takes us all. It’s just such a surprise to me that we´ve gotten this far with so little knowledge about what we eat and the effect foods have on us until now. Thank you, Mark. Thanks for sharing what you have learned.