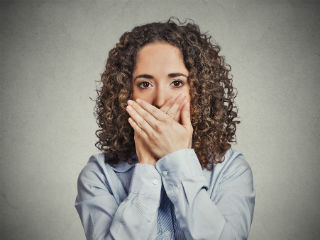 A little bird told me the other day that it might not be a bad time to talk about the impact of emotions on our health—particularly our choice to express or not express them. I’ve heard people around me share that they’re worn out lately—that emotions have imposed a toll regardless of how well they keep their own in check. It got me thinking. Increasingly, researchers uncover the remarkable imbrication of mental and physical well-being. How we nourish or neglect our physical selves affects how we feel psychologically. Likewise, the emotional terrain we traverse throughout a day, in turn, elicits its own physiological feedback. Yet in this culture, there’s a certain esteem for the stiff upper lip. We restrain ourselves for the sake of others—our perception of their comfort and/or of their opinion of us. But are we sacrificing something in doing so? When does the polite instinct to suppress our emotions benefit us, and when does it backfire?

It’s hard not to think of Grok in these instances, and this might offer one of the more entertaining hypothetical scenarios. In close-knit band society, idiosyncratic characters or strong personalities were likely tolerated if they didn’t kick up too much discord or impair the group’s ability to thrive. That said, loose cannons who chronically threw the group dynamic into chaos probably would have been a different story. They would have had the choice to assimilate (and simmer down) or find a better fit elsewhere (not likely). As a result, a certain emotional reserve would’ve paid off.

Yet, in all fairness, society was different then. There certainly were major stressors, but they were more episodic than chronic. The intimate structure and egalitarian ethos of band society offered a means for individuals to be heard and conflicts to be contained—and, when possible, resolved.

Today, our social networks are bigger (but less intimate), our work hours are more lengthy and our daily schedules are more structured. It could be argued we live with more choice but less power—the same propensity for dispute, but more depersonalized means for settlement. Not to discount the many benefits of contemporary existence, but we often live with more stress and less support than our ancestors.

In the face of all this, maybe we should cut ourselves some slack. Feeling frustration in a day isn’t bad in itself, right?

As long as we don’t act on our emotions, we’re still in the good graces of society. Except that those emotions are still acting on us.

Let’s look at the whole picture.

In terms of expression, research suggests our risk for heart attack rises substantially (up to 8.5 times higher in the couple hours following an angry outburst). Experts cite the long-term risk as clearer and more substantiated. The more often subjects erupted in anger, the greater their risk of heart attack (more than a three-fold risk) and stroke (almost a five-fold risk) over time. (1, 2) Not surprisingly, the more risk factors a person has, the analysis shows, the greater the chance anger will send their health over the edge.

Most telling, perhaps, could be study of an interesting subset researchers call “repressors”—people who employ repression as a regular coping mechanism rather than selective strategy. Assessments reveal that people who fit this category claim low or normal psychological perception of stress, but their bodies demonstrate substantial impact—at times stronger effects than those who report feeling stressed. This disconnect between physical reality and mental awareness potentially sets the board for more physical damage because these people’s recognition is so skewed or largely absent.

Multiple studies, for instance, show a correlation between repression and an increased risk for both cancer and cardiovascular disease. (1, 2) Subjects with higher anger and hostility measures, especially internalized anger expression, also have a greater risk for Generalized Anxiety Disorder.

Finally, for those of you who are partnered, a study of couples who stifle anger rather than express it indicates that those who hold their frustration in may be shortening their lifespan.

So, what’s the answer? Where do we go from here?

Should we express our negative emotions?

When is it helpful to vent? At what point is it a law of diminishing returns? And what do we do with the residual energy?

I’d argue there’s a more substantial issue here. As is usually the case in life, we have more choices than we imagine. Examining how we relate to our emotions cracks open the subject in far more interesting ways than simply asking “to express or not to express.”

And let me say this first. Sharing an emotion means something different than expressing it. When we intentionally share an emotion, we’re offering it to another person. How productive we are has everything to do with the way we communicate and the extent to which we take responsibility for our own feelings. (Hint: no one “makes” us feel a certain way.)

Are we managing our lives when we share how we feel, or are we merely shedding our emotional debris?

Expressing our emotions, however, can broaden the possibilities immensely (and may in some cases be the better bet). The intent to express (as opposed to share) our emotions suggests we’re looking for relief. Sometimes there is no solution to a particular situation, or expressing our emotion won’t be the catalyst that gets us there anyway.

It’s better in these cases to indulge the emotion in some therapeutic writing to experience a productive outlet or attempt some intensive exercise to burn off the excessive energy and flood the system with some feel-good inputs.

Alternatively, as I hinted at earlier, we can work with our relationship to our emotions. We can redefine our association with the feelings that threaten to overwhelm us and/or get us into hot water.

Minimizing the direct impact of our lesser angels isn’t about emotional bypassing, pretending to float above the natural but inconvenient and often unproductive responses we have to life with all its warts.

Mindfulness training, for example, teaches us to observe our emotions without identifying with them. It’s the difference between being with anger rather than simply being angry. We observe anger in our thoughts and in our body’s responses, but we situate ourselves as witness to those emotions rather than their captive source.

In doing so, we can own our responsibility for the psychological energy we steep ourselves in during any given hour and simultaneously loosen the choke hold it has on us. We learn to lightly hold our innate primordial volatility while also not taking it so darned seriously.

Thanks for reading today, everyone. Have you changed the way you express yourself as a result of prioritizing health and well-being? Share your thoughts, and have a great end to the week.