How Bad Is Charred Meat, Really? 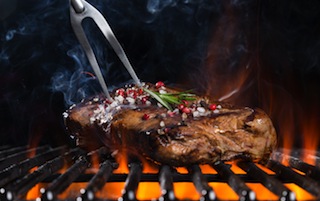 There’s nothing like charcoal-grilled meat. It’s not just the food itself, although that’s amazing. It’s the entire experience: being outside in fresh (albeit smokey) air, the sizzle when you slap that meat down on the hot grill, the smell of the smoke. Even the tools we use when grilling are bigger and savager and more rewarding than the dainty implements used inside. We don’t gently flip the steak. We grab it with huge metal tongs and throw it down. There’s less precision and more art. And the flavor can’t be found anywhere else. The smoke, the flame, the char, the grill marks, the color, the dripping fat—they are irreplaceable.

But is it healthy? Is that perfect sear costing you years off your life? Are those BBQ ribs adorning your colonic interior with pre-cancerous polyps?

That’s what we’ve been told happens. That’s what’s supposedly behind the relatively inconsequential increases in colorectal cancer risk seen in red meat eaters. In previous posts, even I’ve recommended gentle cooking techniques and cautioned against excessive intake of grilled, seared, barbecued, and fried meat, especially without using protective marinades and eating protective vegetables. I reiterated this stance a couple weeks ago in my response to the WHO report on red meat and colorectal cancer.

A couple nights back, I found myself hovering over a pair of lamb shoulder chops sizzling on a charcoal grill, watching the marrow render before my eyes, anticipating the blackened lamb fat and caramelized marinated meat. Could it really be so bad? Should I have dropped these chops into a pot of boiling water instead?

As it turns out, I may have overstated the danger of the carcinogenic compounds found in charred meat.

First, let’s look at heterocyclic amines (HCAs), which get the most bad press. HCAs form when sugars, amino acids, and creatine in meat react with heat. They can be carcinogenic in animal studies, and there are weak associations between colon cancer rates and estimated HCA intake in humans. The epidemiology has been covered. The animal studies purporting to show the carcinogenic effects of cooked meat compounds invariably use physiologically-irrelevant conditions; the doses of HCAs that cause colorectal cancer in animals are hundreds of 1000s times higher than the dose of HCAs humans get from cooked meat.

And when researchers try to cause cancer by feeding actual meat, they either come up empty or resort to restricting some nutrients and adding others until they get a hit.

They put the animals on a low-calcium diet. Calcium is known to inhibit the carcinogenicity of cooked meat, and researchers who want to observe colon cancer in lab animals know they have to limit the mineral.

They get things rolling by dosing the animals with powerful carcinogens. Which doesn’t even always work. In one paper, a bacon-based diet actually protected rats against colon cancer after they were injected with a known colon cancer promoter. That must have been an awkward moment in the lab.

They put the animals on a low-fat diet. Feeding well-cooked beef to rats on a high-fat (beef tallow-based) diet did not cause colon cancer in one paper, even after injection with a colon cancer-promoter. Only the rats on low-fat diets got cancer.

In addition to the mechanistic flaws, chicken is a major source of HCAs in the human diet, yet it’s never associated with colon cancer in these epidemiological studies.

A lot of things don’t really add up. While I wouldn’t say HCAs are healthy, I don’t think they’re a huge danger. And even if they’re valid and reflect causality, the associations between red meat and cancer are extremely weak.

Another candidate is heme—the animal-based iron that’s far more bioavailable than plant-based iron. It’s high in red meat and epidemiology links heme iron intake to colon cancer. Animal studies seem to show that heme iron can promote colon carcinogenesis, so what are the proposed mechanisms and do they apply to you and me?

The proposed mechanism with the most support is heme’s oxidative effect on fatty acids. In one study, feeding heme iron to rats promoted colon cancer only when fed alongside high-PUFA safflower oil. Feeding MUFA-rich and far more oxidatively-stable olive oil alongside the heme prevented the colon carcinogenesis. Oh, removing calcium from the diet also promoted colon cancer in the animals, as did the carcinogen they were summarily injected with at the start of the study.

A 2000 study purported to counter the claim that fat has an effect on heme’s toxicity, finding that whether fat was 10%, 25%, or 40% of a rat’s diet had no effect on the carcinogenicity of added heme. There’s no mention of the fatty acid composition of the added fats, but given that most rodent diets (especially 15 years ago) use corn or soy oils, it’s a safe bet that these rats were on 10%, 25%, and 40% vegetable oil diets. 10% of calories from PUFA is quite high and provides plenty of substrate for heme-induced peroxidation. 10% from PUFA may be the “ceiling” after which additional PUFA has no further effect.

A 2004 study had similar results, finding that meats containing medium to high amounts of heme—beef and beef blood sausage—promoted carcinogenic conditions in the colon, while low-heme chicken did not. Sounds bad for red meat, but take a look at the fat source in the animals’ diets: either corn oil or soybean oil, two of the most PUFA-laden, unstable fats available. Would the carcinogenic effects of heme-rich meat persist if the animals were eating MUFA or saturated fat-based diets?

If you’re eating lots of polyunsaturated fats with your meat, if you’re cooking your meat in bad oils, or you’re eating meat that’s been cooked in refined high-PUFA seed oils (like most prepared and restaurant food), heme may cause problems. Most people are, which may be why those modest associations between red meat and colon cancer exist. But you’re not doing that, are you?

If you’re still hanging your hat on the heme hypothesis, look again. Given the frequent (if unimpressive) relationship between eating well-done meats and colorectal cancer, you’d think that well-done meat must contain more heme iron than rarer meats. Only they don’t. A paper from 2012 sought to create a heme iron database for various meats according to cooking method. Across the board, the heme content remained unchanged whether the meat was well-done or rare.

In short, the arguments for HCAs and heme iron weaken under scrutiny, especially if we’re talking about people following the Primal eating plan, the paleo diet, or any real-food way of eating that eschews high-PUFA seed oils and emphasizes quality fruits, vegetables, spices, herbs, prebiotic fiber, and antioxidant-rich marinades.

I think I’ll keep enjoying my grilled lamb, and enjoying the grilling of lamb. Not every day, as there’s probably an upper limit and there are so many other good things to eat, but I’m not worried.

What about you, folks? Do you still enjoy grilled/seared-on-the-outside-rare-in-the-middle red meat?