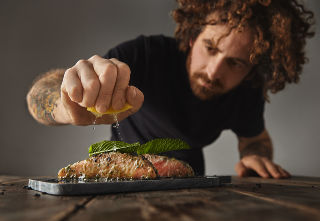 One of the more exciting developments over the past few years has been the explosion in population genetics research. People are a diverse lot, and even though we’re all people who essentially want the same things out of life (and we’re working with the same basic machinery), there’s a lot of wiggle room. It’s not just information for curiosity’s sake. The information researchers are uncovering about human ancestry can have real ramifications for how said humans should eat.

A couple years ago, I wrote a post laying out a few guidelines for using your personal ancestry to inform your diet. Today, I’m going to talk about another one: polyunsaturated fat metabolism.

For years, it’s been “common knowledge” in alternative health circles that most people just aren’t very good at converting the omega-3s (ALA) in plant foods into the long-chained omega-3s found in seafood (DHA, EPA), and that everyone should just eat fish for their omega-3s. This remains solid advice, but the reasoning needs a little tweaking. It turns out that the genes that encode the proteins responsible for conversion of ALA into DHA/EPA (and linoleic acid into arachidonic acid)—known as FADS—have a couple variants. Some variants make conversion less effective and some make conversion more effective. Furthermore, the distribution of these variants vary across populations.

For instance, the variant that increases conversion of ALA into DHA and EPA is more common in South Asian (Indian, Pakistani, Bangladeshi, Sri Lankan) populations and African populations than any other group, while it’s moderately common in Europeans and East Asians and rarest in Native Americans and Arctic natives. Why?

In Africa, anatomically modern humans initially crowded along the coasts because that’s where the food was, especially the omega-3-rich seafood that provided the nutrients necessary for brain expansion. When humans began expanding into the omega-3-deficient interior of the continent, those with the FADS gene variant for improved long chain PUFA conversion were more successful. They could live in areas totally bereft of marine foods and still make enough EPA and DHA to survive and produce big-brained babies. Researchers estimate that the new variant became entrenched in African populations around 85,000 years ago due to positive selection. To this day, African populations almost exclusively carry the variant that increases conversion.

Then, as modern humans left Africa and moved into Europe and Asia carrying that same genetic variant, they encountered new environments that placed new demands on their genes.

In South Asia, the gene variant persisted. Plants were plentiful and long-chained omega-3s were not due to warm water reducing the omega-3 content of marine life, and the ability to efficiently convert fats offered a survival advantage. About 3/4 of the population carries it today.

In East Asia, about 1/2 of the population carries it.

In Europe, meat and fish were more widely available. Conversion was less necessary when you had a regular intake of pre-formed EPA, DHA, and arachidonic acid. Thanks to European admixture with existing archaic populations who still had the conversion-decreasing variant, its frequency increased until the arrival of farmers from the East, whose agricultural innovations selected for and genes contributed to the conversion-increasing variant.

In Native American populations, including Arctic, North American, and Latin American natives, the variant is almost completely absent. They were getting all their long-chain PUFAs directly from animal and marine foods, and it shows in the genes.

That’s a broad overview. The story’s more complicated than that, of course. East Asia is a big place with many different ethnic groups. Same goes for Europe, and Africa, and everywhere else. Except for the Africans and Native Americans, the frequency of the variants vary within these populations.

The ancient European groups that fed into modern populations followed a similar north-south pattern of variance. West and Scandinavian hunter-gatherers in the north show the least selection for the variant, since the cold waters of northern Europe offered plenty of cold water fatty fish and elongation of plant omega-3s just wasn’t very helpful or necessary. Pastoralists and farmers to the south show the most selection.

What’s it all mean?

Indigenous ancestry (unless African) probably means you’re a carrier of the decreased-conversion variant. Alaskan or Greenland Inuit, American Indian, Mexican mestizo—they tend to have lower FADS activity due to the relatively recent inclusion of agricultural foods in their ancestral diets. The farther north your people hail from, the more likely you are to carry at least one copy of the decreased-conversion variant.

If you carry the FADS variant that increases conversion:

If you carry the FADS variant that reduces conversion:

I would take the time to get your ancestry tested, unless you’re absolutely certain of your family tree—and it stretches far enough back to actually say something about your deep ancestry. That way you can look at the various populations from which you hail and make some educated guesses. And you can even plug the raw genetic data into a service that spits out your nutrition-and-health-related variants.

Even then, you may not get any hard and fast answers. FADS gene variant frequency data isn’t widely available for every possible ethnic group on Earth, so a lot of this is more art and intuition than hard science.

If the traditional diet of your immediate ancestry is plant-based—not vegan, just not buying steak from the non-existent grocery store—you probably carry at least one and perhaps two copies of the conversion-enhancing variant.

If your people lived near the sea or ate a decent amount of animal foods, you’re probably carrying one of the conversion-reducing variants.

Whatever you do, take it easy. Have fun with it. Very few people represent the tail end of an unbroken line of ethnic purity. Most people will vary a bit here or there, or a ton here and a ton there. I have a lot of Scandinavian ancestry, which explains my need for a lot of pre-formed DHA and EPA from wild seafood (I’ve confirmed with genetic tests).

As this topic is a moving target, with new data coming out constantly, I’ll probably revisit it from time to time. Until then, what do you all think about the field of ancestral influence and health? What’s your ethnic background, and what do you think it means for your ability to metabolize PUFA? And what other questions do you have regarding ancestry and diet?

Will Saturated Fats Kill Your Cells?

Mark Sisson is Not Afraid of Fats