Hope Has Been Restored: My 21-Day Challenge Results

My story is not so much one of success as it is one of hope. I do not have any drastic weight loss to report, I still cannot do a pull-up, and I still have difficulty sleeping through the night. However, after slowly attempting to go Primal in November, and fully committing to it through the 21-Day Challenge, I have already experienced positive results.

In my mid-30s, I began suffering from several random health problems, which slowly appeared over the course of two years while I was working at an extremely stressful job. I have a touch of Avoidant Personality Disorder, so daily life is very stressful for me as it is. Anyway, I went from exercising regularly, working normal hours, and having fun to not exercising at all, eating unhealthy foods, and sitting 11 hours a day.

Over time, I developed low Vitamin D, swollen legs and feet, clogged/stuffy ears, a sinus infection, a skin rash, reflux, eye inflammation, hives, and fuzziness in my mouth when eating. Although I always had horrible menstrual cramps, they became even worse. Additionally, I gained belly fat. I was depressed, I was irritable, I could not sleep, and I was extremely unhappy.

Eventually, I found another job, I began working normal hours again, and I started to have fun again, however none of these symptoms went away. I still had no energy and I was not able to exercise as I had in the past. Most of the doctors I saw during this time gave me medications to take for the symptoms. They told me that since I was not overweight and I exercised, that I would be fine.

When I turned 40, a new doctor requested I get a healthy mammogram on record. So, I went and got the mammogram, only it was not healthy. I was diagnosed with Ductal Carcinoma In Situ (DCIS), also known as breast cancer. As it was discovered so early, Stage Zero, I only needed radiation, not chemotherapy. I had a lumpectomy to remove the cancer cells, I went through radiation, and now I am taking Tamoxifen because my tumor was estrogen receptor positive.

Upon getting the diagnosis, I felt as if I had done something wrong. I also felt that there must have been something I did not do, but could have, to prevent it. The doctors looked at me and said, “No, it’s not you. It just happens.” This was not enough for me, however. I had to have answers. I began searching the internet for causes and prevention, hormone receptors, endocrine disruptors, toxins in our foods, toxins in the environment, xenoestrogens, phytoestrogens, and alternatives for diet and exercise.

I am not sure when I began to read Mark’s Daily Apple on a regular basis. It seemed that I would search the internet for something, and a post from MDA was always among the first few links. Eventually, I just went to MDA first instead of Google. I found a great wealth of information on nearly every topic I looked up. I tried to incorporate some of the elements of the Primal lifestyle, but I never had any reactions to food or allergies, so I looked at Primal eating as a guideline and did not strictly adhere to it.

Then one day MDA had an announcement about Neely Quinn’s online conference: For Women Only: The Weight Loss Solution. I did not sign up. It was not for me. “Sure, I need to lose 10 pounds, but she isn’t going to tell me anything I don’t already know,” I thought.

The morning of the first day of that web conference, however, I woke up with vertigo/labyrinthitis. I could not stand up, I could not balance, and if I did not stay laying down flat on my back, I would throw up. I spent the day at home, but I had to finish a project for work so, I got out the computer (I have a trackball mouse and a split keyboard so I could actually work lying down). When I finished the project, I went to MDA and saw a reminder about the For Women Only: The Weight Loss Solution web conference. Well, I had nothing to do all day, but lay flat, so I signed up for the conference and I listened.

After listening to all the speakers on the web conference over the next few weeks, and searching MDA for more detailed information about all of these new topics, I felt like there was hope for the first time in almost a year. There was an explanation for all my symptoms and even my estrogen issues! I was surprised that all of my symptoms seemed to be connected to stress, diet, and exercise. There were even discussions connecting my vertigo to gluten. Finally, things started to make sense. It was as if a switch had been flipped. I had discovered that there was a way for me to take control of my health, there were answers, I could do something, and Mark’s Daily Apple was telling me what to do. Immediately I decided to follow MDA’s primal way of eating more strictly. First, I cut out the grains. Then I realized that dairy was making my mouth fuzzy, so I stopped that too. Next was a drastic cut back in sugar. Finally, I stopped exercising so much.

The results I have experienced, even in so little time, have been positive. I sleep better, my legs and feet are not swollen, I have energy after long walks, my skin is clearer, I no longer have hives, or reflux, and I have not had a cold or sinus infection this winter (I have been getting them every winter for at least the past five years). The most shocking result I have experienced though is that I have had NO menstrual cramps at all (and no, it is not the Tamoxifen – that makes them worse). I used to spend the day in bed with the hot water bottle and a jar of ibuprofen every time I got my period. Now, I only have temporary discomfort that lets me know it is there. I never would have believed that diet had such an impact on hormones until I experienced this change myself. 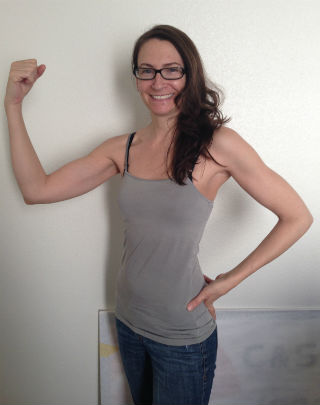 Things have only continued to get better since I decided to participate in the 21-Day Challenge. As I mentioned above, I have extreme social phobia. You will not find me on Facebook or Twitter, I am not on LinkedIn or Pinterest, and I do not Instagram. However, I committed to the challenge, and in the past week, I posted my thoughts on the Vimify challenge app, I commented on MDA, and I forced myself to leave the house and do something (semi-social) for the PLAY activity.

I still have a ways to go, but I have a goal now. My next step is to save up some money (still paying medical bills), find a primal doctor, learn to balance my hormones naturally, and see if I can stop taking the Tamoxifen. This is an amazing transformation for me, as a year ago, I felt as if my life was over. I am so thankful to Mark for providing all this information, for making it free, and for encouraging my participation. Thank you Mark.