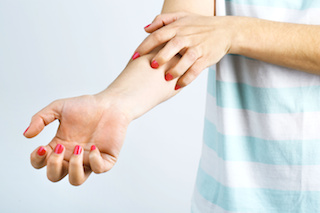 For today’s edition of Dear Mark, I’m answering one question. But it’s a doozy: histamine intolerance and what to do about it. Now, this is a huge question. As you’ll read below, there are numerous causes, many overlapping. There’s no easy fix. There may not even be a hard fix. However, we can almost certainly improve the situation. In today’s post, I offer Laura my take on what to do about histamine intolerance based on my reading of the available literature. It’s not perfect, mind you. It’s complex and often seemingly contradictory. But that’s how it is with the human body, isn’t it?

I hope you can one day shed some light on histamine intolerance. I am extremely sensitive to histamine and also found out that I am mutated for the DAO enzyme, making my problem even worse. I’ve found it very hard to eat primally, since most of the foods promoted like bacon, sausage, cheese, wine, onions, lemons, vinegar, keifer/kombucha/kimchi, bone broth, and a lot of veggies and fruit, etc., all either contain high histamine or induce mast cells to release histamine, causing a huge reaction. I’m sure other people in the primal community are suffering from this as well and would also appreciate any insight you might have.

Just so everyone knows, histamine isn’t “bad.” It’s a normal biochemical produced by immune cells during certain immune responses that produces some unpleasant but necessary effects. The stuffy nose we get during seasonal allergies is histamine’s most famous product, but it’s also involved in bronchoconstriction, hives, the immune response to bug bites and stings, alterations in blood pressure, and vasodilation. Histamine also promotes gastric acid secretion and acts as a neurotransmitter that can increase and inhibit the release of other neurotransmitters. Histamine is only bad when your body can’t break it down fast enough or you simply make too much.

Bad gut bacteria: Many gut bacteria produce histamine themselves. If these histamine-producing strains are overrepresented in your gut, you may suffer negative symptoms from any extra histamine.

Why might a person be unable to break down histamine?

A Primal lifestyle is a good idea, but it’s not everything. And because many of our favorite Primal foods are high in histamine or, as you mention, induce the mast cells to release it, when you can’t break down histamine effectively, even eating cherished Primal fare can produce negative symptoms. These foods include but are not limited to:

The longer a food is exposed to bacteria or yeasts (even recently cooked food sitting out, IOW leftovers), the more time those microbes have to convert the amino acid histidine present in foods to histamine.

Many slow cooked foods, like bone broth, also increase histamine content and can be problematic in sensitive individuals. For a complete list, check out Chris Kresser’s post on histamine-rich foods (and prepare to be sad). They won’t trigger everyone with histamine intolerance, but it helps to know the potential offenders.

What can you do except avoid histamine-rich or histamine-producing foods forever?

Check your intake of nutrients, foods, and supplements that support histamine metabolism and tolerance. Will they cure you? No, unless a frank deficiency in said nutrient is the proximate cause of your histamine intolerance. Might they make you feel better in the short term (which is incredibly important and shouldn’t be discounted)? Yes.

Support the liver. As HNMT (the other enzyme that nullifies histamine) activity takes place in the liver, a healthy liver is crucial for histamine intolerance.

Watch stress. Corticotropin-releasing hormone (CRH) stimulates mast cells to release histamine. But CRH also releases cortisol, which inhibits histamine secretion. In normal circumstances, with acute, short-lived stress, this works to oppose excessive histamine. In chronic stress, things change. We become resistant to stress hormones, and cortisol loses a bit of its histamine-inhibiting luster. We’re releasing massive amounts of histamine-stimulating CRH, but the cortisol is unable to stem the tide. So: watch stress. Avoid it, limit it, mitigate it, or rethink it. And consider an effective adaptogen/herbal supplement to get yourself over the hump when you need it. (I swear by this one.)

Maintain optimal sleep hygiene. The activity of mast cells adhere to one’s circadian rhythm, so getting inadequate light during the day, excessive light at night, going to bed too late, and neglecting one’s circadian hygiene in general will likely perturb histamine tolerance.

It’s a messy story with too many threads to easily follow, but you can try a few things. Let me know how things go for you, Laura. And everyone else, let’s hear about your experiences with histamine intolerance down below. What worked? What didn’t? What else should Laura try?