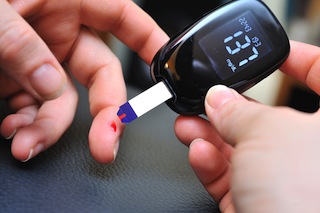 For today’s edition of Dear Mark, we’ve got a three-parter. First, what could possibly explain an ardent and otherwise healthy low-carber with stellar postprandial (i.e. after a meal) blood sugar levels showing up with an HbA1c reading indicative of pre-diabetes? Who’s messing up — the test or Nancy herself? Next, that pastured chicken you’re about to eat may very well be local, but what about the glycogen in your quads? Is a muscle’s glycogen usable only by that muscle, or can it be shipped to nearby muscles as well? And finally, a reader reports suddenly becoming unattractive to mosquitoes upon adopting a low-carb diet and bouncing in and out of ketosis. Is he imagining things or is there a potential mechanism at play?

Thank you for all you do! I have been a loyal follower for many years. After my husband was diagnosed with diabetes, I decided to commit to low carb – both as an example for him, and for my own long-term health.

At a recent physical, my doctor reported that my A1c was 6.0. As such, I have been labeled as “pre-diabetic” (which I am certain will raise my health insurance premiums). However, she also reported my triglycerides at only 48!

I have been taking my blood glucose levels each hour for the past three days and they are (with very few exceptions) below 100. Even the few readings after chocolate are still below 128.

What gives? Can you explain?

I want to tell my doctor that the A1c is wrong, as I am pretty certain that it is! Any suggestions?

Actually, your A1C reading is probably correct, but you may not have to worry about anything. The power of the test relies on a major, but common, misconception about human physiology.

HbA1c measures the degree of glycation of your red blood cells’ hemoglobin; this is an indirect measure of how much blood sugar your cells are exposed to over time, since a red blood cell that’s exposed to more sugar in the blood over its life cycle will have more glycation. Thus, A1c seeks to establish the average level of blood sugar circulating through your body over the red blood cell’s life cycle, rather than track blood sugar numbers that rapidly fluctuate through the day, week, and month. It’s a measurement of chronic blood sugar levels, not acute. Sounds like a powerful metric for establishing diabetes risk, right?

Furthermore, anemia can falsely increase HbA1c by decreasing the number of red blood cells (which need iron to fuel their production). If you have fewer red blood cells in circulation, the ones you do have accumulate more sugar since there are fewer cells “competing” for it. Anemia is a serious health condition, but it doesn’t mean you have diabetes.

HbA1c presupposes that everyone, everywhere has the same number of red blood cells in circulation living identical life cycles. It’s predictive over populations (and in most of the populace, a high HbA1c is cause for alarm), but in individuals it offers less value.

A better use of HbA1c is to track your personal trends. If HbA1c is going up over time, then you can and should worry. But if you have great blood sugar control (which likely prolongs the life cycle of your RBCs and gives them a better chance to accumulate sugar) and a high-ish HbA1c that remains stable, don’t freak out right away. Also, make sure you’re not anemic. And, of course, discuss all this with your doctor.

Long time reader, books and blog. I’ve read your different postings on glycogen usage by organs and you mentioned liver glycogen can be used by any system that needs it while muscle glycogen can only be used by the muscles. My question is, to dig deeper on that, is the glycogen available only to the specific muscle that is storing it, or can it be used by nearby muscle as well? i.e. a long squat workout would deplete only the quad stores and not any other muscle stores, correct?

Correct. Muscle glycogen is totally local. Quad glycogen can’t be exported out to calf or hamstring muscle. Or the liver, as you note.

That’s why I like full body compound movements so much. The long squat workout you mention would only deplete the muscle groups it utilizes, but the muscle groups it utilizes are vast and encompass far more than just the quads. Yes, the quads but also the hamstrings, glutes, trunk musculature, and even the upper back are all called into action when squatting with a weight on your back.

Many people have noticed that doing the compound movements, especially with heavy weights, really gets the appetite going and improves nutrient partitioning. A common observation is that you can eat and eat on a program like Starting Strength without gaining as much unwanted body fat as you normally would eating that much. A big reason why is that your muscles become bottomless pits demanding endless amounts of glycogen.*

*They don’t actually become bottomless pits, and you can’t really eat endless amounts of food without gaining fat just because you’re on a 5×3 compound lifting program. But it sure does feel like that sometimes, doesn’t it?

I have experienced an epiphany! As a long term Dr. Atkins disciple, I have recently adopted the Primal Blueprint philosophy at the recommendation of my cardiologist. I have read your book, am following a low-carb lifestyle and am offing ketones as I burn fat.

As a dedicated gardener and yardman selfie, I spend a lot of time outdoors, often amongst many mosquitoes here in springtime North Texas. I have discovered in the last 2-4 weeks that the mosquitoes seem to have no interest in sucking my blood. Not one bite this spring, when in years past I have suffered many, in spite of Deet. Not one. I have checked the internet for articles on ketones repelling mosquitoes and there seems to be quite a history of that “miracle”.

I am truly convinced that I am benefiting from that Primal condition. As our primal ancestors daily burned fat & not carbs, they benefited from a natural pest repellant that we today can do as well. Perhaps you should include in your message that reducing carbs eliminates harassment by pesky mosquitoes! Check it out…

Thanks a bunch for what you do…truly makes a difference!

Interesting. There may be something to it. When you go very low carb or reach ketosis (or even just reduce carbs), your respiratory quotient (RQ) drops. This means you’re exhaling less carbon dioxide for each unit of oxygen consumed, and it’s a strong indicator of fat burning versus sugar burning.

What’s this got to do with mosquito bites?

Mosquitoes are attracted to exhaled carbon dioxide because it means a live mammal (or human) is nearby and available for feeding. Other odors are also indicators of mammals, but they’re not as time sensitive. A mosquito might smell our body odor left on some linen, or smell our excrement, and we could be miles away. But CO2 is only emitted by living, breathing, delicious mammals in the immediate vicinity. Perhaps by residing in ketosis, you’re exhaling less carbon dioxide than the people around you and this shields you from the mosquitoes’ attention.

Other blood sucking parasites, like ticks, are also drawn to CO2. There’s even a machine called the “Tick Rover” that emits carbon dioxide as it drags insecticide-treated fabric around a tick-infested yard. It works really well, netting and killing between 75% and 100% of the ticks in a given area.

It wouldn’t surprise me if your hunch was correct. I doubt there will ever be a study on this, so let’s get anecdotal:

Any readers notice similar changes as Garth? Have you become less attractive to parasites since dropping carbs? Anyone in full-blown ketosis notice anything in that regard?