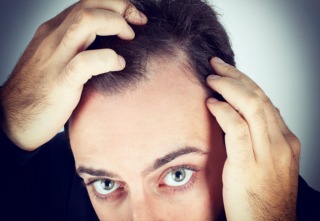 Conventional wisdom teaches us to accept our fate when it comes to hair loss. “Runs in the family,” we’re often told—and sometimes it does (but that’s usually not the full story). “It’s just part of getting older,” people say, too—and there we again find only partial truth at best.

But the Primal path is one of thoughtful scrutiny, not blind acceptance. While most people would file hair loss under aesthetic concerns (ranging from neutral to negative depending on social norms and personal views), it’s not always that innocuous. Let’s look today the bigger picture behind hair loss and the situations in which it signifies a genuine health concern.

To those in the know, androgenetic alopecia (AA) is the number one form of progressive hair loss. The term can be a little misleading: while it translates to male-pattern baldness, it also encompasses a condition called female pattern baldness. The “andro” derives from dihydrotestosterone, the so-called male hormone that specialists believe to be the primary cause of AA. It’s estimated that half of men over the age of 50 and half of women over the age of 65 have this form of hair loss, and the young people can be affected as well.

The theory goes that every hair follicle on your scalp is genetically predisposed to either be susceptible or resistant to increasing levels of dihydrotestosterone as you age. Those whose hair follicles are sensitive to this hormone will see a steady decline in hair as they age, while those who dodged the genetic bullet can retain their hair into their later decades…provided they don’t succumb to any number of other hair loss factors.

The theory implicating testosterone developed back in the 1940s, when James B. Hamilton reported the notable lack of hair loss in “old eunuchs who were castrated prior to sexual maturation.” It stood to reason that testosterone, which Hamilton assumed wasn’t being produced in any significant quantities post-snip, was the cause of hair loss in “intact” men. In 1980, a team of scientists refined this theory when they discovered a group of pseudohermaphrodites living in the Dominican Republic who had normal testosterone concentrations but lacked an enzyme that converted testosterone into the “hair follicle damaging” dihydrotestosterone.

The rest was history. Pharmaceutical opportunists caught onto the findings, and began pumping out early equivalents of today’s Rogaine and Propecia. Research-wise, not a lot of progress has been made since.

The Problem with a Fatalist View on Genetics

An study published last year in the International Journal of Trichology got me thinking. Researchers examined the medical and family history of 210 patients with female pattern hair loss, finding that close to 85% of the patients had a history of AA. Nothing new there.

But there was more at play: the study also found that the hair loss patients also had a high incidence of hypothyroidism and hypertension, and most were deficient in vitamin D. Clearly, all of these factors are influenced primarily by diet, stress, and other easily-altered variables.

This presents a problem for the fatalist alopecia soothsayers and drug companies alike. The issue with flat-out blaming genetics for something like hair loss is that there’s always confounding factors. For example, if someone has a family history of hair loss, does that family also have a gluten/dairy/egg/nut sensitivity that they don’t know about? Does that family have a ravenous sweet tooth, and therefore consume vast quantities of delicious but inflammatory sweeties? It’s easy to blame genetics for all of life’s maladies, but the waters muddy a little when a “predisposition” is intertwined with unhealthy habits, diet, or food allergies.

An alternative hair solutions blogger Danny Roddy agrees. Drawing on extensive research from Dr. Ray Peat, Roddy firmly dismisses the “genetic determinism” mindset and argues that the decades-old research upon which our current hair loss notions are based is inherently flawed. Roddy suggests that baldness and most genetic-derived hair loss conditions are due to environmental factors.

Crucially, Roddy also points out that those with androgenic alopecia don’t actually exhibit higher than normal levels of testosterone, implying that there are other elements at play here. Many recent findings also suggest that the so-called “sensitivity” of androgen receptors in the scalp doesn’t vary between balding and non-balding people.

The point here is that mainstream perceptions of common hair disorders may be a little off the mark. The other thing to remember is that “risk” doesn’t equate to “inevitable.” Just because your DNA puts you at a greater risk of losing your hair, that doesn’t seal the deal. Let’s examine a few other salient factors.

Stress is bad news for your health. And your hair is no exception. Acute, extreme stress provides the primary mechanism by which your hair can start falling out, a condition known as telogen effluvium. This type of stress could come in any form—emotional trauma, physical pain or injury, that kind of thing. Cutting off blood flow and nutrient cycling to your hair follicles is the body’s way of focusing on the vital areas that are critical for survival during what it perceives to be a time of extreme hardship.

A recent study published in the American Journal of Pathology was one of the first lab tests to actually illustrate the short term effects that telogen effluvium can have on mammals. Using substance P as an acute stressor on mice, researchers were able to demonstrate that psycho-emotional stress altered hair follicle cycling, reduced the duration of hair growth, and exposed hair follicles to inflammation.

The second hair-fall mechanism is chronic stress. Low-level but continuous stress, perhaps in the form of incessant background noise, poor diet, or drawn out work troubles, has been shown to contribute to hair loss. Chronic stress can also occur as a negative feedback loop, whereby the stress of worrying about your hair falling out actually contributes to it’s continuing demise—the self-fulfilling prophecy.

The solution is obvious but not always easy: identify the stress and minimize it. The building blocks of stress management are always going to include diet: eat nutrient dense foods like organ meats, a wide range of vegetables, grass-fed dairy and pastured eggs. In addition to providing a wide range of other vital nutrients, these foods are also rich in biotin, which has been shown to be an effective treatment for certain forms of hair loss. Otherwise, you know the drill: scale back on the stress-inducing lifestyle factors, take more time for yourself, ensure regular nature immersions, and consider beginning a meditation or other relaxation-focused practice.

Despite the doubt surrounding genetic precursors to hair loss, there’s no question that hormonal imbalances play a key role in the state of your hair. Long-accepted hormonal contributors to hair loss include:

While prescribing hormone-specific solutions for your hair is a whole article in itself, the key here is to focus on but one word: balance. As cliched as it sounds, true health is achieved by balancing all the systems, processes, inputs and outputs in your body…and the same is true for hair loss. Your first step might be to do a hormone test, or it might be to get back to basics with diet and lifestyle.

Luckily, a Primal way of life is a great way to start balancing out your hormones. Encouraging a shift away from excess carb consumption should go a long way towards improving insulin sensitivity, while steering clear of gluten and other potential food allergens (and making sure you’re getting ample selenium) can allow your thyroid to regain some semblance of normalcy. Excess testosterone typically isn’t an issue for folks like us, as a diet rich in whole foods helps to regulate its production and restore ratios between estrogen and testosterone.

Beyond CW, there’s a potential gollum lurking in the shadows: prolactin. Prolactin is secreted by the pituitary gland during pregnancy, and during times of stress. Prolactin is the mortal enemy of progesterone, one of the “female” hormones that also plays an important role in men.  Progesterone blocks the effects of testosterone, leading some to believe that reducing the levels of prolactin in the body and thereby promoting progesterone secretion is a key element of supporting healthy hair growth. Because there’s very little research to back up these claims, aside from the musings of Dr. Ray Peat, this is a difficult one to explore further.

Nonetheless, reducing prolactin activity in your body certainly can’t hurt. Getting plenty of zinc, along with calcium and its cofactors should help to keep prolactin in check. Reducing alcohol intake and cutting out sugar can also encourage estrogen regulation, which plays a role in prolactin secretion. Experiment with foods and ratios, and see what works for you.

I could ruminate all day on the various health conditions that lead to hair loss. Cardiovascular disease, hypertension, diabetes, hypothyroidism. The list goes on.

To me, the one which slips under the radar time and again is autoimmunity—particularly in the case of alopecia areata. If your hair loss is patchy rather than general thinning or receding, look to common autoimmune triggers for the answer. Healing your gut should be the first line of defense, which may be as simple as cutting out grains and upping the probiotics. It could also require more focused action, with something more along the lines of an autoimmune protocol.

I’ve already touched upon dietary changes that can be promoted to treat certain hair loss causes. Still, suffice to say that if you’re following a relatively Primal-friendly eating plan, but still lacking in certain nutrients, you may need to explore efforts more close in. Women should keep a close eye on ferritin levels, as iron deficiency has been associated with up to 90% of hair loss cases. Many women with thinning hair also respond well to lysine supplementation.

For men, zinc and copper deficiencies may play a role in hair loss—particularly in the case of androgenetic alopecia. Because zinc is often lacking in many a person’s diet, it’s worthwhile upping your zinc intake primarily from food sources like grass-fed dairy, red meat, and nuts.

At the other end of the spectrum, overdosing on vitamin A is also thought to contribute to hair loss. Vegetables like sweet potato, carrots, and dark leafy greens should be providing more than enough vitamin A to meet your daily quota, so cut back or cut out vitamin A supplementation if hair loss is an issue.

Thanks for stopping by, folks. What’s your experience been with hair health? Have any of you achieved hair loss reversal with certain key changes to your diet, lifestyle, supplementation or other means? To all celebrating today, Happy 4th!