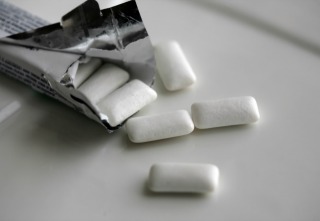 For today’s edition of Dear Mark, I’m answering four questions. First, is sugar-free gum okay to chew without worrying about insulin spikes? Next, is acacia fiber a good choice for a keto person trying to get more fiber and reduce constipation? Third, what can a person who has tried seemingly everything do for nighttime muscle cramps? And finally, why might a person’s body odor get worse on keto?

Hi I hope this is not a dumb question but Will chewing sugar free gum cause an insulin spike? I’m currently going keto (loving the new book by the way!!) I work in close contact with the public and am always aware of breath freshness so I chew a lot of gum and just worried that it may be defeating my good intentions

You should be fine depending on the type of sweetener.

Most sugar-free gums use xylitol and/or erythritol, neither of which have any significant effect on insulin release. There’s certainly no spike.

Sometimes you’ll find other, artificial sweeteners on the label. Although the effects of these on insulin responses are mixed or inconclusive, there are other reasons to steer clear of them.

I’d suggest checking your labels and opting for varieties that are sweetened solely with sugar alcohols. And there are no dumb questions!

What are your thoughts about acacia fiber? I have chronic constipation and that has helped me in the past

Acacia fiber is great. Tremendous source of fiber, and not many people know this, but it’s a prebiotic fiber. So you get the bowel movements that are just out of this world and your gut bacteria will be very, very, very happy. The gut motility it promotes, let’s just say your gut has never been more motile.

I know a guy—great guy, did a little business with him back in the 90s—who beat a week-long case of keto constipation using acacia fiber.

Add it to yogurt and that yogurt is better at treating IBS than regular yogurt.

I have been experiencing pretty severe leg cramps while sleeping. I take a magnesium supplement. I’ve been drinking Natural Calm at night. I eat avacodos almost daily. I drink plenty of water. The cramps are all through the night very disturbing. I’ve been on the keto diet for 6 weeks. Any suggestions what else I could do?

First, you’ve got most of the relevant electrolytes handled. I’d make sure you’re eating enough salt, too—add salt to taste whenever you cook or eat, drink salty broth or bullion.

And nothing’s working. The cramps keep coming. Is that right?

I’m actually not very surprised that you’re still having cramps. Contrary to popular belief, studies find that neither electrolyte status nor hydration status predict your propensity to cramps. And the evidence for magnesium’s effect on cramping is mixed. Can’t hurt to take it. Just don’t count on it for the cramps.

For example, pickle juice works against cramps, and not by restoring hydration or electrolytes. It actually reduces active cramps faster than you absorb the water and electrolytes by triggering a set of activators in the brain known as TRP ion channel activators, which influence skeletal muscle contractions.

Other TRP ion channel activators are found in cayenne pepper, ginger, and cinnamon, and researchers have created a blend of extracts from all three plants called Hot Shot that shows efficacy against muscle cramps.

Hey Mark, I’m wondering if you can speak to the body odor side effect that many of us have been talking about: experiencing increased body odor in ketosis, especially underarm (people talk about breath but that’s not my primary concern atm). Is there an imbalance that you know of that causes this? On fbook groups people point to detoxing from previously poisonous foods, but I’ve been strict paleo/primal for 6 years, so not sure that’s what it is for me.

The literature on diet and body odor is pretty thin.

In 2006, Czech researchers placed men on either a diet containing red meat or one without red meat, then had them sweat. Women smelled and rated the sweat. Across the board, the red meat dieters produced less attractive body odor. When they had everyone switch to the other diet, the results persisted: Those who had switched to a no-red meat diet produced better-smelling sweat.

It sounds damning, but before you stop eating beef and lamb, check out the details. The non-red meat diet differed from the red meat diet in many ways. The non-red meat dieters weren’t just avoiding red meat; they also ate way more fruits, vegetables, eggs, cheese, and soy than the meat eaters. The researchers failed to control all other aspects of the diet, instead focusing only on the meat.

I’ve said many times before that keto dieters tend to eat less produce, either because they don’t like it and see keto as a free pass for near-carnivory, they worry about the carbs in produce throwing them out of ketosis, or they somehow think plants are restricted on keto. These are mistakes. Common ones. You can eat plenty of produce on keto. You should eat plenty of produce on keto. Mushrooms of all kinds. Leafy greens. Cruciferous veggies like broccoli, cauliflower, bok choy. Low-carb fruits like berries. Anything fibrous.

I haven’t seen any legit reasons why a keto diet in particular would increase body odor. Try eating more plants and reassess in a week.

That’s it for this week, folks. Thanks for reading, and be sure to add your own comments down below!