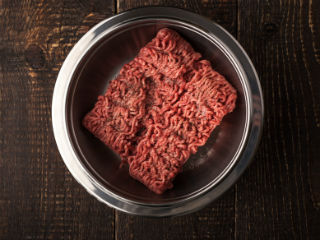 For today’s edition of Dear Mark, I’m answering four questions. First, are ground meats actually better for your glycine:methionine ratio, seeing as they contain all sorts of weird bits? Next, are the dairy proteins casein and albumin worth including in one’s protein arsenal? Third, is eating beef heart for its CoQ10 content another example of “eat like for like”? And finally, what’s my take on a recent article in the Atlantic about the futility of commonly-available probiotics?

I’m curious about the collagen/gelatin/glycine content of ground meats vs. their wholesome counterparts. Since ground beef, for example, usually contains connective tissue (etc.), could it be considered a more well-balanced source of various proteins (assuming it’s the grass-fed, well-educated, impeccably-mannered stuff, of course)?

Yes. If you break beef products down by glycine to methionine ratio, after pure suet and thymus, ground beef has the most favorable numbers. Specifically, 70/30 ground beef is the best, followed by 75/25, and so on. For whatever reason, Nutrition Data doesn’t include any gelatinous beef parts like oxtails or cheeks which would probably outpace the ground beef.

Still, I don’t think a diet of burgers will get you to the glycine promised land. You’d want to include some nearly pure sources of glycine like pig ears.

And yes, make sure your ground meats come from animals with at least some postgraduate education.

What do you think about casein and albumin? Casein has many drawbacks, it seems.

Here’s how it went. Rats were placed on one of the two diets and given a small dose of aflatoxin each day. Aflatoxin is a fungal toxin found in improperly stored grains and legumes, and it’s been shown to reliably induce cancer.

The rats on the low-casein diet were more vulnerable to acute aflatoxin toxicity—they were more likely to die right away from aflatoxin poisoning than the high-casein rats. Their growth was severely stunted, reaching just half the normal adult body weight. They developed severely fatty livers. And when another group of young rats on normal feed were placed on the low-casein diet, they stopped growing altogether. But yes, they didn’t die from liver cancer like the others.

The rats on the high-casein diet lived longer—long enough to develop liver cancer, which eventually killed them. But they grew well, developing into full-fledged adult rats. They were far more resistant to acute aflatoxin toxicity. And, believe it or not, they were actually more resistant to getting cancer in the first place. Once they got cancer, casein worsened the prognosis. But higher casein intakes protected against cancer initiation.

That’s not to suggest there aren’t issues with casein. There’s the A1 vs A2 debate, the dairy protein intolerance problem. But I wouldn’t say casein is “bad.” It can be useful, especially if you’re lifting heavy things. I wouldn’t get all of your protein from casein (which would be impossible without purified casein powder). But as part of a balanced intake of various protein sources? Yeah, eat some dairy.

Albumin is another protein found in dairy. Raw albumin, from raw dairy, contains a rare chain of amino acids that increase glutathione synthesis when consumed in their raw, undenatured state. Raw dairy proteins like albumin may be responsible for the improved immune systems seen in kids who drink raw dairy from an early age. Pasteurization destroys a majority of albumin.

And what about eating heart for a source of coQ10?

Animal heart is probably the best source of CoQ10 in the diet, and research shows that CoQ10 is extremely important for heart health:

It’s not just good for the heart, of course. CoQ10 is an “essential nutrient.” Plus, remember that CoQ10 isn’t some synthetic aberration cooked up in the lab. We produce it naturally (that’s why animal hearts and other tissues have it). It’s an important contributor to energy production in the mitochondria, and you know how vital those things are.

“A Probiotic That Actually Lasts”

The way the article talks about probiotics is misleading. Not everyone is under the illusion that yogurt, kefir, sauerkraut, and probiotic supplements will confer strains that take up permanent residence in the gut. Finding strains that can stay put, replace missing bacteria (say, from an antibiotics course) and improve health without having to keep re-dosing is certainly a worthy goal—and the Atlantic article you’ve linked explains the progress made on that front—but it’s not the only reason to take probiotics or eat fermented foods.

Fermented foods are great, too. I’ve written entire posts extolling the virtues and benefits of yogurt, sauerkraut, cheese, and other fermented foods.

The short of it? Just because they may not take up permanent residence, getting your probiotics through supplementation and eating fermented foods is still a worthwhile endeavor.

Dear Mark: What Are the Differences Between Vitamin K2 MK-4 ...