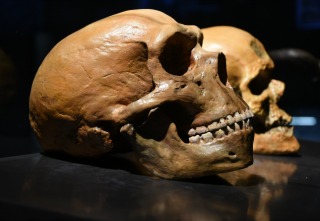 For today’s edition of Dear Mark, I’m answering two questions from readers. The first one concerns a study I linked to in this week’s Weekend Link Love. It appears to suggest that ancient humans had worse genes than modern humans have, that they were at greater risk for many different disorders and diseases. How can this be? Last but not least, Pierre expresses skepticism at the notion of fasting or starvation causing metabolic slowdowns. I agree, but only to a point, and I explain why.

Mark, what’s your take on the ancient human gene study you mentioned in weekend link love today? This one: https://digitalcommons.wayne.edu/humbiol_preprints/115/

I found it really interesting.

The paper has a lot going on.

First, we find that the genetic disease load has not been increasing in modern humans. Many have proposed the opposite: That the rise of modern medicine and technology has relaxed the selective pressures of everyday living and allowed genetically “unfit” people to survive and reproduce, thereby increasing the rate of deleterious mutations. This paper seems to contradict that.

We find that the genetic load in certain disease categories was higher in ancient humans. Looking at individual samples, we find that the Altai Neaderthal and Otzk the Iceman had some issues. The Neanderthal had a higher genetic risk for neurological disease, immune issues, cancers, gut disorders, and metabolic disorders. The Iceman had a higher genetic risk for cardiovascular, immune, gut, and metabolic disorders.

There are several ways to interpret the results. The most common interpretation will probably be that the genetic disease load was greater in ancient humans because they weren’t living long enough for the diseases to take root and impact reproductive fitness. I think that’s part of it, but my take is different.

Maybe ancient humans carry more genes that in modern environments increase risk of diseases, but in ancestral environments were neutral or even increased fitness. Heart disease wasn’t an issue because he wasn’t chowing down on packaged cupcakes, Panda Express, and Pepsi.

If you transported Otzi the Iceman or the Altai Neanderthal to the present day, set them up with an apartment on the Las Vegas Strip with neon signs blaring into their room at all hours of the night and ensured they spent their days hanging out at the slots and pigging out on the buffets, they’d be fat, diabetic, and feeble more quickly than most modern humans in the same position.

This is why traditional people get hit so hard by modernity. It’s perhaps why the Pacific Island nations are among the fattest in the world. It’s why native peoples all over the world, when influenced by industrial food cultures and modern sedentary lifestyles, tend to be fatter and sicker than the broader population of their countries, whether it’s Canada, the US, or Australia.

Consider the genetic predisposition to alcoholism. It’s far higher in American Indians than Americans of European descent due to a lack of protective genetic factors and higher incidence of deleterious genetic factors (and, of course, environmental factors). If you dug up some American Indian graves from the 1400s and ran DNA tests on the remains, they’d show up as having a high risk of alcohol dependence. But back then, when they weren’t exposed to alcohol, those “deleterious” genes weren’t actually deleterious.

What’s really fun to think about is if these “deleterious” genetic variants offered protective or beneficial effects in other areas. What do you think?

Not sure about the statement that metabolism slows down when you are starving. That doesn’t really square with my fasting results and it doesn’t make sense from an evolutionary standpoint. Seems that slowing down when you need to chase down some food would lead to your extinction.

I agree with your thinking. Fasting as most people practice it does not slow the metabolic rate. It takes at least 3 days of pure fasting for minor slowdowns to the metabolic rate to occur. Some studies even find that short-term fasting (48 hours) boosts metabolic rate by almost 4%. Others find similar results. This jibes with your results and hypothesis—”slowing down when you need to chase down some food would lead to your extinction.” It seems you’ve got about 3 days of full (or even extra) energy to acquire food before energy starts dropping. That should be plenty.

At some point, though, things break down. It doesn’t make sense from an evolutionary standpoint for humans to die when a European cave bear eats their face, since that leads to the human’s extinction, but die they do. There’s only so much the body can handle. Evolution can’t contend with a giant bear mouth chomping down on your head, nor can it contend well with a lack of food for six days straight. You just run out of juice.

That’s it for today, folks. Thanks for reading. Take care, and be sure to add your own comments, questions, and answers down below!