Grok’s Favorite Things: 14 Gifts For Yourself (or Other Primal Types in Your Life) 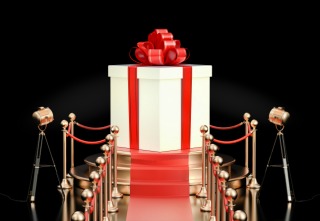 Grok may not have an entire cable network or billions of dollars in net worth, but I’d suggest he’s at least as good as Oprah at picking good gifts. This is his gift list for 2017. For a dude whose idea of high technology was an atlatl, it’s an impressive one.

If you’re shopping for the Primal types in your life, or maybe you want to treat yourself to something not just nice but useful, use this gift guide for ideas.

I’ve been banging the cold plunge drum for years now, but the fact remains that most people don’t have an easy way to fully immerse themselves in cold water. Showers aren’t plunges. Bathtubs don’t offer full immersion, and the warm water always beckons. $120 gets you this 70-gallon stock tank, which is large enough to accommodate most full-grown adults interested in immersing themselves in cold water.

The stick blender is a great idea, but most of the time people skimp on the price and end up with a substandard, underpowered piece of junk. If you want one that lasts, one that can probably blend a smartphone, it’s worth forking over a little more money.

As of the writing of this post, this blender is about $30 off its price.

Get one or two if you care at all about wood fire or charcoal cooking.

This game won’t exactly replace The Origin of Species. It’s not a substitute for learning about natural selection. But it’s a great time for the family, suitable for most ages, and is at least moderately related to evolution. I’m always asking you folks to play more, and not just physically. This is a good way to do it.

Though it’s wintertime and most of us aren’t really thinking about donning sandals, keep these in mind for warmer times. You can do everything in Luna sandals. Hike great distances, run trails, climb mountains, walk in the rain, chill on a beach. Check out their Instagram account for a broad sample of what people get up to in their sandals. An old friend of mine, Barefoot Ted, makes these in Seattle, so you’ll be supporting an American business (if you care about that sort of thing; I do) and supporting a friend of the blog. Also, the guy is named Barefoot Ted, so he definitely understands the detailed workings and requirements of the human foot.

I’ve always been skeptical of wearable technology. It’s not very accurate, it overstates its abilities, and it engenders over-reliance on the tech and ignorance of our own intuitive powers. But if the initial studies bear out, and it appears they will, the OURA ring looks to be an unobtrusive and accurate wearable for measuring sleep, heart rate variability, and body temperature.

If you don’t have the space for Dr. Eades’ Sous Vide Supreme Touch+, the Anova is the next best option. It’s an immersion sous vide, meaning you dunk it in the vessel of your choice and it regulates the temperature of the water.

For the Primal foodie in your life (or your own Primal kitchen)… I think Grok would be proud of his likeness engraved on the cutting board and chef’s knife, not to mention our Mayo, Extra-Virgin Avocado Oil, and Balsamic Dressing. I’ve gifted a number of these already this season.

I rarely wear socks, but when I do, I enjoy the Darn Toughs. Wool keeps you warm in the cold and comfortable in the warmth. Socks usually give me “hot foot.” The Darn Toughs are some of the only ones that don’t.

Lately, I’ve been really curious about Lion’s Mane mushrooms, which studies show have the potential to stimulate neurogenesis—the growth of new brain cells. This product is a great way to get both coffee and lion’s mane (plus chaga, another beneficial mushroom). The alternative is buying and cooking fresh lion’s mane, which is delicious but runs rather expensive for everyday use.

We carry these in the Primal Blueprint store for a very good reason: They work with your body’s natural ecosystem to keep you clean. If your giftee has hair, go for the shampoo. If they don’t, go for the cleanser. And everyone could use the AOBiome spray, which preferentially targets ammonia-producing bacteria and reduces the need to shower and use soap.

There’s nothing more satisfying than using a really sharp knife to slice meat and chop veggies. There’s nothing more dangerous than using a dull knife to slice meat and chop veggies. Purists would have you invest your time and money in buying and learning to use a sharpening stone, and that’s a valid option, but most people won’t dedicate enough of themselves to really learn the craft. This knife sharpener gets top marks.

It’s designed to kill weeds, and that’s all well and good. I like it to start charcoal fires. Rather than light your coals in a chimney, pour them out, and hope for the best placement, you can set your coals up in the perfect arrangement and then light them with the torch. Other benefits include finishing off dishes with a blast of flame. Oh, and if you use this at night, it just looks awesome.

For outdoor use only.

That’s it: Grok’s gift guide for 2017. Now I’d love to hear from you…. What are you getting people? What are you lusting after? What’s been the best purchase you’ve made or received in recent memory?