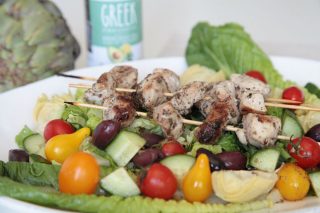 It’s not only the zesty, herbal flavor that’s amazing. PRIMAL KITCHEN™ Greek Vinaigrette is also amazing because it’s packed with healthy and nutrient-boosting avocado oil and high-ORAC oil of oregano.

It’s shocking how many jars of bottled salad dressings are filled with ingredients that can cause weight gain, spiked blood sugar and high triglycerides. But not PRIMAL KITCHEN™ salad dressings. The Greek Vinaigrette is super-healthy and has a savory blend of Greek flavors (vinegar, oregano, coriander, marjoram, lemon) that can be used to both dress salad and marinate meat and seafood.

Time in the Kitchen: 45 minutes 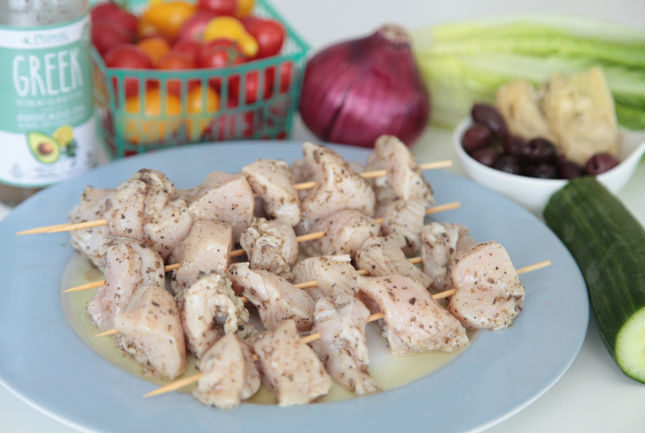 Toss the raw chicken with the Primal Kitchen Greek Vinaigrette. Let marinate 30 minutes, or up to 4 hours.

While the chicken is marinating, assemble the rest of the salad. In a large bowl or on a platter, layer the romaine lettuce, artichoke hearts, cherry tomatoes, cucumber, kalamata olives and red onion. Set aside in the refrigerator.

Thread the marinated chicken onto skewers. Heat the grill to medium-high and oil grate. Grill, turning occasionally, until cooked through, 10 – 14 minutes.

Toss the salad with desired amount of PRIMAL KITCHEN™ Greek Vinaigrette. Slide the chicken off the skewers and toss with the salad. (The chicken can be served warm or cold.) 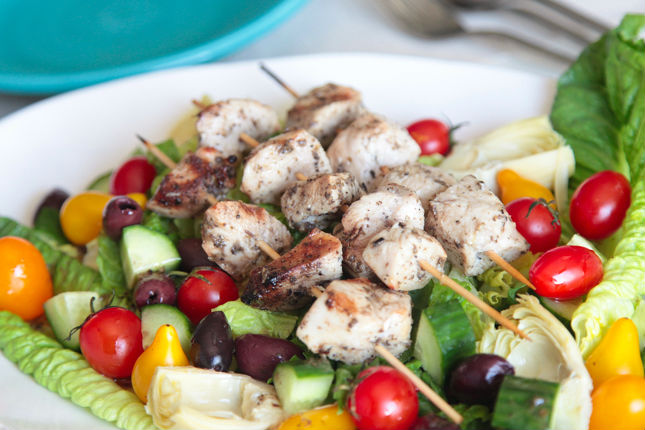