Before I get into my success story, I just wanted to thank you for all that you do!! You’ve been an incredible resource and inspiration for me as I’ve gone through this Primal adventure. I look forward to checking your blog and knowing that I will be given quality information backed by sources I can read through as well. I absolutely love it!

Now a tiny bit of background: my name is Angela Smith, I’m 25 and live in the great city of Minneapolis, MN. I grew up in Fargo, ND – not the greatest place to grow up considering the winters are long and harsh. My parents were both meat-and-potatoes type of people, so I grew up on a fairly decent diet of meats, saturated fats, and minimally processed carbs. That is, until my preteen years. As a fairly active child, the winters were long and boring. I turned to the comfort of sweets, baked goods, movies, and books. Once I was hooked on sugar, I began emotionally eating as well. As my addiction progressed, the turmoil intensified and I became depressed. I soon began to battle anorexia and bulimia, though I would never admit it at the time. When I binged, it was sleeves of cookies, bags of chips; needless to say I was unhappy and feeding my unhappiness. I dropped to a startling 135 at 5’8,” and was concerned I was still too large; all the while people became concerned I was too thin. By then my hunger had all but waned and I didn’t binge as frequently.

In about a year’s time, I was peer pressured into joining track; I was very thankful. I began running with the distance team and running made me happy. Immediately, I remembered the active child from years back and began eating to run. An elective in high school regarding sports nutrition piqued my interest in knowing what to put in my body and I began researching. I read and read and read about eating clean -minimizing bad fats, eating good fats, minimizing the simple sugars and eating more whole grains – it all resonated with me except for their hatred of saturated fats. I couldn’t part with my milk and would never part with butter. It didn’t make sense to me that butter could be bad!

Shortly after discovering the bliss of running, I tore my ACL and a cycle of injuries began. It had been a clean tear and it was an easy reconstruction and recovery. I was given the green light after physical therapy to begin running but sustained stress fractures in the opposite tibia and fibula. Following the recovery of those fractures, I began experiencing shooting and debilitating back pain that would cut my running short. Exams showed degeneration in my lumbar spine and a bulging disc at S1/L5. I was 16 and didn’t know what any of that meant. There was no rehabilitation offered, no physical therapy offered. Any strenuous activity would leave me locked up for a week, prone to back spasms that put me on the floor afraid to move. I had long been a patient of chiropractic for neck pain and headaches, but was given the unsatisfactory prognosis that I may be one of those people that just aren’t made for running.

I found a new doctor and she helped eliminate my back spasms; I could work out again but running still gave me pain in my hips. I began dabbling in barefoot movement after reading Born to Run by Christopher McDougall. I took barefoot walking slow, but as I got stronger, I noticed I had less pain in my lower back and could go longer in between my chiropractic visits.

Shortly after I was married, I ruptured that bulging disc and was in horrific pain. The best that I can remember, I ruptured that disc shortly after being introduced to your blog. My husband and I decided to try The Primal Blueprint for 30 days. We planned to have one cheat day a week but the rest of the week we were strict with ourselves. I was astounded by how quickly I noticed the difference. I didn’t notice it on the days I ate well as much as I noticed it on my cheat days. Within a half hour of eating my cheat meal, I’d become sick to my stomach, sometimes my heart would begin racing, and every part of my body that had been injured became tight and sore. It hit me like a ton of bricks that this was something I needed to understand. I poured my time into your blog and began to understand what was happening and how I could eliminate my chronic pain. As I continued with the challenge, I’d feed the sugar cravings with berries and the cravings lessened over time.

I was real with myself when I read through your blog. I knew that I could only change a little at a time, but I was excited for the changes. It was difficult to let go of some of the conventional wisdom, mostly the habitual aspect of food. I still ate three meals a day whether I thought I needed the energy or not. I didn’t see any weight loss, but the dwindling of inflammation and pain was thrilling. There were still bad days but I began to see how easy it was to influence my day with my food, I began to feel the energy associated with feeding my body correctly. I gave myself considerable leniency and continued drinking, continued dairy, but focused on exploring vegetables, meats, and fats. I was sedentary, at a desk job, but I began exercising again with considerably less pain.

Then my husband and I moved to Minneapolis. It was the change that was needed to shake up my habits. When we moved, I was a squishy 180 lbs – it was the largest I had ever been but it was the happiest I had ever been. I understood exactly how I could lose that fat; I was armed with knowledge. My part time jobs in the city were both within walking distance and I began experimenting with intermittent fasting since I already vehemently hated breakfast. The walk to my morning job was only 20 minutes. I drank coffee with heavy cream for breakfast and was on my feet until lunch, when I’d take another 20 minute walk home. Most of the time I was not hungry, but knew I needed to eat then because my other job went late into the evening and didn’t provide an opportunity to eat. I had a few hours between jobs and only exercised when I felt like it; sprints on a stationary bike or elliptical machine, and lifting weights. If I worked out, I was fasted and pushed lunch as late as I could. The walk to my second job was 30 minutes, where I sat for about five hours. Minneapolis has a fantastic bike rental company; sometimes I’d walk to that job but sometimes I’d ride. 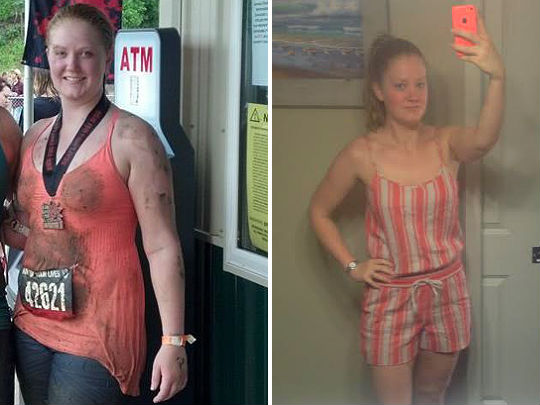 I wish I could say that I wasn’t really shocked when the fat began to melt away, effortlessly. But I was astounded. I wasn’t really doing anything difficult. It was all so easy and it was all habitual too – I’m now a slim 160 and lift weights quite regularly. I’d say that the hardest part about it is the varied reactions you receive when you explain it to people. Some argue and push it away; some don’t want to take the time to educate themselves to understand. But now the information is all second nature to me and most conventional wisdom is all but forgotten. A coworker recently told me she was starving and I was startled and asked “Why?!” Silly question right? She gave me the funniest look and said, “Um, it’s lunch time.” I didn’t know how to tell her that I had forgotten what it was like to be addicted and dependent on sugar. But it’s moments like those that I am incredibly thankful for you. Keep the information coming, I’m always looking for ways to make changes and improve.