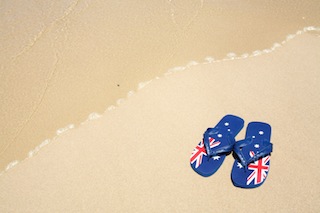 Something beautiful is happening across the Pacific Ocean. For years, I’ve sensed a strange Primal energy coming off the waves that pound the Malibu coastline, carried across the water from a distant nation whose people have embraced ancestral health and fitness more vociferously than any other. The citizens of this country read my blog, attend PrimalCons, and take the PB Expert Certification course in disproportionate numbers relative to their population. A revolutionary chain of Primal cafes – THR1VE – has sprung up around the major cities, offering breakfast and lunch bowls, healthy smoothies and coffee blends, and to-go fare whose ingredients you don’t have to second guess. The climate ranges from gorgeous coastline to tropical rainforest to expansive desert to Mediterranean mildness, promoting, enabling, and basically shoving nature appreciation down their collective throats. And that universal bellwether of widespread paleo acceptance, the emergence of the CrossFit box, has exploded across the country. Australians may be thousands of miles away, but they feel pretty close to me.

Why, though? What makes Australia such a hotbed for the Primal lifestyle? Several national characteristics converge to explain its unique and special relationship with ancestral health.

Australia is a young nation that hasn’t had much time to develop a single overarching national food culture or cuisine (insert “shrimp on barbie” joke here). Unfortunate? No. That’s what makes Australia so amenable to the Primal way of eating. It’s a nation of immigrants, beginning from the indigenous explorers 50,000 years ago and European settlers two centuries ago to the ongoing waves of Brits, Kiwis, Chinese, Indians, Sri Lankans, Vietnamese, Turks, Papua New Guineans, Italians, and every other ethnicity that makes its way over. As a result, Australian food culture is a mashup of cultural influences representing the various waves of immigration into the country, priming Australians for radical new ideas in food – even something as crazy as eating like your ancestors and ditching grains.

It doesn’t hurt that the local meat and seafood are incredible. Lamb and beef are everywhere, and they’re good and inexpensive and mostly pastured on the grasslands available year round. And seeing as how it’s the largest island in the world, the access to high-quality wild-caught and ocean-farmed seafood is unparalleled. It isn’t hard to stay Primal in Australia. You almost hit it by default.

Despite the size of the island (approximately 90% of the continental United States), it’s sparsely populated with under 24 million people, 85% of whom live within 30 miles of the coast. Average earnings are higher than most, giving the general population a hefty dose of disposable income. Australian income is more widely distributed with fewer extreme highs and lows than the US, and workers are guaranteed at least 28 paid vacation days each year.

Couple the proximity to beautiful beaches and open outdoor spaces with year-round sunshine, plenty of disposable income, and enough time off to enjoy it and you get a population that loves to play and exercise. Sure enough, the majority of the population, young and old alike, participates in “sport and physical recreation.” Heck, almost 50% of the seniors in Australia are regularly playing sports, hiking, swimming, and enjoying the great outdoors. And in Olympic sports, Australia consistently ranks well above its per capita position. They absolutely kill it in swimming.

Also, there’s just something special about the mindset of the Australian athlete. For decades, they’ve dominated the sport of triathlon. And throughout all my years, I’ve never met an uptight one. Intense? Yes. Competitive? Absolutely. But never obsessive compulsive or nursing a fragile psyche like so many of the elite athletes from the US or other developed nations I faced. Instead, they embodied this compelling blend of “no worries, mate” surfer-dude relaxedness, competitive intensity, and strong work ethic that made them tough to beat. They didn’t like losing, but losing didn’t ruin their day like it did, well, mine.

So, while Australians have always embraced physical culture and share an intense interest in diet and lifestyle interventions that improve how they look, feel, and perform, they also recognize the importance of taking it easy and enjoying life. When a leisurely day at the beach always awaits, it’s tough to lapse into chronic exercise patterns.

The Primal/paleo movement has its roots in the United States. In some countries, that makes it a hard sell. Not to Australians, who’ve always had a strong cultural affinity with America bordering on love affair. They’ve long turned to the US for innovation in technology, media, fashion, and music, so acceptance of American ideas about diet and health and fitness are a natural extension of that. Even during the last decade when Aussie public sentiment was against sending troops to war, the popular support for the political and cultural alliance between our countries never wavered.

Healthwise, Australia is better off than the United States. Life expectancy is in the global top ten. Physical culture remains strong and continues to grow. On the other hand, the progressive increase in processed food consumption, added sugars, and industrial seed and vegetable oils, is leading Australia down a similar path to the US with a somewhat “barbell’ distribution when it comes to health and wellness. Obesity is rising faster in Australia than any other country, and diabetes is the fastest rising chronic disease.

Australia’s universal single payer health care system, a sort of Medicare for all, wields considerable power and offers distinct advantages of scale when dealing with problems of this magnitude, but the collective still has to pay for individual bad choices. And with rising rates of diabetes, obesity, and other chronic conditions that increase health care spending, individuals appear to be making a lot more bad choices. Australians will soon have to shoulder a much larger load than they’re accustomed to paying unless something changes. 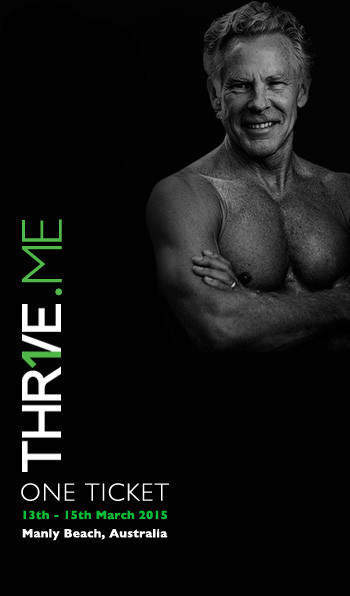 Well, something’s changing. As I’ve just laid out, the ancestral health movement is going full-bore in Australia. And next March 13-15, 2015, the team at THR1VE will be putting on an ancestral health event rivaled only by PrimalCon itself: the THR1VE.me Symposium. I met Josh Sparks, the founder of THR1VE, at PrimalCon Tulum last March. We hit it off, and apparently the whole shebang really rubbed off on him because he said the energy and vitality and community he felt in Tulum inspired him to bring the same thing to Australia. I’d say he’s on the right track. It’s going to be a blast and it will cement the strength of the movement in that part of the world.

What are you waiting for? Buy your tickets. If you’re anywhere near Australia or New Zealand and you’re reading this blog, you need to be at THR1VE.me. And if you live a bit farther away, that’s fine. You get to be the one with the funny accent that everyone is dying to meet.

And as an extra bonus, if you sign up for the symposium, I’ve also thrown in a discount code for the Primal Blueprint Expert Certification.

Australia is ripe for transformative, disruptive health movements that make sense and actually work. This is one, and it’s just the start of it. I’ll see you guys there.

Thanks for reading, everyone. If I’ve got any Aussie or New Zealand readers (I know I do), let’s hear about it in the comments! Are you going to make it to the THR1VE Symposium?