From Insanity and Injury to Victory and Health

I always wanted to be an athlete when I was younger. I was an overweight teenager who admired the athletes. I had been a victim of yo-yo dieting and over-exercising (usually running) my whole life. One day—sick of the run/diet/lose weight, stop running/gain weight routine—I decided to pick up running again. But this time I immediately enrolled in a marathon thinking that it would keep me motivated. It did! After my first marathon I was hooked. I became the skinny athlete that I had so longed to be and qualified for the Boston Marathon way too quickly (it was only 10 months after my first marathon and only my 3rd marathon ever). I say “too quickly” because I spent four years of my life proving to myself that the first time was not a fluke.

They say insanity is doing the same thing over and over again expecting a different result. I spent a long five years in the insane asylum. I used to have to take three iron pills a day to battle my anemia from my lack of consumption of red meat in favor of carbohydrates. I had such bad chronic pain in my psoas that I had to go to physical therapy once a week to get a psoas release to keep it at bay. At this time, before I found a decent physical therapist, I was plagued by doctors who had no idea what was wrong. An “expert” at a renowned orthopedic hospital in New York City told me I needed expensive PRP therapy. All of this for what? To earn a Boston jacket that I could flaunt at the grocery store or the next running Expo?

To add to the insanity, I even started dabbling in duathlon (I discovered biking as a way to cross-train while I was dealing with my psoas issues) and had thoughts of completing an Ironman. I spent over 15 hours a week at swimming lessons, biking, running, and strength training and countless hours preparing for it all. Again, I became too good, too quickly. I qualified for Team USA to compete at the World Championships. All of this fed my ego and created an even more self-absorbed person than I already was. Training was always so mentally and physically draining for me. Something was always hurting (c’mon, the rest of you who have yet to go Primal won’t admit it, but something always hurts). I was constantly searching for the next race, creating the next training schedule, researching my competition, and researching the best way to eat and carbohydrate load. It was in the over carbohydrate loading process that I made my first healthy decision in a long time.

You see, I was running the Philadelphia Marathon and I had to stop and DNF (did not finish) half way through. Something was terribly wrong. My legs were throbbing and I couldn’t run one more step. I didn’t go out too quickly and I was running at the pace that I was more than accustomed to running. Looking at my stats later (through Garmin Connect) I noticed my heart rate was pushing 180 (even during my warm-up) when that wasn’t even my 5k heart rate! After a lot of research I came to the conclusion that I had some sort of metabolic breakdown from the extreme carbohydrate loading at over 350 grams in my 107 pound body.

That is when I found Dr. Axe and learned how to eat like my health depended on it. I switched to a Primal [Blueprint] diet (I didn’t realize it at the time) and within three months I blasted my former marathon PR (personal record) and qualified for Boston by 14 minutes. I didn’t get that much better in such a short period of time—it was as simple as changing my diet. I finally realized my dream of qualifying for Boston for the second time in March of 2013 after 18 marathons in five grueling years.

While training for duathlon, I realized that some of my struggle with swimming was my lack of core and back strength. Sorry, runners, you may think running builds your core and overall strength, but it doesn’t. I was weak as hell. So, I joined CrossFit and focused less on running. That had its toll on me as well. It is very hard to go to a CrossFit gym and not over-train. It is designed (although not required) to be competitive, like posting your times on the board and discussing how much you were able to lift. Please understand, I am grateful for the year that I spent there and what it taught me. CrossFit is by nature pretty Primal, but our caveman Grok didn’t post how long it took him to move those rocks or walk to his neighbor’s cave.

My physical therapist believes in the CrossFit philosophies, but warned me of the high risk of acute injury. I poo-poohed him until… I got hurt. I was coming off the rope too quickly so my “team” could post the best time. I jumped off and landed on the rope on the floor and twisted my ankle badly. I was training for the Chicago Marathon at the time (I time-qualified) and refused to listen to the pain. I gave my ankle a “whole three days’ rest” and went out for a run because, by golly, I should be better by now! So, I wrapped my ankle and off I went. Limping, but already two miles into the run, I pulled a Forrest Gump. I just stopped, paused for a millisecond at the thought of what I was about to do and walked back, deciding that the insanity had to stop.

Those were my first Primal steps. What a scary moment that was! After 5 long years, 2,096 activities covering a distance of 14,357.38 miles with a total time of 2,084:27:42 hours, burning up 923,460 calories and 382,710 feet of elevation (Garmin was great for number hungry people like most runners), I was going to end it right there. Stopping a mere 76,540 calories short of a million, I wasn’t even going to run Boston, what this was all about in the first place. I knew that I needed to be active, but I just didn’t know how without tearing myself down. In comes Mark Sisson and The Primal Blueprint. I never looked back.

I am not mentally completely Primal, yet. I have good and bad days. Yes, I am happy with the self-esteem that CrossFit and running gave me, but I sometimes long for the competition and posting my new “age group” medal on the wall. However, I do realize that I am so much healthier inside and out now. My biggest obstacle is the adjustment of looking at a body that is not skinny, but muscular and healthy. I never left for a run without toilet paper in pocket because more often than not I had to ditch into the woods for a potty stop. I now go to the bathroom where I am supposed to! (Poor Grok would not have had this luxury.) For the first time, I feel like nutrition is actually being absorbed in my body and not left in the woods!

I now have a makeshift CrossFit gym in my garage where I exercise, to quote Jay from Mark’s Daily Apple on December 26th, like “I’m slowly letting go of the need to push hard every single time to experience my workouts as joyful expressions of movement, rather than as rungs on a ladder to the next personal record.” I now jog when I feel like it without my Garmin attached to my wrist. (Do you know how long it took me to go out for a jog without going to push a button on my wrist?) I sprint, climb rope, jump on boxes, do pushups, pull ups and walk. How wonderful walking is! Whoda thunkit? Now my biggest worry is carotenosis and explaining to everyone why my hands are orange. I now have energy to clean and do yard work whereas I used to have people that I paid to do that. I had little time or mental ability to concentrate on the things that really matter, like my family or my teaching.

Thank you, Grok. Thank you, Mark Sisson. Eat, sleep and live like a caveman! 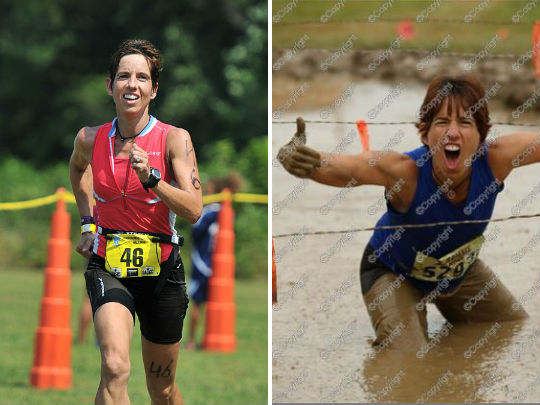 My Primal journey wound up differently that most–with a 20 pound weight gain. My first photo is me, during a half iron duathlon, at 107 pounds. My last race, a zombie run with my son, was 20 pounds later, with more primal fat and muscle than before.