From Float Tanks to Silent Retreats: Why Are People Looking for More Extreme Forms of Sensory Deprivation? 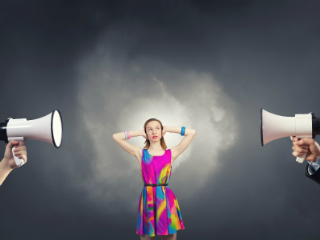 I’m thinking about a Philip K. Dick story, never published, perhaps never put down on paper or even imagined. In this story, which might only exist in my mind, the world is awash in sensory stimuli. Bright lights, flashing signs, an endless cacophony. A world of quick jump cuts. It’s like the Khaosan Road at 11 PM, standing on a Los Angeles overpass at rush hour, or living inside a Youtube video. Imagine your first night in the Amazon, only instead of insects and birds and other creatures, it’s horns and conversations and alarms and drunks and car doors and rattling manhole covers and ringtones. In the world of this story, silence is a premium. To escape from your senses, you need to pay up.

$1000 gets you three days in a retreat center staffed by robed monks who prepare vegetarian meals and confiscate your smartphone and other noisemakers. No one talks, no one demands answers. The floor and walls are padded, limiting the noisy reverberations of human locomotion.

$100 gets you an hour in an isolation tank filled with lukewarm saltwater attuned to your body temperature. For that single hour, you won’t hear, see, or feel anything. When the hour’s up, you return to the sensory soup.

At work, “mindfulness experts” lead mandatory classes training you to be at peace in your head and company memos urge you to utilize the “quiet room” at least twice a week.

Sounds a little crazy, right? Like something out of a dystopian novel?

And everywhere you look, people are trying to get away from it all. Sensory deprivation, or “float” tanks, are springing up all over the world. Meditation retreats are exploding, and pretty much everyone has a meditation app on their phone (even if they don’t use it much). Google searches for terms like “float tank,” “silent retreat,” “mindfulness,” and “sensory deprivation” have been trending upward for the last few years. Silence is in.

One reason is Joe Rogan. For many years, he’s championed the use of float tanks to counterbalance the sensory onslaught of normal life. To eliminate the exogenous chatter and be alone with your own head to confront the self-talk we all engage in—and hopefully come to terms with your problems.

Another reason is the drive for productivity. In the tech community, mindfulness retreats, meditation rooms, and float tanks are productivity tools. They don’t care so much about enlightenment, or knowing oneself as they do the increase in productivity and focus silent mindfulness retreats promise. That you might improve your ability to be a functional human being is a nice side effect.

Although my description of the dystopian Dick-esque world is exaggerated, it’s not that far off from reality.

People need an outlet. They don’t have much time to be alone with their thoughts. They don’t know what to do with themselves when they are finally alone in a quiet place. You get that little glimmer of boredom, or self-talk, or “what the hell do I do now?” and must choose. Do you shy away from the quiet and check your email? Or do you embrace it, revel in it, plumb the depths?

Above all, the growing trend of float tanks and zen retreats and meditation apps and completely booked camping reservations and everything else indicates that we know, at least implicitly, that we need to get away from the noise. We don’t really know how to do it without help and we may not even be fully aware of the problem, but we know that something isn’t working.

What are people avoiding? What’s all the noise doing to us?

It’s a cardiovascular disease risk factor. Noise has emerged as a legit risk factor for heart attacks. Some research even finds that it directly worsens endothelial function

It’s annoying. Life doesn’t sleep. Planes are always taking off and landing. Traffic is getting worse and worse. Horns are honking, alarms are going off. “Annoying” sounds trivial but it’s a real detriment to one’s quality of life. Imagine living in a constant state of annoyance. Awful, just terrible. Plus, annoyance mediates the relationship between traffic noise and heart disease; if it’s annoying you, it’s probably bad for you.

It reduces sleep quality. The closer you are to an airport, the worse you sleep. Loud noises during the day may affect our sleep at night. Even if we can’t consciously hear it (as during sleep), the cochlea in our ears are affected by the soundwaves. Quiet time reduces stress in nurses, Quiet time in the hospital improves outcomes and sleep in ICU patients.

Although epidemiology is mixed, experimental evidence shows that individuals exposed to loud noises have increased levels of stress hormones in their saliva, urine, and plasma. This may indicate a difference between acute noise and chronic noise; at least in fish, repeated exposure to a loud noise increases tolerance.

In a more recent study, exposing workers to low-level “office noise” increased the perceived exertion required to complete a task. Older studies have found that office noise decreases the number of attempts a worker is willing to give to complete a task or solve a problem. Chronic industrial noise exposure is even worse, increasing fatigue, cortisol, and post-work irritability. In anesthesiologists, intraoperational noise (sounds playing in the midst of an operation) increases the perceived difficulty of a procedure.

Many of the benefits of silent retreats, float tanks, and other interventions stem from removal of the stimulus causing these health effects. If your world is quieter, you’ll sleep better, have a lower risk of heart disease, improve your productivity, feel less stressed, and less annoyed. These are all pretty basic, and I think they probably form the majority of the measurable effects. Industrial, office, and traffic noises are evolutionarily novel. Our genes “expect” a more silent world, so avoiding noise pollution and instilling periods of quiet is simply restoring what was lost.

In one study, a music researcher was looking at the effects of different types of music on physiological markers in healthy people. He found typical results that you’d expect. Techno and rap getting people amped up, Indian sitar and classical chilling them out. But the most striking changes were found where he wasn’t even looking: in between songs. Every time a song changed, there was a 2 minute lull of full silence, during which subjects would show signs of complete relaxation. They were more relaxed during the silent intermissions between songs than during a relaxing song or the big length of silence before the experiment began. What mattered was the contrast—the shift from sound to silence.

This is the crucial piece of the issue.

The world is bigger and somehow smaller than ever. The avenues for entertainment and information and communication are unparalleled. It’s an incredible time to be alive. But how often do we really, actually appreciate that fact? It’s only through its absence that we appreciate anything. Recall Louis CK’s “everything is amazing” bit. Everything is amazing. Turning everything off helps us realize it. Silence is a break from the madness.

Just as we must rest to get the benefits of strength training, we need silence to enjoy the noise. Otherwise, it’s a din.

People need an outlet. They don’t have much time to be alone with their thoughts. They don’t know what to do with themselves when they are finally alone in a quiet place. I fully support the commodification of silence and sensory deprivation if that’s what it takes to help people stay sane. An hour in the tank is easier to squeeze in than a long hike in the mountains an hour and a half out of town. Silence and sitting meditation is easier to maintain when you’ve dropped 1000 bucks and everyone else is in the same boat. So this post isn’t meant to rail against these trends. I’m more concerned with why they exist and what they’re offering.

What do I do to grab a respite from noise? Well, I’m no good at meditating—I’ve tried, believe me—so I have to cheat at it.

So instead I’ll go hiking whenever I can. I’ll watch the sunset when I remember to. I’ll go paddling and lose myself in the rhythm of the waves. I’m not much for float tanks or silent retreats, but they serve much the same purpose.

Now, I want to hear from you. You get that little glimmer of boredom, or self-talk, or “what the hell do I do now?” and must choose. Do you shy away from the quiet and check your email to escape it? Or do you embrace it, revel in it, plumb the depths?

How do you deal with an overabundance of noise? What’s your outlet?