From Fat and Sick to Fit and Healthy: How Crohn’s Disease Is No Longer Ruining My Life!

It’s been almost two years now since I said goodbye to the symptoms of my Crohn’s Disease.

I sometimes reflect on how I suffered day to day and cannot believe the changes in my life.

I had constant day-to-day diarrhea and suffered from extreme urgency. I could be speaking to you and mid-conversation I would suddenly have to run off. I could be anywhere. I remember that for the two years that my illness was at it’s worst, I barely listened to anyone. When they were talking I was always thinking about where the nearest toilet was.

This happened up to fifteen times a day. Anti-diarrhea medication barely touched it. And once I was on the toilet I was often dragged back a second or third time in quick succession.

This meant I had great difficulty traveling anywhere as I needed to know where the toilet bowls were on my journey. There was no way I could fly. I just didn’t have the luxury of being able to ‘queue for the loo’ once that seat belt sign went off.

I became a bathroom expert. I knew where every toilet was and when they closed. It was an even worse problem at my job since my work dictated I be out of the office. I had to be smart and plan my routes.

I even thought once that I should start a competition for the best-kept bathrooms; we could have an evening gala prize giving event, like The Brownlows, and people could get prizes for the quality of their toilet paper or handwash. I certainly knew them all.

I also suffered from Reflux Disease and without medication, Nexium, a PPI (or Proton Pump Inhibitor), I simply couldn’t function or sleep.

I rattled with medication.

On top of that, I suffered joint pain, especially my knees and neck and shoulders and used to pop painkillers like lollies to get through the day.

When I finally took the dive, driven by my wife, to look into changing my lifestyle, I had hit rock bottom.

I was the heaviest I had ever been, 5’8” with a 40” waist and I looked and felt terrible. Some of this was diet and some was caused by the medication I was taking. I looked old. I looked frumpy. I looked ill. 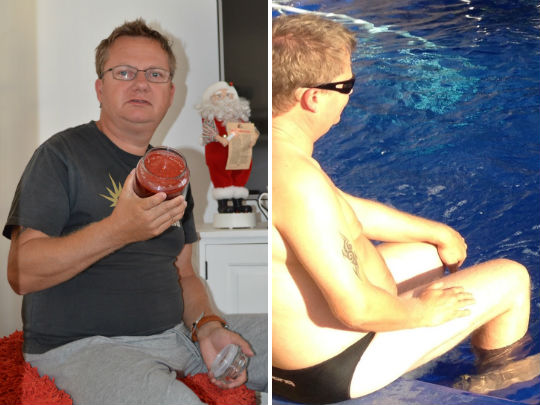 Obviously, being romantic when you feel like this was never on the top of the agenda. I was also always tired, moody and probably clinically depressed. I felt like a social leper and like a millstone around my family’s necks.

I had been told that diet did not affect Crohn’s and with my medication, I could basically eat what I like as it would not change my symptoms. So I did eat what I liked.

I liked fast food. Lots of it. I liked chocolate. Oh and pies and sausage rolls. I also liked alcohol and wasn’t fussy about what I drank. After all, it wouldn’t change my symptoms. It numbed me and allowed me to sleep. Sometimes.

When I finally got on board my Paleo lifestyle I was staggered about just how quickly my poor little body fought back. Cutting out wheat and sugar at first, the weight simply dropped off me. Within two weeks my symptoms just stopped. I started to sleep well and started to feel so much better.

At first, I was still taking all the same meds. I felt well enough to start to exercise and this spurred me on to do more. I lost two trouser sizes very quickly. Then I lost two more. I was always buying new clothes.

I then went hard and did a ten-week detox program and cut out all alcohol, caffeine, wheat, sugar, dairy, legumes and processed food. My wife didn’t think I’d be able to lose the alcohol (neither did I). But I did it. And this ten-week plan saw me lose even more body fat and come off all my medication.

The reflux had simply gone. Diarrhea had gone and the aches and pains had gone. Completely.

My bibles were Nora Gedgaudes’ Primal Body, Primal Mind and Mark Sisson’s The Primal Blueprint. These books have been read back to front and back again several times and they just clicked with me. I loved the whole idea of “Grok.”

I tried to replicate his lifestyle in this modern world we live in and it just all made sense. 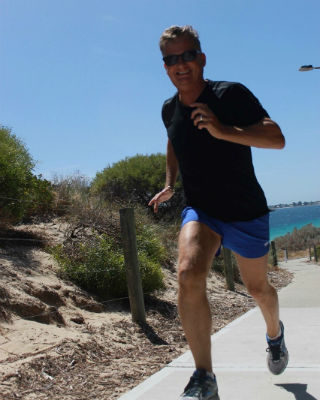 I exercise like a child nowadays, playing tag, swinging on monkey bars and I do high-intensity workouts using just body weight and do occasional sprint sets too, which I love.

I realized that Crohn’s WAS affected massively by diet despite what the so-called experts thought. I realized that PPI’s suppress the body’s ability to make acid to digest food. How wrong was this? We need the acid to be strong enough to digest our food and not cause digestive stress! But for so long I’d just been prescribed a “safe” drug so I could just carry on eating what I liked!

Then I found out the side effects of PPI’s were headaches, nausea, diarrhea, abdominal pain, fatigue, and dizziness! So they were potentially making the Crohn’s symptoms worse! 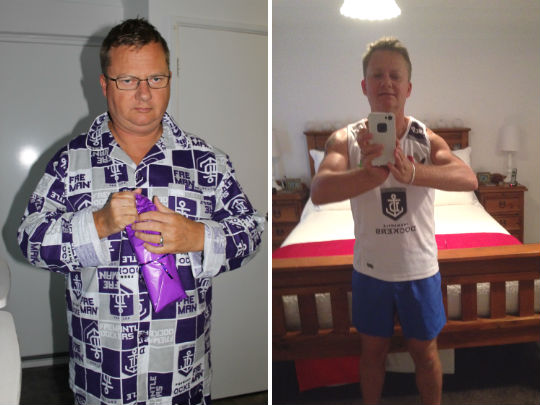 I have boundless energy and sleep really well. 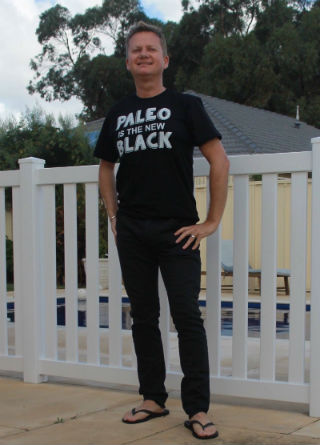 Some people recently pointed out to me that in the photos of me when I was sick (I didn’t like my fat self being photographed, so there aren’t many…), I was always looking sad.

Now I am always smiling. I’m not surprised.

The moral of all this?

Don’t trust everyone. Some shout loud but they might not know what they’re talking about. Research, research, research. Believe in yourself. Live like Grok as much as you can.

And don’t accept that aches and pains and limitations are part of growing old. They are not. We should be fit and well until we die. Food is medicine, medicine is food.

P.S. My wife and I have our own website now, Paleonutter.com and arrange lifestyle seminars and Paleo “nights out” similar to PaleoFX on a smaller scale. This whole thing has been life-changing for us.