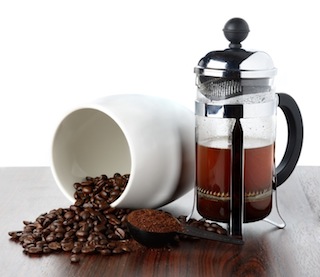 For today’s edition of Dear Mark, I’m answering three questions and sharing a quick, but awesome story from a reader. First, are French press, Turkish, and other unfiltered boiled coffee preparations unhealthy due to the presence of coffee oils in the finished product? They may raise LDL, which gets the conventional health experts hot and bothered, but there are other effects, too. Second, high-oleic sunflower oil was given the go-ahead in a previous post. What’s the story with mid-oleic sunflower oil? Third, with the recent study indicating that peanut/tree nut eaters enjoy improved mortality from all causes, should we take peanuts and most importantly peanut butter off the “no-go” list? And finally, a long term keto success story briefly mentioned in last week’s post writes in.

I have read in the past that the oils in coffee are healthful, and brewing methods that don’t use paper filters are best. But I recently read (on CNN and a few other sites) that coffee oils contain a compound called “cafestol” which apparently is very effective at raising LDL cholesterol. The articles said it was healthier from a cholesterol standpoint to brew using paper filters, rather than using methods like french press (my favourite). Now I’m confused! Since many of us really enjoy coffee, would it be possible for you to shed some light on this? Thanks so much!

I use a French press every morning, so my stance on cafestol — that it’s okay and likely beneficial — might be biased. Either way, I haven’t seen anything in my bloodwork to worry about. If you’re interested in researching the health of effects of French press coffee, search the literature for “boiled coffee.” That phrase refers to Turkish coffee, Greek coffee, French press, and all other methods that don’t use paper filters and thus allow passage of the oil-bound diterpenes (like cafestol) into the cup. I’ll use “boiled coffee” from here on out.

73 mg of purified cafestol a day for six weeks can increase cholesterol by a worrisome 66 mg/dL, but since the average cup of French press coffee contains between 3-6 mg, this isn’t a normal physiological dose. When you look at actual boiled coffee consumption, rather than isolated cafestol, cholesterol levels rise by about 8-10%. Yes, still potentially problematic, particularly if LDL particle number also increases. But except for an older study in middle aged men and women in Norway (where coffee is typically boiled) that found 9 cups of boiled coffee or more per day increased the relative (not absolute) risk of heart disease mortality, concrete links between French press (or other boiled coffee preparation methods) consumption and actual heart disease or heart attacks simply don’t exist.

And one of the ways cafestol affects cholesterol homeostasis is by acting as a natural agonist to the liver’s farnesoid X receptor. What does that mean? Without getting too deep into the biochemistry, other farnesoid X receptor agonists have been shown to reduce atherosclerosis, prevent the uptake of cholesterol by macrophages, and inhibit the formation of atherosclerotic lesions — so cafestol may have an overall beneficial effect on heart health.

Get your LDL particle number checked out to see if you should worry. If your LDL-P is going up dramatically, try switching to paper filtered coffee some of the time. But other than that, cafestol is off the hook. And there’s considerable evidence that it does really good things for us, too.

Liver enzyme levels drop when you consume boiled coffee. And when you inject rats with a known liver toxin, boiled coffee protects them against the expected rise in liver enzymes. Most evidence suggests that coffee, whether boiled or filtered, is protective against liver cancer, liver disease, and mortality from chronic liver disease.

The more boiled coffee a man drinks, the lower his chance of prostate cancer. This inverse relationship was not present for filtered coffee. Cafestol (and a related coffee deterpene, kawheol) may also trigger cell death in certain cancer cells.

Cafestol can increase glutathione activity in the body, which aids in detoxification of aflatoxins (a mold toxin commonly found in coffee beans, so it kinda works out) and may be responsible for its anti-carcinogenicity.

If you’re really worried about cafestol but don’t want to give up the unfiltered coffee, a 2012 study examined the factors that determine the amounts of cafestol that ends up in your cup when making it:

Overall? I wouldn’t give up the French press, but I also wouldn’t ignore any massive spikes in LDL-P. If cafestol is a poison, it’s all in the dose. Two to three cups? I wouldn’t worry and it’s probably helping. But it’s entirely possible that 6 cups of strong French press coffee every day introduce an excessive dose of cafestol, surpassing and reversing the benefits to liver health, antioxidant activity, and cancer resistance.

I can only find mid-oleic cold pressed sunflower oil (verified by the manufacturers) in local stores, i.e. Trader Joe’s and Wal-Mart. I know you said high-oleic sunflower is paleo, but was wondering if mid-oleic could be also.

High-oleic runs around 82% MUFA, which is awesome and makes for a stable, healthy fat, but at about 69%, mid-oleic sunflower oil is still far higher in monounsaturated fats (MUFAs) than regular sunflower oil and thus far more stable. For what it’s worth, avocado oil sports a similar fatty acid profile, coming in at 70% MUFA, albeit with less PUFA and more SFA than the mid-oleic sunflower oil. I’m a big fan of avocado oil (obviously), and I’m okay with the fatty acid profile of this one, too.

There’s not a ton of research on mid-oleic sunflower oil (boy, do I feel like I’m typing that a lot), but what exists is reassuring:

Go for it. I wouldn’t rely on it exclusively, but you could certainly keep some around.

What do you think of the latest study on peanuts and health?

Can I go back to regularly eating peanut butter instead of all the ok-but-just-not-the-same other nut butters? 😉

Thanks for you always informative blog.

First of all, this is an observational study that can’t establish causation. It’s reassuring, but it’s not the final word.

There is some evidence that peanut lectins are atherogenic (peanut lectin is often used in animal studies to reliably initiate atherosclerosis) and can make it through the gut lining into the blood intact. Peanut lectin can induce cancer in colorectal cells, and cancer patients probably shouldn’t regularly consume peanuts because peanut agglutinin promotes metastasis. Peanuts are also typically contaminated with aflatoxins, which can contribute to liver disease.

On the other hand, peanut skins contain polyphenols that are both bioavailable to humans and improve blood lipids. And despite the in vitro colorectal cancer studies, people who eat peanuts have lower rates of colorectal cancer. Then there’s the study you mentioned, although it appears as if tree nuts were lumped in with peanuts.

The biggest problem with peanut butter, as I see it, is how good it tastes. Let’s be honest, folks: real nut butters don’t really compare to peanut butter. Entire tubs of crunchy salted peanut butter disappear in minutes if one isn’t careful.

Moderate amounts of peanut butter in the context of an overall solid diet, lifestyle, and exercise program won’t matter much. If I had to hazard a guess, I’d say a tablespoon of peanut butter each day alongside a Primal lifestyle will reduce optimal health by 0.5%, increase risk of early heart mortality by 0.7% (that’s relative risk, BTW), knock 500 milligrams of eliteness off your weekly capacity, and increase the number of still-crusty-after-a-turn-in-the-dishwasher spoons by 0.8/day.

Kidding aside, I’m still leery of the uniquely-atherosclerotic qualities of peanuts, peanut oil, and peanut lectin, the ability of the lectin to appear in the blood of those who eat peanuts, the aflatoxin contamination concerns, and the addictiveness of peanut butter. A handful of peanuts or a spoonful of peanut butter every once in a while is probably fine, but don’t go crazy. If peanut butter is a “trigger” food for you that initiates massive binges, lay off it.

I’ve never written you, or shared my success story, even though your website has been instrumental in changing my life for the better. Today, you wrote an article on long-term ketogenic diets, and shared a link to the case study that Dr. El-Mallakh wrote about me a few years back (I am one of the women for whom a ketogenic diet has relieved symptoms of bipolar). Since the case study was published, I have had two healthy babies, breastfed the first for 14-months and am currently breastfeeding the second – something I never would have thought possible before the keto diet eliminated my symptoms of bipolar. I was out of ketosis during my pregnancies (mostly primal), but returned to ketosis about 8 weeks post-partum. My babies have thrived on my milk (after I had the blessing of my pediatrician), which seems unaffected by my diet. Anyway, I felt (anonymously) famous today that my case study made it all the way to your blog, and I sincerely appreciate you sharing.

I hope that this dietary intervention gains recognition in the medical community and that others benefit as much as I have.

Hallie, that’s awesome! Thanks so much for writing in. I’m glad to hear you and your kids have thrived.

If I may ask, have you weaned your kids at all yet? If so, what kind of food are they eating? Just out of curiosity.

That’s it for today, everyone. Thanks for reading and be sure to leave a comment if you have anything to add!