Dear Mark: Foods for a One-Year-Old, Vegan to Primal, and Low-Carb Failing Fibromyalgia 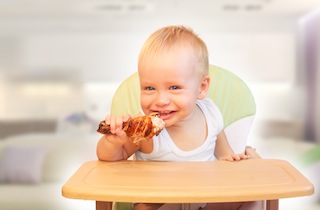 For today’s edition of Dear Mark, I’m answering three reader questions. The first comes from Chris, who’s a little worried his one-year-old isn’t eating a wide enough variety of foods. As it turns out, he doesn’t need to worry, though I do offer a few suggestions for foods to include or offer. Next, how should Verria, a long-time vegan, transition to Primal? Is there anything to watch out for? What physiological and psychological issues will Anita have to face and overcome? And finally, what tips do I have for a fibromyalgia patient whose condition hasn’t improved on a strict very low-carb, high-fat diet?

I just want to thank you for the plethora of free knowledge that you make available on your website.

I have a 12 month old and his diet mainly consists of avocado, sweet potato, eggs (mostly pasture raised from local farms, but in the winter I buy some store bought because chickens don’t lay nearly as much in the cold IL winter) banana and berries. He also drinks coconut water, raw milk from a local farm, some formula and takes a cod liver oil supplement from green pastures. He strays from these main foods occasionally, but they make up the majority of his calories. Is this enough variety for him? How hard should I try to get him to eat a wider variety of foods?

I try to keep broth on hand because of its many benefits, is broth from conventional supermarket chickens and turkeys still good to consume, or should it be avoided?

Thanks again and Grok on,

A 12 month old “needs” about 1000 calories each day. The needs vary on the particular child, of course, and it’ll change from day to day. My kids sometimes seemed to eat nothing at all for an entire day without any ill effect. The key is learning how not to freak out and just let them lead the way. But I digress. Back to your kid.

I plugged 1000 calories of those foods into Cronometer to gauge his nutrient intake, guessing on the amounts and proportions.

A medium banana, a medium sweet potato, two cups of whole milk, a small avocado, a teaspoon of cod liver oil, a cup of blueberries, two eggs, half cup of coconut water. That’s a hair over 1000 calories and gives him a lot of vitamins and minerals. Far more variety than his peers eating rice puffs and carrot sticks and mac ‘n’ cheese, even though the average pediatrician would probably wonder where the hearthealthywholegrains are.

I have a few suggestions.

Try some green vegetables. These won’t provide many calories, or even much micronutrition (you’ve got that covered well already). It will help him develop the taste for vegetables. He may hate what you’ve offered thus far, so keep trying different ones. A kid might detest lacinato kale but love purple kale. Vary the cooking methods. He could hate steamed spinach but love it sautéed in butter. Kids are just people, which means they’re as weird as the rest of us.

Try some meaty bones. Yes, I know your kid isn’t a dog. But toss him a roasted marrow bone. Hand him a chicken drumstick from those pastured chickens. Offer a beef shank. He doesn’t have the teeth to do much, but it’ll help him develop a taste for meat and he’ll gum that thing for an hour. It’s the Primal version of shutting the kid up with an iPad.

Try some white potatoes, cooked and cooled to increase the resistant starch content. It wouldn’t hurt for your kid to eat more prebiotic fiber. These can sometimes replace the sweet potatoes.

Consider some kefir or yogurt. You can easily replace some of the milk with fermented dairy. Get those taste buds exposed to the tang of dairy ferments.

Good job! Oh, and I’m obliged to say, check with your pediatrician, too!

I’ve been vegan for awhile and now that I’ve been diagnosed with an autoimmune illness I’ve done research and maybe I need to eat meat….the challenge is how do I transition back to meat after being vegan for over 10 years? I suspect I no longer have the enzymes to digest meat and I had problems with eggs the last time I tried them. Any advice?

Studies show that going vegan for a month down-regulates production of the pancreatic enzymes used to digest animal protein. This may happen more quickly than a month, but it’s the only data we have. Either way, it shouldn’t take any longer—and likely much shorter—than a month for your digestive enzymes to catch up and start facilitating meat digestion. Until they ramp up, go easy on meat. Don’t eat a full rack of ribs or go or the 40 ounce ribeye challenge for your first meal.

That’s not the biggest issue, even though it’s what most focus on. After all, humans are obligate omnivores. We’ve been eating meat for millions of years. The scrawniest vegan is built to eat meat, even if the machinery responsible for its digestion is a bit rusty. But that’s temporary and easily overcome.

The biggest impediment will probably be the psychology of meat consumption: you’re suddenly eating flesh. You’re “responsible” for the death of a cute, fuzzy animal, a sentient being robbed of its existence so that you can chow down. That’s heavy. And even if you intellectually acknowledge the benefit of eating meat, your subconscious must grapple with its ramifications.

Gotta turn that around on itself. Give thanks to the animal for its sacrifice. Invoke a higher deity if that’s how you roll. But don’t hide from the fact that you’re supporting death; that’ll only gnaw at your subconscious. Acknowledge that you’re a willing participant in the cycle of life and death which has gone on for millions upon millions of years. The flesh of the animal provides the sustenance you and your ancestors have been relying upon for many millennia. That’s beautiful. That’s your heritage. It made you who you are, even if you ran from it for awhile.

I am a 61 yr old female. I’ve been on an LCHF/banting diet for a year now as I have a family history of diabetes and I was diagnosed with fibromyalgia. I have gone down to a very low level of carbs 25g a day been, in ketosis for a few months and lost only a few kilo in weight (my weight is 72kg).

My main concern is that I haven’t felt any benefit from LCHF diet; no energy, no relief from pain in my muscles and joints. In actual fact I have less energy which was already at a low.

Is there anything I can do to enjoy the benefits that LCHF diet is suppose to give?

For those who don’t know, the Banting diet is Dr. Tim Noakes‘ take on low-carb, high-fat diets. Based on William Banting, a formerly obese Englishman from the 19th century who lost weight by reducing simple carbs, the Banting diet will be familiar to everyone reading this: emphasize animal fat, reduce carbs (especially sugars and other simple carbs), load upon on green vegetables, limit fruit and nuts and dairy if weight loss slows.

It’s usually a great way to eat, but as a fibromyalgia patient you might have to take special considerations.

There’s not a ton of good diet research into fibromyalgia. Or research at all, for that matter. For years, it was the “invisible illness.” Patients were told it was “all in their head” or that they were “making it up.” How do you run dietary studies into treatment for a disease that doesn’t even exist?

It’s real, of course. But science is still catching up. Let’s look at what little there is for any clues.

Magnesium: In a recent paper (in Portuguese, but the tables are easy enough to read without translation), researchers compared the diets of people with fibromyalgia to those of healthy controls. 100% of fibromyalgia patients had inadequate intakes of magnesium. This jibes with other studies that have found low levels of magnesium (and manganese, calcium, iron) in hair samples from fibromyalgia patients. Studies indicate that the relationship between magnesium deficiency and fibromyalgia may be causally related. In one, transdermal magnesium (4 sprays per limb, twice a day, using magnesium chloride oil) improved quality of life. In another, oral magnesium citrate reduced the spot tenderness and intensity of fibromyalgia, especially combined with amitriptyline (an antidepressant often used in fibromyalgia).

Try taking 200-300 mg of magnesium (if oral, try citrate, malate, or glycinate forms; if transdermal, go with the oil linked above).

Calories: Fibromyalgia patients ate around 1400 calories to the controls’ 1700 calories, a likely artifact of the lower metabolic rates normally found in this population. Going low-carb, high-fat is a fantastic way to spontaneously reduce appetite, increase satiety, control calorie intake, and lose weight, but if the problem is not eating enough food—as it may be for fibromyalgia—VLCHF may push things unnecessarily low. You probably don’t need to go as low as 25 grams of carbs per day.

Test your vitamin D levels and supplement if you need it.

Light exposure: Getting UV exposure on your skin, even from a tanning bed, can ease fibromyalgia symptoms. Getting natural light exposure in the morning and early afternoon and limiting light exposure after dark can improve your sleep and optimize your circadian rhythm, two major factors in fibromyalgia.

Get light during the day and limit it at night.

Exercise: Typical exercise might not help as much as normal. Intense exercise performed to exhaustion, normally beneficial and anti-inflammatory, has paradoxical, inflammatory effects in fibromyalgia patients. This means if you train like I advise, you’ll want to drop everything down a notch. Sprint, but do really short sprints. Lift heavy things, but keep the reps low. Walk as often as you can (especially in natural settings, which may improve your symptoms), but don’t push yourself too hard or too long. Going so hard and long that your lungs and muscles burn is probably counterproductive. A good barometer is how the exercise makes you feel. If you feel good, if your symptoms improve, it’s “good” for you. If the exercise makes you feel bad or worsens your symptoms, it’s probably “bad.” Aquatic exercise can help. Easy stationary (or mobile) cycling can help.

Exercise, but not too hard. Focus on gentle, enjoyable, frequent movement.

And again, talk with your doctor. Hope it helps!

That’s it for today, everyone. If you’ve got input on any of the questions, leave it down below!