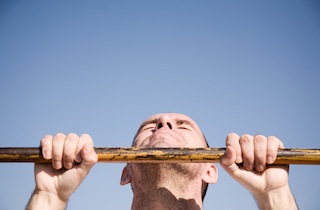 For today’s edition of Dear Mark, I’m answering three questions. The first one comes from Neda, who’s experiencing some issues that may be related to her fasting schedule. How should she modify her fasting? Or should she eliminate it altogether? The second question concerns a common issue: neck pain during pullups. Why does it happen and how can we avoid it? And finally, what’s the deal with red palm oil? I give my take on the controversial oil, drawing on randomized controlled trials and personal feelings about orangutans to arrive at my conclusion.

I have recently tightened up my fasting. I eat an orange or a grapefruit around 1230 or 1ish in the afternoon. Then at 3 I drink coconut water with 2 scoops of whey, chia seeds, matcha powder and green powder and strangely enough I feel tired afterwards. I start to eat my salad and my remaining meal starting at 5 and ending at 9 most of the time.

Why do you think my energy drops with that drink? Is there something you would recommend?

I am a female by the way, thought you should know because I agree long fasting periods I do not think are great for women.

Thank you so much for all of your help,

As you say, women tend not to feel as well with long fasting periods. Fasting at all is more likely to be dicey, to be quite honest. I’ll mention a few possible paths to take.

Keep fasting, but eat more substantially than your current setup has you eating. At about 65 calories, neither orange or a grapefruit really count as “breaking your fast.” So you’re effectively fasting from 9 PM to 3 PM — 18 full hours. And even then, the meal with which you break your fast isn’t really a meal either. Coconut water, whey, chia seeds, matcha powder, green powder? There’s a bit of protein but almost no fat, and the last two ingredients have basically no calories at all. One could even say that you’re fasting from 9 PM to 5 PM — 20 full hours.

A 20 hour fast is a big undertaking for most people. It’s an even bigger undertaking for the average woman. You’re doing that every single day. Instead, break your fast for real — with a solid meal with food that fills you up. Add a few eggs, some sauteéd veggies, and maybe a sweet potato to your fruit. Just something substantial.

Keep fasting, but not so frequently. Instead of fasting like you are every single day, do it once a week at most. Only increase the frequency if your symptoms abate. And even if they abate, consider just sticking with the single fast per week.

Stop fasting. This may be a stretch, but a recent paper showed that in diabetics, fasting until noon increases the blood glucose response to food by inhibiting the normal insulin response. One common symptom of hyperglycemia is sleepiness. Now, diabetics aren’t a different species of human. Non-diabetics likely have similar responses to fasting, just more tempered. Given the length and relative intensity of your fasting, however, this might explain it.

And as always, make sure you fulfill the “prereqs” for effective and healthy fasting if you intend to keep at it:

1. Have a strong handle on your stress — and your response to stressors. If it’s crunchtime at work, intermittent fasting may be too much of an additional stressor to be effective.

2. Don’t overtrain. I’m not sure how much you’re exercising, but regular fasting seems to work best with lower volume exercise. Low rep strength training? Sure, great. Walking? Go for it. The occasional sprint? Right after you. But Daily CrossFit WODs? Probably not a good idea if you’re eating so little and so infrequently.

4. Be careful if diabetic. Consider the paper mentioned above finding that diabetics who fasted until noon experienced an exaggerated blood glucose response to food via inhibition of normal insulin signaling.

After finding Mark’s Daily Apple a few years ago, and learning how great chin-ups and pull-ups are for health and strength training, I started doing them 3 times a week. I started with 3 sets of 3, with one minute of rest between each set, and worked up to 3 sets of 10.

This has been great for strengthening and defining my muscles, but after a few months, I always get to a point where it starts giving me pretty bad neck pain. Not during the exercise, but it’ll creep up slowly the next day, and it’s not severe — until I wake up up the next morning, when the pain is bad enough that just rolling over or sitting up in bed is really hard. It’s better once I’m up for the day, but it still hurts, and this lasts for 2 or 3 days before resolving on its own. And then I give up on the chin-ups/pull-ups for a few months to avoid the pain.

There must be something wrong with my form or technique or something, right? I do feel like my neck is tense while doing the chin-ups and pull-ups, but I don’t see how to avoid that. It’s exercise, the whole point is that it’s supposed to be hard, to stress the body, etc. So the last rep or 2 in each set is always tough, and I do feel tense. So what can I do? Have you heard of this before?

I’ve had the same exact thing happen to me, Anthony. And every single time, going back through my pullup workouts reveals a consistent mistake: I let my technique suffer and my form degrade, and I lead with my chin. It happens to the best of us.

The chin reach is the most common pullup form degradation. I blame the way the pullup is commonly presented. “Chin over the bar!” It’s an innocent cue, but it can cause those who follow it to lead with their chins. Try that, right now, as you read these words.

Jut your chin up.

What just happened? Your neutral spine, starting at your tailbone and running up along your lumbar and thoracic spine to embed itself in your brain stem, broke. If you’re going to lift anything — barbell, heavy rock, your own bodyweight as you hang from a bar — you need to maintain a neutral spine. Heck, nearly every athletic movement whether it’s running, jumping, or swimming flows more smoothly and safely when the entire spine is in the neutral position. If we can’t always achieve it, we at least attempt to. Failing to do so compromises the safety of the movement.

That urge to get the chin over can be persistent. Heck, I still sometimes catch myself jutting that chin upward even though I know better and tell myself every pullup workout not to do it. And yes, I sometimes end up paying for it with a stiff neck. That’s why I’ve come up with a few workarounds to prevent this from happening.

Make sure your thoracic spine and shoulder regions are moving smoothly and healthfully, too.

Oh, and one last thing: film yourself doing pullups. It may not feel like you’re jutting the chin, but you won’t know for sure until you watch yourself.

Thank you for all the info you post and for the tip on Thrive Market. Appreciate it!

Red palm oil? I’ve been a big fan for years. Red palm oil is closer to extra virgin olive oil than other “vegetable oils”; the extraction process is fairly gentle, as the palm fruit is fatty and requires only mechanical pressing to get the oil. Compared to any other fat, red palm oil is extremely nutrient dense — rich in beta-carotene, vitamin E, CoQ10, vitamin K1, and other antioxidants.

Compared to all other vegetable sources of vitamin A, red palm oil has the most bioavailablity — it converts to retinol at the greatest rate. And when you cook leafy greens in red palm oil, you absorb more of their beta-carotene.

A number of studies, mostly in animals, shows the protective potential of red palm oil.

Nutritionally, it checks out. But what about one of the biggest concerns people have with palm oil — the sustainability issue? Most refined palm oil (the kind used in processed food) hails from Indonesia, one of the few remaining homelands of the orangutan. The palm plantations are in direct conflict with the jungles the orangutan calls home. As usually happens, industry wins out and the orangutans lose (and die). So, yeah: it’s messed up stuff. Google Image search for orangutans and palm oil for truly tragic, unsettling imagery.

The orangutan has probably always been my favorite great ape. Ever since I read Poe’s “The Murders in the Rue Morgue,” I’ve had a mild obsession with the orangutan. The wiry power in those spindly arms, the massive flanges on the males’ faces (a marker of high testosterone), the way they can condense into compact orange hairy lazy balls that unfold into enormous ranging hominids, their languid repose in towering trees looking about as comfortable as a human on a couch.

That’s about it for this week, everyone! Thanks for reading and be sure to write down below with any additional input or commentary!