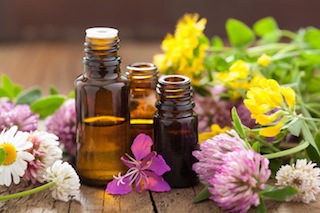 If you spend a day or two on social media sites, you get the idea that essential oils are a panacea that can replace every modern medicine, both over the counter and prescription. Kid got a fever? Rub a little of this oil on his feet. Big job interview coming up in a few minutes? Inhale a little of this to relax. Fungal infection? Splash some of this on. It’s gotten particularly out of hand on Pinterest, where multi-level marketing schemers attempt to convince everyone they absolutely need to become essential oil wholesalers. Conversely, if you hang around in the online skeptic communities (Science Based Medicine, Quackwatch, etc.), you come away with the impression that essential oils are at best pleasant-smelling placebos and at worst expensive poisons. So – who’s right? Who’s wrong? Are essential oils simply glorified air fresheners without any evidence of efficacy, or does the truth lie somewhere between the two extremes?

Let’s first dig into the common claims and the evidence for some of the most popular essential oils.

Reduces fever when applied to feet.

Any truth? A 2014 animal study found that compared to saline, jojoba oil, and minoxidil, topical peppermint oil stimulated the most hair growth with an increase in dermal thickness, follicle number, and follicle depth. Also, there were no “toxic signs,” which is always good.

Relieves and even cures IBS.

Any truth? It’s mixed. Some research shows that peppermint oil can reduce overall IBS symptoms, but a recent placebo-controlled trial found that while peppermint oil relieved transient abdominal pain in IBS, it had no effect on any of the other IBS symptoms. An earlier study supports its use in IBS-related stomach pain, showing that enteric coated peppermint oil capsules improved pain symptoms in kids with IBS.

Any truth? One recent study compared minoxidil (an over the counter hair loss treatment) to rosemary essential oil. Both were rubbed into the scalp on a daily basis. At six months, both groups had experienced a significant increase in hair growth, with the rosemary group having slightly less itchy scalps.

Any truth? A 2013 study placed subjects in one of two rooms — one with a diffuser emitting rosemary essential oil and one with no diffuser — and gave both groups memory exercises to complete. Those in the rosemary room performed better and, according to blood tests taken after the exercises, had higher serum levels of a unique rosemary phenolic compound. Since previous animal studies have shown rosemary compounds interact with memory systems in the brain, the relationship may be causal and indicative of rosemary oil’s efficacy.

Any truth? Well, in coronary bypass surgery patients, lavender oil was able to reduce anxiety, but no more than the placebo control. However, in dental patients, lavender oil aromatherapy reduced anxiety, while the placebo did not; other studies confirm this effect in dental patients. Oral lavender oil seems just as effective (without the side effects, like drowsiness and extreme addiction) as xanax at reducing general anxiety. It’s mixed, then, but I think the evidence is fairly strong that lavender oil can reduce anxiety in people. Germany, for example, has deemed oral lavender oil a legitimate treatment for anxiety disorders.

Any truth? There is one study that found lavender oil to be effective against acute migraine, but the control was a plain paraffin wax candle. Paraffin wax is a petroleum byproduct and potential migraine trigger for some people, so this may not have been an inert control.

Any truth? In human hospital workers, lavender aromatherapy limits the reduction in flow-mediated dilation that normally accompanies a night shift.

Any truth? In pediatric dental patients, orange oil aromatherapy lowered cortisol and pulse rate; similar reductions in anxiety were found in adult female patients. And when they were exposed to orange oil aromatherapy, human subjects undergoing experimental stress experienced very few alterations to stress parameters. Tension, tranquility, and systemic anxiety were all relatively unchanged. It works in rats, too.

Any truth? A 2012 trial found that a face gel based on orange oil, sweet basil oil, and acetic acid applied daily for 8 weeks improved acne symptoms.

Any truth? “Boosts the immune system” is fairly non-specific and vague, but there may be something. In rats infected with a pathogenic protozoa, oral tea tree oil extended their lives and modified the immune response but did not cure them.

Any truth? An animal study used topical tea tree oil mixed with DMSO (a solvent that allows anything it’s mixed with to penetrate the skin) to induce cytotoxicity in skin tumors. An earlier study using the same tea tree oil/DMSO solution was able to inhibit the growth of established skin cancer cells.

Any truth? In a recent trial, tea tree oil mouthwash performed poorly at reducing plaque compared to cetylpyridinium mouthwash and commercial chlorhexidine. An earlier study found tea tree oil had beneficial effects on gingivitis, but not plaque. Tea tree oil does have significant anti-microbial action against common oral pathogens in an in vitro setting, so the potential is there.

The evidence is mixed, as you can see. Essential oils are just mediums for the essence of the plant, and there are thousands of different plants out there; it really depends on what claim and what plant we’re talking about. The evidence for peppermint oil reducing fever may be nonexistent, but that doesn’t necessarily mean peppermint oil is useless against IBS pain and hair loss. Just because your annoying neighbor keeps harping on you to join her MLM empire selling chakra-triggering oil blends doesn’t preclude those same blends from helping you relax —physiologically — at the end of a long day.

Essential oils often do work and actually can improve certain conditions, but they’re victims of their promoters. The testimonials are too breathless to be believed. The evidence they submit is too anecdotal. If they refer to a study when making a claim, it’s usually misrepresented or includes a half dozen oils that make analysis of the specific oil impossible. Plus, the arguments or recommendations they offer often contradict each other. The evangelists ruin it for the science-minded health explorers who might actually benefit from essential oils.

Essential oils as a whole do have evidence of efficacy in a few key areas:

Anxiety and stress: Aromatherapy is quite effective at reducing stress and anxiety. I already mentioned the ability of lavender and orange oils to reduce anxiety, but plenty of other oils have shown efficacy as well. In healthy females, bergamot essential oil increased parasympathetic activity and lowered salivary cortisol. Bergamot works in anxious rats, too. Transdermal application absent aroma detection may also be effective against anxiety and stress, as one study using topical rose oil showed. Most of the citrus oils (PDF), like the aforementioned orange and bergamot as well as lemon and bitter orange all show anxiolytic effects, probably due to limonene, an anxiolytic compound found in all of them.

Antibiotic activity: As a whole, essential oils tend be potent antimicrobial agents. The parent plants have a vested interest in repelling bugs, fungus, bacteria, and other tiny critters with designs on them, and this motivation manifests in their essential oils. In addition, they usually have the ability to break down and disrupt microbial biofilms, those stubborn microbe matrices that can resist many standard antibiotics. Clearly, more research is needed before essential oils can replace antibiotics, but it’s a conversation that we desperately need to pursue given the current state of antibiotic resistance and antibiotic overuse in human medicine and agriculture.

Nausea: Lemon essential oil inhalation can reduce pregnancy-associated nausea and vomiting, and a 2012 review found that both ginger and peppermint essential oils were also effective (though they did identify some methodological concerns). For post-operative nausea, both ginger oil and a blend of ginger, cardamom, spearmint, and peppermint oils may help.

So, what’s the final verdict on essential oils? Bunk or boon?

It’s complicated. It’s tough to give a single opinion that applies to dozens upon dozens of unique essential oils. But we can say a few things that apply to all of them.

Essential oils are not inert placebos. They’re not expensive air fresheners. They are pharmacological agents with bioactive compounds, many of which are powerful enough to rival prescription drugs. But with this power comes randomness. As much as we harp on pharmaceuticals for the unwanted side effects we often counter using another prescription, at least the dosages of the active ingredients are stable and constant. Essential oils? Not so much. There’s no real way of knowing the “dosage” of the bioactive compound, or even whether we’ve successfully uncovered every possible compound present in the plants, herbs, and spices used to make the oil.

Essential oils are also not harmless. For example, topical essential oils can be quite harsh and even toxic. When exposed to air, lavender oil forms strong contact allergens, and compounds in lavender oil have cytotoxic effects on human skin cells. Topical orange oil is a “very weak” promoter of skin cancers.

It’s clear that some essential oils work for some things, while others don’t. And the ones that don’t work for one claim might very well work for another. As I said: it’s complicated.

What about you, folks? Any essential oil users out there? What do you swear by? What do you recommend? Or are you totally convinced that there’s nothing going on here?