Embodiment for Emotional Health: Is Mindful Movement a Primal Key? 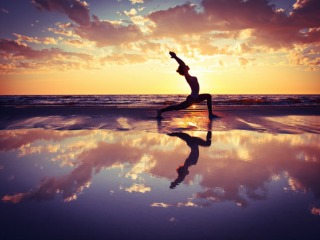 “Women carry trauma in their hips.”

(The stray remark got my attention, too.) I was walking along the beach when I heard it. Two women, deep in conversation, had passed me. Between the waves and my dog’s bark, it was the only snippet I caught. One had matter-of-factly professed it, and the other offered a knowing sigh in agreement. As a trainer, the thought jumped out at me—not so much the gendered suggestion (I have no claim on expertise there) but the idea that emotion gets stored in our bodies and not just in our memories. All of us are at various points in life subject to pain, loss and suffering. Whether we contend with something as severe as trauma or something difficult but normal like grief, anxiety or resentment, how do unresolved emotions linger within our physiology or even particular locations or functions within it? How might these feelings that we retain act as a wild card in our overall health? Finally, in keeping with this possibility, does “moving through” emotional suffering oblige us to move bodily toward healing?

All of this, you could say, flies in the face of the modern, cerebral perspective. Ever since the the 17th Century, the Western sense of “true” identity has been philosophically disembodied (e.g. “I think, therefore I am.). The mind, with its thoughts and sentiment, was separated, elevated above the baser body of instinct and machination. Increasingly, however, that disembodied assumption doesn’t jibe with contemporary neuroscience. And let’s face it. It never quite squared with a primal sensibility.

Research into embodied cognition reveals how our bodies not only respond to our inner thoughts and outer environments but actually have the power to steer our emotional and intellectual reactions (and allow physical sensation to mirror abstract concepts—e.g. a subject judging a person as “warmer” while he/she holds a hot drink).

In essence, how we move and stimulate our bodies subtly but potently influences our emotional state.

Cultures that never philosophically divorced the mind from the body seem to have the edge here. They’re incidentally the wellspring of many movement-based contemplative practices, including yoga, active meditation and many martial arts. Long before even these traditions, however, indigenous groups participated in active, shamanistic ceremonies for healing.

Grok didn’t lie on the psychotherapist’s leather couch after all. Healing for the individual and the collective was simultaneously enacted and elicited through archetypal dance and physical ritual that symbolically embodied sensations of safety, belonging, and integration. (PDF) As observation of these ceremonies reveal, coordinating sounds and rhythms within traditional drumming and chanting respectively harmonize heart rates and produce innately calming Alpha waves. In a deeply visceral way, healing was synchronistically performed as well as received.

Today progressive psychotherapists have begun incorporating movement-based modalities like yoga poses within their practice. As clients talk through their wounds, they enact poses to support that opening and vulnerability. The effect of emotional release, however, didn’t begin in the psychotherapists’ room. Yoga instructors will tell you that “heart-opening” postures, for instance, inspire many a breakdown or breakthrough in their classes.

Fast forward to today, and even Western society has given rise to somatic therapies like Feldenkrais and the Alexander Technique, which (in a simplistic nutshell) reason that errant physical alignment or movement patterns can skew our sensory perception and hamper well-being.

But what about regular exercise? Can other, more basic physical activities offer a psychic release? Research is still clarifying this answer, but theoretically and anecdotally, it appears to be yes. We’ve long understood that exercise neurochemically acts on and within the brain. While studies have focused on benefits to cognition and mood, the crux here may be what happens in the moment rather than what comes afterward or builds over time. The interesting question may be, how does physical activity neurochemically allow us to engage certain brain centers or functions differently?

Can exercise, of a general or targeted sort, create a uniquely potent window for dealing with problematic memories and “lower” limbic responses?

Trauma experts like Peter A Levine note that the intensive fear of certain experiences “freezes” us like a wild animal caught by a predator. Vestiges of that momentary response, when severe and/or frequent enough, may never quite resolve. The physical cycle of fear, Levine posits, requires processing and closure for fully normal functioning to be restored. Similarly, the study of somatoemotional release within the craniosacral therapy field suggests that emotions can become locked within us and offers body positions for their effective release. These theories and fields aren’t without controversy, but they illustrate perhaps how movement may, indeed, move us emotionally as well as physically.

As a trainer, I’ve known many people who spontaneously took up exercise of one kind or another following points of major tragedy or transition in their lives. There was something about the shift in their needs and, in their words, something to the freedom they received on a long run or a challenging climb that became their best therapy. At times, something in their exertion opened the emotional floodgates. These moments, some have shared, were turning points in their grief or struggle.

Maybe for them there was something in that flow state, something to the re-grounding in sensation when they spent much of the day otherwise numb. Movement became the antidote to overwhelm and even offered access through emotional obstruction.

It’s an intriguing thought. I might not be ready to call it an official Primal principle, but movement for emotional health and psychological processing might just be one of the most essentially Primal concepts we can enact in our lives.

Thanks for reading, everybody. Does this concept resonate with your experience? Share your thoughts, and have a great end to the week.