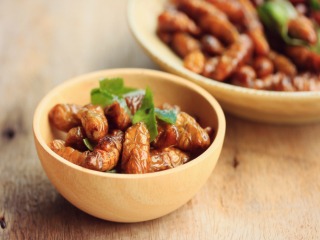 Three years ago, my pal Gabi Lewis—founder of Exo, who make the best cricket protein bars on the planet—made a compelling case for eating more insects. Today, I’ll build on these arguments and, based on new evidence, offer even more reasons you should consider incorporating edible insects into your diet.

Though few people reading this consider insects anything but a novelty, for many human cultures they were (and are) staple foods. Humans have been eating insects for millions of years, starting with our distant ancestors and continuing through the present day.

Fecal fossils (coprolites) from Mexico show evidence of prehistoric consumption of ticks (evil bastards), ants, larvae, lice, and mites. Both the Bible and Koran permit insect consumption, particularly of locusts. Aristotle snacked on cicadas. The Hadza of Tanzania love wild honeycomb with bees still nestled in the wax cells.  Thailand has incredible outdoor bug markets, with baskets of spiders and crickets and dragonflies and scorpions and entire ant colonies (queen, workers, soldiers) ready to be eaten. Chapulines, stir-fried crickets in chile and lime, are my go-to appetizer anytime I visit a Oaxacan restaurant.

The squeamish are the weird ones.

It makes sense, doesn’t it? Insects are plentiful and tend to travel in bunches, particularly in tropical climates. You can grab ’em without tools or ridiculous amounts of planning and coordination. Depending on the insect, hunting it won’t get you killed (stung, maybe). They’re a relatively easy-to-obtain, difficult-to-extinguish, reliable source of animal protein. Not every eland hunt was successful, after all.

Okay, but why does this matter for the average Westerner already eating quality animal foods?

According to a 2013 FAO report, broader incorporation of edible bugs could balance the worldwide food (and animal feed) supply and provide animal protein at a lower price-point and ecological footprint to those who desperately need it but aren’t in a position to eat pasture-raised, shade-grown, gluten-free beef.

Insects are clearly a promising avenue for populations who can’t afford or obtain precious animal foods. What about someone like me—who can afford and obtain high quality pastured meats?

What’s in it for me?

Eating the whole animal is the goal of most conscious meat-eaters. It’s more sustainable—no waste. It’s more nutrient-dense—you eat organs, connective tissue and muscles, not just the latter. But it’s a pain, since we buy everything piecemeal these days and not every bit is even available. When you eat an insect, you eat the whole animal. I’ve love access to grass-fed cattle the size of mice that I could pop into my mouth whole, but that’d take some serious genetic engineering. Insects (along with shellfish and small fatty fish) work for now.

In one recent study, researchers compared the mineral contents of four edible bugs—crickets, grasshoppers, mealworms, and buffalo worms—to that of good old beef. Both crickets and grasshoppers had more iron than beef, and other minerals like magnesium and calcium were more bioavailable from bugs than the same ones found in beef.

A previous overview (PDF) of the insect nutrition literature by the UN’s Food and Agriculture Organization (FAO) is worth reading. Here are some of its findings:

A 3-ounce serving of mopane caterpillar provides over a gram of potassium, half the calcium of a glass of milk, almost half the RDI of magnesium, 200% the manganese RDI, 400% the iron RDI, 100% the copper RDI, and more zinc than beef.

Most insects are extremely high in thiamine (B1) and riboflavin (B2), and a great many are high in B12.

An insect’s exoskeleton is made of chitin. If we have enough chitinase, the enzyme that breaks it down, we can convert chitin to chitosan. if we don’t produce chitinase, chitin has the potential to act like fiber. Why does this matter?

Chitosan is a cool compound. There’s very little study into it, but it may increase fecal excretion of dioxins and PCBs (two prominent xenoestrogenic compounds) when eaten before breakfast, help people lose weight, and lower oxidized LDL.

Fiber is also helpful. If we can convert “animal fiber” (various connective tissues like cartilage and tendons) into short-chain fatty acids, I wouldn’t be surprised if “bug fiber” has similar effects.

Exo is doing very well. I’m happy to have invested in them.

The consumer response to cricket products has overwhelmed supply. People are eating it and making products out of it faster than they can make the stuff. That’s going to drive innovation.

Not too long ago, the EU released a report recommending a variety of insects, including houseflies, crickets, and silkworms, for use as human food and livestock feed. I’m not sure edible houseflies will ever catch on as human food, but otherwise it looks credible.

According to a recent survey, about a third of Americans are “interested in eating more bugs.” That number is trending upward, too. Another study found that youth, especially males with “weak attitudes” toward meat, are increasingly open to eating insects. The more concerned they were about environmental issues, the more likely they were to be on board with insects as a significant portion of their diet.

I expect some developments moving forward:

Greater realization of insects’ potential as a savory ingredient

Right now, the majority of insect flour products on the market are on the sweeter side, incorporating dates and other sweet fruits as binders. In contrast, most insects were and are traditionally consumed as salty, savory foods, like the grilled dragonflies of Bali, the fatty witchetty grubs of the Australian outback, or the spicy, salty, citrusy chapulines of Oaxaca. I think that’s the next culinary frontier for entomophagy—celebrating, rather than hiding the flavor of the bug itself.

Just like chickens and pigs, the fatty acid composition of an insect depends on the fatty acid composition of its feed. If you raise a cricket on the same soy and corn garbage we give pigs and poultry, that cricket will have a ridiculous amount of linoleic acid. If you roast and grind that cricket into cricket flour, you’ll damage a lot of the fragile PUFAs.

On the other hand, if you put more thought into that cricket’s feed, you’ll be able to create better fatty acid profiles. Feed it algae, and you might boost the EPA/DHA content. Feed it more MUFA and SFA, you get a cricket higher in both fats that can withstand roasting and grinding.

Chickens are avowed omnivores if you let ’em, feasting on lizards, frogs, and as many insects as they can find. The ancestral environment of the chicken—southeast Asian jungles—teems with insects. Pastured chickens produce incredible eggs, and it’s not only—or even mostly—caused by all the weeds, greens, and grasses in their diet. Equally important are the insects they get to eat. Right now, non-pastured chickens might get a few grubs or mealworms as treats. It’s not enough to change the quality of the eggs.

As bug farming gets easier, cheaper, and bigger, I expect feed insects will replace a large portion of the corn, soy, and corn-and-soy byproducts that currently comprise poultry feed. And the eggs will get much better.

All in all, I expect big things. Bugs will get cheaper and tastier. Producers will get better at raising them, and the food and restaurant industries will get better at preparing them. Consumers are growing more open to the idea of eating them, so demand will rise. Growing populations will need the vitamins, minerals, fats, and protein only animal foods can truly provide, and insects will be an obvious solution.

But it’s not a foregone conclusion. As a member of the Primal community, you drive this train. If anyone’s going to get the ball rolling, it’s you all.

Go down to the local Oaxacan restaurant and try the chapulines.

Find a restaurant near you serving insects.

Or order your own and start experimenting in the kitchen.

Have you eaten bugs yet? What’s your favorite? If not, what’s stopping you?