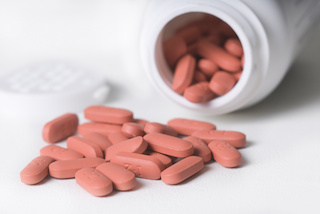 For today’s edition of Dear Mark, I’m answering a bunch of questions from readers drawn from the comment sections. First, is there a better, whole foods-based alternative to prebiotic powders, meals, and flours? Turns out there are many, and I give a few of my favorites. Next, what’s the deal with NSAIDs and the gut? Everyone knows they increase leaky gut, but can they also affect the gut biome directly? I finish up by answering several readers questions regarding hydration. Can stevia replace syrup in the hydration solution I posted? Does anything change for post-menopausal women? Does milk work?

Can you give some good, practical examples of prebiotic foods? I am taking in resistant starch in the form of potato starch and it seems to be beneficial (or at least not harmful) but I know there are other options as well. I just don’t think I can eat that much raw garlic (or the people around me would appreciate it).

Any suggestions on ways to get other prebiotics in or supplements (inulin?)

Sure, there are tons of whole foods prebiotics, most of them delicious, easily accessible, and more nutritious than their equivalent in refined fibrous powders.

Instead of inulin powder, eat Jerusalem artichokes (fartichokes), onions, leeks, or chicory root. They are whole foods and will provide ample micronutrients.

Eat nuts and seeds. Modest amounts of most nuts and seeds will help. Almonds and pistachios seem to have the most prebiotic potential, while macadamias are quite low in any fiber at all.

Don’t forget about “animal fiber.” That’s the gristle, the cartilage, the chewy bits at the end of chicken bones that can have prebiotic effects in our guts. Plus, animal fiber provides the all-important collagen that so many modern eaters are missing from their diets.

Just eat a wide variety of plant matter. Some broccoli here, some Brussels sprouts there, a handful of blueberries, some almonds and pecans, a roasted kabocha squash, a Big Ass Salad for lunch—that sort of thing. In addition to different types of fiber, colorful fruits and veggies also provide polyphenols, which can have prebiotic effects.

And yeah, I’d lay off the raw garlic. While a couple cloves are definitely beneficial (and may even paradoxically improve your body odor), eating enough to get the prebiotic benefits is a stretch.

I’m surprised you didn’t address the negative effects of NSAIDS on the gut, or do NSAIDS affect the gut wall directly and not the biome?

When gut-aware people typically caution against NSAID overuse, they focus on their ability to directly damage the intestinal lining. This is a big problem, to be sure. NSAIDs can worsen gut barrier dysfunction and increase intestinal permeability in patients with IBS (who frequently take it to deal with the symptoms). An animal study indicates that NSAID overuse may even increase gluten sensitivity by “potentiating” its barrier dysfunction.

This direct effect on gut bacteria isn’t unique to NSAIDs. As Art Ayers put it recently, “all drugs are antibiotics.” Almost every pharmaceutical (and many “natural” products) interacts with the gut biome on some level. Many drugs were designed as antibiotics or derived from natural compounds whose original owners—plants—used them to fend off microbial attacks. For instance:

So NSAIDs are not alone. And it may be that these drugs, which many people take chronically, are more responsible for widespread antibiotic resistance than antibiotics, which are usually taken for just a week or two.

1. Does stevia count as “sugar” in the water? Carbs kill me no matter where they come from, or why I consume them.

2. What about post-menopausal women–what should THEY do lacking a luteal phase?

Unfortunately, as it has no calories stevia doesn’t work for the purposes described in the hydration post. For those who haven’t read it, I gave a quick recipe for a hydration formula: a pinch of salt and a teaspoon of maple syrup added to water. The salt provides much-needed electrolytes and the syrup provides glucose and fructose to facilitate the absorption of water through small channels in the intestines. The sugar is not going toward caloric requirements in the strict sense. It’s fueling the cells absorbing the water. Do you think a single teaspoon—4 grams of sugar—will really be too much for you? Maybe, but I doubt it.

Also, remember that this recipe is intended for athletes and other people engaged in serious training, often in warm conditions promoting heavy fluid loss. If you’re taking it easy, the salt/sugar solution is probably unnecessary. If you’re going hard enough to warrant this solution, you’ll burn right through any errant milligrams of glucose that make it past.

What about post-menopausal women? The same solution applies. My point in mentioning it was that sodium requirements may be elevated in some women during the luteal phase, so they should take special care to obtain enough sodium when exercising. If you’re post-menopause, you can still benefit from the solution, but it may not be as critical.

Milk being effective isn’t all that surprising. Breastfed babies live entirely off the stuff, obtaining all the electrolytes and fluids they need to stay hydrated, even in hot climates.

To sum up, on a hot day a glass of lukewarm milk may feel like a bad choice, but it will definitely hydrate you. Just make sure you’re tolerant; explosive diarrhea has the opposite effect on hydration.

That’s it for today, folks. Thanks for reading! Be sure to throw any tips or responses you have down below!