Do Low-Carb Diets Cause Insulin Resistance? 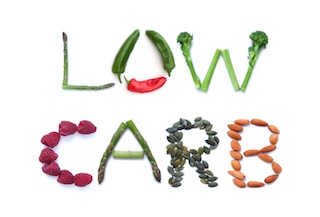 A few weeks back in the “How to Improve Your Insulin Sensitivity” post, I apparently dropped a bit of a bombshell: that very low carb diets can induce insulin resistance. Many of you wrote to me asking about the effects of low-carb dieting on insulin sensitivity and wondering whether you should begin eating more carbohydrates to counter it. Well, maybe, but there’s a right way and a wrong way to eat carbs if you’re low carb. The wrong way is to just add a ton of carbohydrates on top of your low-carb Primal eating plan without changing anything else. Doing that, especially in perpetuity, will likely lead to weight gain, hyperinsulinemia, and even more insulin resistance. Bad all around.

Now, many people are perfectly happy on a perpetually low-carb diet. I function quite well on a low (but not very low) glucose diet, hovering around 100-150 grams a day and often dipping below that. I might go even lower if I didn’t love vegetables and berries so much. But, assuming you are experiencing physiological insulin resistance caused by a very low carb or ketogenic diet, what happens when you do want to incorporate carbohydrates in your diet?

What if you want to pursue high intensity training or high performance goals that your current diet isn’t supporting?

What if you’d like to try out a few more carbs on your ketogenic diet — is such a thing even possible?

What if you need to take — and pass — an oral glucose tolerance test (OGTT)?

How do you eat the carbs, get the benefits, and avoid or limit the negative effects that normally accompany carb consumption in an insulin-resistant state?

I want to support higher-intensity training and performance, but I’m low carb.

Although many people following a lower carb Primal eating plan find that their training performance improves across the board, those seeking the upper echelons of high-intensity, glycogen-dependent performance usually need to regularly consume a somewhat concentrated source of glycogen substrates. How does a physiologically insulin resistant low-carber momentarily increase insulin sensitivity to support higher carb consumption for training?

This one’s really simple, actually, because the problem is the solution: they support their training and improve their carb tolerance by training really hard. High-intensity training, whether weight lifting or sprints or intervals or CrossFit, is a potent inducer of increased insulin sensitivity. You could take one of the most insulin resistant populations around (type 2 diabetics), have them do a few 30 second all-out sprints on a bike with 4 minutes of rest, and see big improvements in insulin sensitivity. HIIT turns your body into a metabolic furnace. It increases the capacity of your skeletal muscle to burn both fat and carbohydrates. That’s why whenever a person asks me about stalled weight loss or stubborn fat, I ask “Are you sprinting?”

I want to eat more carbs, but I’m on a ketogenic diet.

There are two basic ways to construct a ketogenic diet that includes carbs: with one big weekly carb load (the classic CKD) or multiple smaller carb loads adjacent to training sessions (often called the targeted ketogenic diet, or TKD).

On a CKD, you spend the majority of the week and your workouts in ketosis and devote a day or a pair of days to eat lots of carbs. You might be ketogenic Monday through Friday, exercising all the while and capping the work week off with a really intense glycogen-depleting training session, then go high-carb, low-fat Saturday through Sunday to refill your depleted and newly-insulin sensitive muscle glycogen stores.

On a TKD, you spend the majority of your time in ketosis but selectively eat carbohydrate before, during, and/or after your workouts. Most people seem to benefit most from pre- and peri-workout carbs. These aren’t large carb loads — 15-30 grams of relatively fast-absorbing, simple carbs. If you don’t want to opt for dextrose or other powders, a baked potato works well.

Whatever option you choose, you’ll need to deplete glycogen if you want to include carbs in a ketogenic diet. As long as you have a glycogen debt, any carbs you eat will go toward restoring those glycogen stores and won’t interfere with ketone production.

I want to pass an oral glucose tolerance test.

In mammals, pregnancy slightly increases insulin resistance and glucose intolerance to reduce nutrient uptake by the mother and preserve it for the growing fetus. This is normal and healthy and important. We do it for the kids. But too much maternal glucose intolerance means too high a nutrient flow to the fetus, prompting excessive growth and potentially untenable (and painful or even dangerous) birthing logistics. To avoid this situation, to head it off at the pass, pregnant women are given a sickly sweet drink containing 75-100 grams of pure glucose, which they must drink on an empty stomach. Their blood sugar levels are monitored at 1 and 2 hours after downing the nasty stuff. If you hit 140 mg/dl or higher at an hour, you’re in the danger zone of prediabetes and have to take further tests.

Low-carbers are at risk of failing these tests because of the low-carb-induced physiological insulin resistance. Luckily, there’s an easy fix:

For three days leading up to the test, eat at least 150 grams of carbs a day. This will increase the activity of your carb metabolizing machinery and smooth out any low-carb-induced insulin resistance. You’ll probably want to drop fat a bit to accommodate the extra calories.

Side note: if you’re pregnant and craving carbs, eat them. Don’t neglect the needs and desires of your body. Just try to stick with better quality carbs (potatoes, sweet potatoes, and other tubers, fruit, well-prepared low-toxin rice) and limit/avoid low quality carbs (bread, pasta, and other grains, pastries, cookies, potato chips, crackers, etc). Your body (and the tiny growing body you’re carrying) may very well need more carbohydrates, but it doesn’t need the trans-fat, sugar, gluten, and other junk that accompany conventional “carb” sources. I always want to throw this in so pregnant women and their partners don’t feel burdened to conform to some very low-carb ideal even as their bodies are crying for the opposite.

If you’re still freaking out about Primal eating making you insulin-resistant, take a breath. Chances are you’re not. Most people eating Primal are eating tons of vegetation and getting around 100-150 grams of carbs from that vegetation, which is plenty to stay insulin sensitive. It’s usually only when you dip down below 50 grams, start flirting with ketosis, and relying entirely on fat and fat-based fuels for energy that insulin resistance occurs. And when that happens, it’s for a very good reason — to preserve glucose for the part of the body that truly needs it: your brain.

Insulin resistance isn’t such a big deal when you don’t have loads of insulin floating around and the good thing about the Primal way of eating is that it reduces the insulin load. What do you know? The overall insulin load goes down when you eat fewer foods that require large amounts of insulin. Again and again, studies that put folks on low-carb diets find that they almost always lead to lower insulin levels. If you’re not encountering loads of insulin, being a little insulin resistant isn’t the mortal danger we often assume it to be.

Thanks for reading, everyone. I hope those people who were worried feel better, and those who wanted to include more carbs in their low-carb or ketogenic diets feel empowered and able to do it.