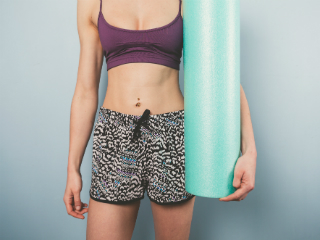 I own a foam roller. Every fitness facility I’ve visited in the last three years has hosted a large arsenal of foam rollers, lacrosse balls, and other instruments of fascial torture. The CrossFitter community has 2.3 per capita. I hear K-Starr sleeps on a bed made of lacrosse balls with foam rollers for pillows. Everyone and their grandma has one. I’m not even joking; I saw a group of track-suited seniors doing some kind of a synchronized foam rolling routine in the park recently. The things are everywhere. And you can certainly spend an inordinate amount of time rolling around on the things, causing all sorts of painful sensations that should, in theory, help you. But does it really help?

As I mentioned earlier, I have one. I’ve used it and, I think, benefited from it. But it hurts. It’s pretty much the most unpleasant thing you can do. Not just because of the pain, but also the tedium. It had better be worth the trouble.

What does the science say?

What foam rolling seems to do really well is increase range of motion without harming performance.

Several other studies have found foam rolling to improve range of motion at the hip and knee without hurting performance.

Performed post workout, foam rolling may reduce delayed onset muscle soreness (DOMS) and the associated hit to performance (hard to move when you’re sore all over!), making it an effective if moderate recovery tool.

After a heavy squat workout, subjects did 20 minutes of foam rolling immediately, 24 hours, and 48 hours post-workout. Four weeks later, they did the same workout without any foam rolling afterwards. Foam rolling decreased DOMS and mitigated the performance decrements.

Another study had similar results, finding that foam rolling after a squat workout reduced soreness and improved vertical jump and muscle activation.

Hamstrings see mixed results. Several studies find a lack of effect. In a recent one, foam rolling had no additional effect on hamstring range of motion or tightness in people with tight hamstrings when added to regular static stretching. Another found that 2 minutes of foam rolling was insufficient to improve hamstring tightness or increase knee extension range. Yet another study found that foam rolling was effective at increasing hamstring flexibility, comparable to contract-relax stretching.

In my experience, the hamstring isn’t a great candidate. I rarely feel any tender spots on my hamstrings with the roller. Using a lacrosse ball produces some tender spots, but the foam roller might just offer too diffuse a stimulus to work. One study had decent results using a roller-massager on the hamstrings, which is kind of “rolling pin” for your tissues that lets you really bear down.

Lately, folks that I respect (like Angelo Delacruz of Vitamoves) have been saying not to foam roll the IT band. That the real cause of IT band issues is in the surrounding musculature, particularly the glutes. This makes sense. The IT band is a tough and fibrous swathe of connective tissue that connects to and supports the most powerful muscle group on the body—the hip-glute-hamstring-quad complex. Rolling around on some foam isn’t going to do much to such an impressive piece of physiological real estate.

Yet I’ve experienced direct benefits to knee pain after foam rolling my IT band for a few minutes. I’ll do a set of squats, feel a sharp pain in my knee, suspect the IT band is inhibiting something, foam roll the band and focus on the tenderest spots, and squat again pain free. Am I fooling myself? Maybe. But I’ll take it.

It’s pretty clear that foam rolling doesn’t do what a lot of proponents say it does:

Foam rolling doesn’t “stretch” or lengthen the tissue. You can’t squeeze out any extra length like you’re rolling out some dough.

Some people think foam rolling opens a window of opportunity for better movement. You roll a tender spot. For whatever reason, your nervous system has determined that this is the proper, safe range of motion for you. Foam rolling clears that out, giving you a short opportunity to establish a new safe pattern. More than physical adhesions, it’s removing neuromuscular blocks and harmful patterns. You reset the system and reprogram it.

Others think foam rolling relies upon diffuse noxious inhibitory control (DNIC). DNIC is how the brain dampens pain. Usually, pain increases survivability; it occurs to warn you against danger. If something hurts, your body’s trying to stop you from hurting yourself more seriously. But sometimes the brain “decides” that maintaining the pain is more trouble than it’s worth or more dangerous. If a solider loses a limb in battle, he might not feel much pain until he’s able to get to safety. If he felt the full pain of the lost limb, he’d be unable to save himself. That’s DNIC—the brain determining that reduced pain is beneficial to survival and less dangerous than prolonging it. In causing momentary pain that we regard as beneficial and necessary, foam rolling may “tell” the brain to turn the pain off.

Whatever the mechanism(s), it can work.

Foam rolling before your workout is better for range of motion and performance, especially if you take advantage of the open “movement window” and move. Foam roll, do some mobility drills, then get to training.

The majority of the research deals with standard foam rollers, but any self-myofascial release tool (lacrosse balls either individual or taped-together, roller-massagers, Rumble Rollers, your own knobby elbow) should produce similar effects.

In some respects, foam rolling only treats the symptoms. If your incorrect movement patterns, your life stressors, and your lack of regular movement are causing the tissue issues, foam rolling will help you feel and perform better but won’t “fix” the underlying problem. Unless you fix the problems causing the pain and mobility issues, you’ll have to keep rolling.

The research is equivocal. Sometimes it works, sometimes it doesn’t, and despite some promising hypotheses, no one is quite sure why. That doesn’t mean you can’t benefit from foam rolling. Based on the research, thousands of anecdotes, and my own experience, I’d say it’s worth a shot.

Thanks for reading, everyone. What’s your experience been with foam rolling? Useful, placebo, pointless, harmful? Let’s hear all about it down below!