Did Grok Suffer from Seasonal Allergies? 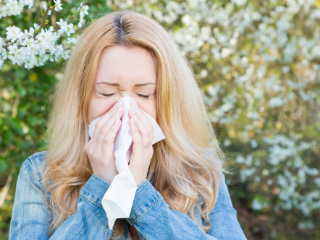 Spring has sprung across most of the country. Awesome, right? Not if you’ve got seasonal allergies. Anyone with a severe case of hay fever knows how horrible it is being outside on a windy otherwise beautiful spring day with pollen blowing and rapacious bees buzzing around. Your eyes water and swell up. Your nose congests, you go into mouth breather mode. Pressure headaches start. You can’t taste your food. You can’t really see through the tears and redness. Everything above the neck itches. Sneeze attacks seize you. You’re supposed to be in heaven. It’s all so lovely. Yet all that beauty, greenery, and life are lost on you. Spring is your enemy when you have hay fever.

It’s bad enough as a city dweller who loves the outdoors. At least you’ve got somewhere to go to get away. Imagine you’re a hunter gatherer with hay fever. Your entire life occurs outside. There’s no “indoors.” Even your shelters blend seamlessly with nature. Your “work” is all outside. There’s no escaping the pollen, the environmental allergens, the seasons. And there’s no Benadryl or Claritin to mitigate the symptoms. Yeah, Grok would have really hurt if he had to deal with seasonal allergies.

First, why the hell do we get seasonal allergies, anyway?

Seasonal allergies occur when your innate immune system perceives airborne pollen as a threat and overreacts to its presence in your body with a flood of histamine, producing runny nose, itchy eyes, nasal congestion, sneezing, headaches, and other symptoms. This type of response makes sense with foreign substances that are intrinsically dangerous, like pathogenic microbes, poisons, and toxins, but there’s nothing inherently dangerous about pollen. What gives?

A long time ago, everyone had parasites—roundworms, hookworms, pigworms, and others. Heavy loads can cause serious nutrient deficiencies, anemia, stunted growth, impaired neurological development, but from studying modern populations who still carry parasites, we know that these bugs can also confer protection against autoimmune diseases, food allergies, and other immune-related conditions. In moderate doses, they tame overactive immune systems by giving them something to do. The constant presence of parasites keeps the immune system busy, and a busy immune system doesn’t have the time or energy to overreact to harmless intruders like egg whites. This is the basis for helminthic therapy, which I wrote about last year.

Pollen allergies are mediated by IgE, the very same antibody system that responds to parasites. Modern populations with high parasite loads tend to have lower rates of seasonal allergies. Modern populations without high parasite loads—like the people lucky enough to be reading this blog—tend to have higher rates of those conditions.

Some folks have more “active” immune systems based on genetics. Like the Neanderthals. Neanderthal coprolites show evidence of heavy parasite loads. Neanderthal DNA sequencing shows evidence of innate immunity genes meant to counter parasites. When ancient humans encountered Neanderthals and inter-bred, these immunity genes—which enhanced fitness in the new environment—introgressed into the offspring. Sure enough, populations with the most Neanderthal introgression, like folks of European and Asian descent, have the most hay fever. Their “enhanced” immunity doesn’t have enough to do in the modern sterile environment.

Though genes are a major determinant, they’re not the only one. Environment matters. Otherwise, people with the genetic propensity toward overactive immune responses to innocuous allergens like pollen would be sneezing from the womb. But they don’t. Sometimes those genes get expressed. Sometimes they don’t. They aren’t your destiny.

The sterility of your childhood environment plays a big role, with kids who grow up on farms tending to get lifelong protection from hay fever. Part of this is stems from exposure to pollen and other irritants (not to mention the microbes), but it could also be the “farm milk”; raw milk consumption is associated with protection against hay fever.

Omega-3 status seems to matter. Higher EPA in RBCs and more ALA in the diet both reduce incidence among German adults, and in Japanese females, increased intake of fish fat reduces the incidence of hay fever.

Your gut health is likely important, as the gut influences everything. Food allergies and intolerances are well-known consequences of poor gut health and increased gut permeability, but those leaky guts may also allow non-food allergens into circulation to stimulate immune responses. There’s a lot of circumstantial evidence to suggest this is the case:

We’d need further research, but it looks promising to me.

Introducing small amounts of pollen through the consumption of raw local honey can improve allergic sensitization and reduce hay fever symptoms. But it has to be the pollen you’re actually allergic to. Researchers found that eating birch pollen honey before the season commenced reduced birch pollen allergy symptoms and resulted in less usage of antihistamines when compared to eating preseasonal non-birch pollen honey.

Stress could worsen hay fever. According to research, hay fever sufferers with the worst symptoms are most likely to report being “stressed.” Those who are “relaxed” tend to have milder symptoms. The causation could be reversed, of course, with severe hay fever causing increased stress. Or it could be circular, with stress levels and hay fever severity both feeding each other. After all, we know that stress makes gut health worse.

In fact, one of the most frequently-reported benefits of going Primal is the cessation of seasonal allergies. They drop grains, improve their gut health, eat more fish and less omega-6, take probiotics or eat fermented food, start getting some sun, realize the value of nature and spend more time outdoors being exposed to pollen and other seasonal allergens, and things change. Their noses clear up. Their eyes stop itching. Eventually, the pollen doesn’t bother them so much. Spring becomes a friend, not a foe. Most people discount the impact of hay fever, but it can really detract from your quality of life. It’s a biggie.

To answer the question, Grok certainly had the genetic potential for hay fever. But several factors, including parasite load, gut health, sun exposure, dirt exposure, diet (including omega-3 and honey intake), and a relatively low-stress lifestyle probably meant he wasn’t sneezing, coughing, and mouth-breathing up a storm. His immune system had better things to do than freak out about a little birch pollen.

Thanks for reading, everyone. How has going Primal affected your seasonal allergies?