Dear Mark: Vitamin D for Babes, Ingredient Bait and Switch, and Kettlebellin’ for Strength or Cardio? 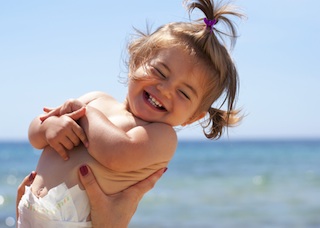 For today’s edition of Dear Mark, we’ve got a three-parter. First up is a controversial topic: vitamin D supplements for breastfeeding babies. Do they need it? Can they get enough through mother’s milk? Or is there another, better method for ensuring optimal vitamin D levels in breastfeeding infants? Next, what’s my take on the ol’ ingredient bait and switch employed by food manufacturers? And finally, say a person’s trying to program kettlebell training into their weekly routine. Should they consider it cardio, strength, or something else entirely?

First off, a sincere thank you for being such an awesome resource!!

So I was hoping to get your opinion on Vitamin D supplementation in newborn babies.

I have a five week old son, I also have four and 10 y/o old daughters. I was surprised to find out when we were checking out of the hospital with my son that it is now recommended that infants get 1 ML or 400 IUs of Vitamin D daily. This was not the case just four years ago when my daughter was born.

I am a big believer in the benefits of getting the proper amounts of Vitamin D. However, I am not really a big fan of supplements unless medically necessary and something just doesn’t sit right with me giving it to my newborn- especially because we never did with my other children and they are healthy primal kids.

It seems like the rationale for the rec is that babies have sensitive skin so they can’t spend much time in the sun, and Vitamin D does not come through breast milk as much as some other vitamins/ minerals.

Would love to hear your thoughts.

Thanks for the kind worsd, Ryan.

In the US, infant rickets appears almost exclusively in infants who are breastfed. That may come as a surprise to some of my readers, but breastfed infants with rickets were also likely to receive no vitamin D supplementation and very little sun exposure. So it’s probably a combination of poor maternal vitamin D status, inadequate maternal vitamin D intake, lack of sun exposure for both the mom and the infant, and inherently meager levels of vitamin D in breast milk.

Is there anything you can do to increase vitamin D levels in breast milk enough to give your nursing infant enough? Yes.

In one study, mothers taking 3.3 micrograms, or a mere 60-70 IUs, of vitamin D via cod liver oil were unable to impact their breastfeeding infants’ levels.

In another, a much larger maternal daily dose (6400 IUs) was able to replicate the effects of giving infants 300 IU directly.

So it can be done via supplementation, provided you take enough (~4000 IU minimum). Maternal sun exposure may also work, but I haven’t seen any corroborating evidence.

Supplemental vitamin D is probably fine. 400 IU/day is usually enough to prevent rickets and keep vitamin D levels above 50 ng/mL. Not always, though. In Izmir, Turkey, vitamin D deficiency was “worryingly high” in 4-month old infants despite 400 IU/day supplementation. This was particularly true in winter months. Getting your kid’s levels tested is a good idea if you go the supplementing route. Apply a few drops to the nipple just before feeding. That’s the mother’s nipple, by the way.

Your baby can also supplement with cod liver oil, which has vitamin D (and vitamin A, for that matter) and has been shown to reduce the incidence of upper respiratory tract infections in children. Some tots even like the taste of fermented cod liver oil, which is just crazy if you’ve ever tasted it yourself, but who knows? Kids are weird. I know one guy who actually gives his 2 year old daughter capsules as a treat. He actually has to prevent her from eating too much.

There is another method, of course. I prefer this one to the others, and I think it confers additional beneficial effects beyond improving infant vitamin D status: light but daily sun exposure. Infants aren’t going to burn up because of a minute or two of full sun exposure. Make it a bonding experience. Strip down to your skivvies (the both of you, and bring the other parent along, too) and flop down in the sun. Expose every nook and cranny. Return inside or cover up when the little one’s skin starts to feel warm to the touch. Avoid pinkness. A study from 1985 found that just 30 minutes of full sun per week wearing a diaper was enough to keep vitamin D levels topped off in exclusively breastfed infants — it really doesn’t take much more than five or six minutes a day.

Those expert health recommendations that infants all receive vitamin D drops presuppose that they aren’t getting any sun exposure, which is probably a safe assumption for most. That’s kinda been drilled into parents’ heads for generations: avoid the sun at all costs! Your fragile baby will literally wilt in the sun. But it’s not true. It’s safe, as long as you’re smart about it. It’s most likely how most infants got adequate vitamin D for most of our history.

I “tolerate” erithrytol and xylitol, but prefer to use things like stevia, barring that, honey or maple syrup, but categorically refuse Truvia. The reason is that while they advertise it is stevia, the ingredients and nutrition panels reveal that it is mostly erithrytol with barely a nod in the direction of a stevia bush.

Apparently parity between the front and back labels is too much to ask at the grocery store.

Any thoughts on this?

It’s a huge issue, James, and you’re totally right. As you say, even if the “hidden” ingredients aren’t in and of themselves offensive or particularly undesirable, the deception rankles. Take something like Spectrum Organic Olive Oil Mayonnaise, which, going by the words printed on the label and the prominent depiction of an olive branch, should be made of olive oil. But it’s not. The first ingredient is soybean oil, followed by whole eggs and egg yolks. Only then does olive oil appear.

American ingredient labels are arranged in order of quantity. The earlier the ingredient appears in the list, the larger the proportion of the final product it comprises. Anyone who has ever made mayo knows that it’s almost all oil. Most mayo recipes do about a half cup of oil for every egg yolk. So if olive oil comes after eggs on the Spectrum mayo, you’re looking at a pittance of olive oil in the finished product. It’s soybean oil mayo.

Coincidentally, that’s one of the main reasons I started Primal Kitchen — to provide a beacon in the night for all the disaffected mayo (and other condiment) seekers sick of being ripped off with false promises of olive oil. As many of you know, I come up with most of my products to address a deficit or solve a problem in my own life. My reasoning is sound, I think: if I need something, others do, too. And I love mayo, but hated making it. Primal Kitchen™ Mayo is flying off the shelves, so I guess I was right.

I’m working through your program and have a question regarding the strength phase. I’m assuming that keeping heart rate below 75% does not apply since this is difficult to control. I use kettlebells for this, limiting to 20 minutes. However, they are demanding on the heart rate as are lifting heavy things.

Would a 20 minute kettlebell session with limited rest constitute a sprint session and hence substitute. Greatly appreciate your thoughts.

The hormonal response to kettlebell training is consistent with muscle adaptations to strength training.

Furthermore, weightlifters who incorporate kettlebells into their training enjoy additional strength and strength-endurance gains. It really can’t hurt (and may help) to add a KB workout once in awhile.

Many people find that regular KB swings improve and even eliminate back pain, and research into muscle loading and activation during the swing supports these anecdotes.

As for aerobic adaptations, KB training’s good for that, too. One study had female college soccer players do 20 minutes of KB snatches using 15 second work/rest intervals. Compared to a control group who performed only circuit weight training, the KB snatch group experienced gains in aerobic capacity over four weeks. Another study found KB training about as good for aerobic fitness as moderate-intensity uphill treadmill walking.

However, there are compromises. When you directly compare it to traditional strength training, kettlebell training doesn’t increase strength to the same extent. And compared to treadmill running, KB training doesn’t elicit as strong an aerobic adaptation. But it does produce gains in both areas.

It’s worth noting that most KB training studies use relatively low weights and still get good results for both strength and aerobic training. If you were to pick up a heavier bell — upwards of, say, 24 kg for women, 40 kg for men — you’d get even greater strength adaptations.

That’s it for this week, folks. Thanks for reading, and be sure to leave a comment down below. I’d love to hear your input on today’s questions.