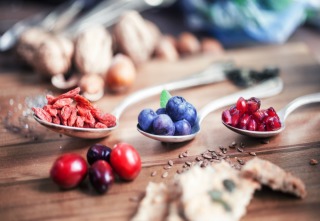 For today’s edition of Dear Mark, I’m addressing four questions and comments from readers. First up, do I subscribe to the idea of superfoods? If so, what do I like? If no, what do I consider “super”? Next, we know that plants—house plants, garden plants, trees—can absorb pollution and release stress-lowering odors. Is there an optimal arrangement of flora to achieve these goals? After that, I address a reader comment about the dangers of eating raw liver, followed by an intrepid reader who found the reference for the sunbathing testicle study from last week.

I would like to know what you think about super foods and/ or your favorite superfoods you use?

I don’t generally go for “superfoods.” The goji berries hand-picked by Tibetan lamas and placed in their armpits to salt-cure on a sweaty mountain ascent. The 110%-cacao cacao nibs, the raw maca root you gnaw and try to convince yourself is delicious, the heritage chia seeds cultivated from Moctezuma’s own personal stash.

It’s not that those foods don’t possess some interesting, helpful qualities. They’re generally very nutritious. But you’re not going to eat them that often (who else has a half dozen mostly-full bags of random Navitas Naturals produts in their pantry?), and eating them once in a blue moon won’t give you any superpowers.

I think many foods are super, though. Foods like wild salmon, egg yolks, liver, dark chocolate, purple potatoes, turmeric, fatty fish, aged cheese, various ferments are excellent “supplemental foods” (hat tip to Paul Jaminet)—foods with proven benefits and broad appeal in the kitchen. Even some common staples like garlic, onions, and ginger have incredible support in the scientific literature for their health benefits. These are the “superfoods” you should focus on because they’re time-tested, they’re easy to integrate into your diet, and they actually work. Don’t reject the goji berries and maca, mind you. Just don’t base your diet around them, and don’t think occasional consumption will supercharge your health.

Hi Mark, (not really nutrition, but paleo nonetheless) I would love your take on plants clearing pollution at home (and some details on the best combinations perhaps) and plants that give off plant odours that reduce stress.

This is a two parter. First, which plants reduce pollution?

The easy answer is: probably all of them. One way plants reduce pollution is by trapping it. I mean that quite literally. The major reason trees, grass, and other types of flora reduce airborne particulates is that the particulates attach themselves to the foliage. They become repositories for the pollution. This is different from metabolizing the pollution and rendering it inert. The pollution is still there. It’s just not getting to you.

A recent paper reviewed the determinants of how much particulate matter gets deposited:

When we’re talking about airborne chemicals like benzene, formaldehyde, trichloroethylene, xylene, toluene, and ammonia, certain plants actually filter them. Lucky for us, NASA did a comprehensive study to determine the specific detox abilities of various plants. Check the list and see what works for you.

As for the second question, once again, almost everything probably works.

The forest bathing research out of Japan suggests as much. Forest bathing lowers stress, reduces hypertension, improves immune function, and lowers blood sugar whether the forest is cedar, hiba, oak, or beech. And followup studies using cypress oil, cedar wood chips, cedar interior walls (which is relevant, as many Japanese homes are made of cedar) have all found similar effects. You could probably use a sack of cedar mulch from the nursery.

Those are trees, though. It’s not exactly feasible to grow a redwood or cedar tree in your house. What about house plants? This paper (PDF) found that geraniums, chrystanthemums, cyperus, and begonias were all potent sources of phytoncides—the stress-relieving plant odors. Other studies have shown that lavender and rosemary aroma can reduce cortisol and improve free radical scavenging, or that a combo of lavender, rosemary, clary sage, and peppermint aromas reduce perceived stress in university students.

The real key might be interacting with the plant—any plant. In one study, young adults found that simply transplanting house plants from one pot to another reduced physiological and subjective markers of stress by quieting the sympathetic nervous system.

Now, for some loose ends from last week.

Whenever the subject of raw liver consumption comes up, I want to shout THINK TWICE. I contracted campylobacteriosis from adding raw chicken liver to a smoothie. Yes, I’d been regularly consuming raw beef, lamb, and chicken liver for months with nothing but positive, energy-boosting results. Yes, I’d frozen this particular batch of fresh, localyl-sourced liver for a few weeks before consuming it, but this time, the bacteria survived the freeze. I, who hadn’t contracted so much as a cold in years, got very, very ill, and two courses of antibiotics were necessary to wipe out the infection. More than two years later, my digestion is still not 100 percent. Never again for me. Think twice.

It is indeed a risk. While deep freezing is pretty good at killing parasites in fish, it’s mostly ineffective against pathogenic bacteria like e. coli or salmonella. Those are hardy bacteria.

I’ve never had an issue with raw liver. Then again, I don’t eat raw liver on a regular basis (I prefer it cooked), and I get it from the same place each time (a source I trust). For what it’s worth, if I didn’t know the provenance of my liver, I wouldn’t eat it raw.

Here’s the study that you were looking for, Mark:
“Ultraviolet Irradiation and Sex Hormones in the Male” by Abraham Myerson and Rudolph Neustadt
Journal of Nervous & Mental Disease: February 1940 – Volume 91 – Issue 2 – p228

That’s the one. Thank you!

That’s it for today, everyone. Take care, let me know what you think down below, and thanks for reading!