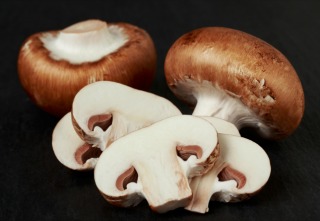 For today’s edition of Dear Mark, I’m answering three questions. First, are raw mushrooms safe to eat? Are there toxins? Are there any other issues to consider? Second, what’s the deal with Tom Brady’s diet and lifestyle? It seems healthy enough, but there are some unanswered questions, too. And finally, are there any other ways to get beta-glucans without eating mushrooms, yeast, or oats?

I love raw mushrooms, but I have also read that they should only be consumed cooked or they’re too harsh on the insides. Any truth to that?

Yet storage, including in the fridge or freezer, and cooking all reduce agaritine to a considerable degree.

Recall that a couple years ago, I wrote about the extensive benefits of eating mushrooms. That stands. They are incredibly healthy and helpful when people actually eat them the way people actually eat them. Maybe don’t eat them raw in large amounts. I find them uninteresting raw, anyway, unless it’s on a salad. Nothing like a pan full of sautéd mushrooms in a reduced Worscestershire sauce/soy sauce/gelatin/butter sauce.

The second biggest knock against raw mushrooms—after controlling for the poisonous varieties—is that they contain chitin, a type of fiber that makes up the cellular walls of funguses (plus many insects). As the story goes, “lots of people” don’t produce enough chitinase, the enzyme that digests chitin, to handle large numbers of raw mushrooms.

Is it true? I doubt it. In 2007, stomach assays of 25 Italian adults found that 20 of them produced chitinase. And the widespread consumption of chitin-rich insects throughout human history never would have occurred if they gave you crippling stomach pain each time you ate one. Crickets aren’t that good.

In fact, chitin supplements have shown to provide major benefits.

A little off-topic, I would be interested in Mark’s take on Tom Brady’s diet, which I was reading about just yesterday. He is very much a health nut, but his diet, although okay for what it is, seems far too limited to me.

I mentioned this diet in Weekend Link Love a couple months ago. It is an interesting one:

“80% of what they eat is…the freshest vegetables. If it’s not organic, I don’t use it.” Not much to complain about here. 80% is a little high, of course. And is 80% a precise number, or is it shorthand for “a lot”? Does it refer to % of caloric energy or % of volume on the plate?

“And whole grains: brown rice, quinoa, millet, beans.” This is the mystery line. So much to unpack. Beans, for one, aren’t grains. And is this category included in the vegetable category? Whole grains aren’t vegetables, clearly. Yet the next line confirms that “the other 20 percent” is meat and fish, so there’s nothing left over for the grains. Unless… has Brady cracked 100 percent? Do his go up to eleven? Although it wasn’t specified, I’m guessing he’s gluten-free. No one eats millet if they don’t have to.

“The other 20 percent is lean meats: grass-fed steak, duck every now and then, and chicken. As for fish, I mostly cook wild salmon.” Good stuff here. All delicious and nutritious. Duck is a strange one to just toss in there every once in awhile. I love duck. But rarely do I think to myself, “I could really go for some duck breast.” Plus, it’s far from lean.

No nightshades. That means no peppers, tomatoes, potatoes. Some people report sensitivity to the alkaloids in nightshades, though I’ve never seen definitive evidence. The most common complain seems to be joint pain (PubMed search autofills “nightshade arthritis” but doesn’t produce any good results).

“No white sugar. No white flour. No MSG.” No arguments. I’m not too worried about MSG, but then again, I don’t eat foods that contain it.

“I’ll use raw olive oil, but I only cook with coconut oil.” Standard advice that I’m not sure is right. Olive oil—even, or especially EVOO—is quite stable in the presence of heat. The antioxidants protect it (which is why EVOO is so stable) and even prevent the formation of trans fats.

“Fats like canola oil turn into trans fats.” Yes and no. While making baked goods with canola oil has negligible effects on trans-fat formation, high-heat cooking and frying with vegetable oils significantly increases the trans-fat content of the oils.

Brady goes way beyond diet. He’s made an entire lifestyle shift, including going to bed by 9 PM and avoiding parties and alcohol. He shies away from heavy lifting for fear of excessive “shortening” of the muscle, opting instead for flexibility, which he says “softens” and “lengthens” the muscles.

Whatever he’s doing works. Not every individual piece of his diet and lifestyle approach is optimal. But the stuff that works is enough to push him over the edge.

Unfortunately, I’m allergic to mushrooms. Any options for getting beta-glucans other than via oats or yeasts?

Kelp has a fair bit of beta-glucans. You could gnaw on dried kombu or use it in your cooking. Other, tougher seaweeds likely have it as well.

You could try a supplement, though most are sourced from baker’s yeast. If that’s an issue.

Thanks for reading, everyone. Take care and be sure to chime in down below if you have anything to add.