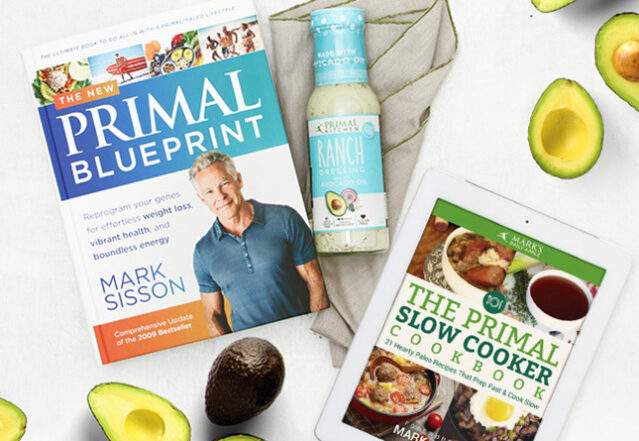 For today’s edition of Dear Mark, I’ll first be addressing questions from the comment section of the new Primal Blueprint edition announcement, plus one from the placebo post.

The first question comes from barry and concerns the omission of raw food on the new PB food pyramid. Did I make a mistake by not including overt recommendations for eating raw veggies and meat? Are cooked foods responsible for our health problems? After that, I field a brief question about non-running alternatives for the MAF method. And finally, I explore whether healthy living is all just one big placebo.

I love your dieting aspects as well, although, I haven’t heard you or anyone else really address the benefits of eating raw. The only people I can find that address this is the WAPF. I eat raw animal products daily and I was surprised to see this hasn’t really been discussed much. Raw meat, raw eggs, raw dairy, raw plants, etc. it’s all good for you. Humans are the only animal that cooks their food yet we’re the sickest.

Thanks for the kind words, barry.

I’m also supportive of raw egg yolks. Those fatty acids and cholesterol can be fragile, especially if they’re battery-raised, conventional eggs (pastured are more resistant to heat), and a good raw egg yolk is to be savored, in my opinion. I like them separated and dropped into smoothies, sauces, or blenders full of coffee, or consumed in the context of a sunnyside-up egg.

I eat a large bowl of mostly raw plants almost every day: my Big Ass Salad. While heartier greens like kale and chard are more digestible when cooked, I think there’s value in eating a mix of raw and cooked vegetables.

Raw meat can work, sure. Steak tartare, sashimi, poke, liver smoothies. Raw meat is quite digestible, but not uniquely so.

Humans are also the only animal to wield fire, wear clothing, participate in spiritual rituals, and—yes—cook. We are unique animals. And there’s considerable evidence that cooking increased the availability of calories, reduced the amount of labor and chewing required to obtain them, and triggered the brain growth spurt that enabled our ascension to the top of the food chain.

I’ve written about the potential dangers of the carcinogens and toxins that form during certain types of cooking. I’ve also discussed our likely adaptation to some amount of these toxins in our diet. There may even be hormetic benefits to occasionally consuming foods cooked at high heat.

I haven’t come across any quality evidence that cooked foods are major contributors to the degenerative diseases afflicting humans.

I just started looking into MAF, but I cannot run. I do a brisk walk on the treadmill. All the self testing seems to be aimed at runners. Not sure if I can accurately self test…

The MAF method works with anything. You can row, hike, bike, or swim. You can hop on the elliptical, the gazelle, the recumbent bike, or one of those weird vehicles that looks like an elliptical on wheels. Anything works. Just move.

If you can hit the numbers briskly walking, it will work.

So this primal lifestyle we’ve embraced … ?

We know that the placebo effect worms its way into everything we do.

When people are told they’re drinking a 620-calorie “indulgent” shake that’s actually just 300 calories, their postprandial ghrelin—a hormone that increases hunger and generally drops after large calorie intakes—plummets. As if the shake was indulgent and high in calories…

When non-exercising housekeepers are split into two groups—one group told their daily duties are a great way to exercise, the other told nothing—the “exercising” group loses weight and improves their blood pressure despite no change in activity levels.

I think it’s a case of placebo + real effect. This way of eating, living, and training really does work. Clinical trials (placebo-controlled ones!), anecdotes, and common sense confirm it. Food has hundreds of physiological effects. Exercise stresses the body and provokes an adaptive response. Sunlight does produce vitamin D, spending time in nature does reduce stress and boost immune function. These are all real things happening.

But belief in what you’re eating and doing has to have benefits. If believing a sugar pill can improve your IBS works, believing your salad is good for you probably has helpful effects above and beyond what’s actually in the salad.

Living a healthy Primal lifestyle physically and embracing it psychologically might just offer the best of both worlds. In my experience, real emotional investment makes living against the grain easier anyway.

That’s it for today, folks.

I’d love to hear your thoughts down below. Take care!