Dear Mark: Erythritol and Weight Gain, Chicken Liver and Arsenic, and Tips for Laptops in the Sun 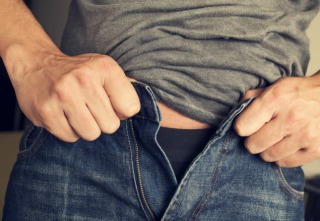 For today’s edition of Dear Mark, I’m answering three questions from readers. First, is erythritol, one of the more common sugar alcohols, linked to weight gain? According to a new study, it is. What should we make of the research? Next, I talk a good game about chicken livers, but there’s a new study that seems to show they’re big repositories of arsenic. Should you stop eating chicken liver? And finally, I give a few tips for improving screen clarity when working outside on your laptop in full sun.

Mark, what’s your take on this new report that erythritol is associated with weight gain? I’ve been eating chocolate sweetened with it but am unsure I should keep eating…

It’s a confusing report that gives the impression the more erythritol a person eats, the more weight they gain. They refer to erythritol as a “common sweetener” used by people trying to lose weight. “may actually have the opposite effect.” They discuss how it’s naturally found in fruits like watermelon and pears, and is added to stevia in the product Truvia. All in all, the implication is that using erythritol “may actually have the opposite effect”—it might make you gain weight.

But then the real story comes out: Erythritol is just a biomarker associated with weight gain.

Okay, so maybe high erythritol levels indicate an increased intake of diet foods, and these are just people trying and failing to lose weight. Then you look at the actual paper, and you realize that the authors have identified a previously-unknown pathway for endogenous synthesis of erythritol in humans. This is truly landmark. The prior consensus was that humans don’t make erythritol in the body.

Well, the pathway they identified is a glucose-to-erythritol conversion. That’s all we know. The people who gained the most weight were converting glucose to erythritol more than anyone else.

My guess—and it’s just that, a guess—is that these people were also eating the most glucose. I mean, glucose consumption is a fairly well-established risk factor for weight gain in the average sedentary human. It wouldn’t surprise me if college freshman who ate the most glucose also gained the most weight. It’s not like college freshman don’t gain weight. Most do, and those who do gain almost 8 pounds.

Another piece of evidence in favor of carbs and carb intolerance being the issue is that the students with the highest erythritol levels also had higher blood glucose levels at the start of the study.

I just saw this study about arsenic in chicken livers. Since you seem to be a big fan of chicken liver, I thought I’d ask your opinion. Should we stop eating them?

Yes, I am a fan of chicken liver. They’re mild (especially the pastured ones). They’re lower in vitamin A than ruminant liver, so you can eat them more often without overdoing it. They’re higher in iron, if that’s a problem for you. They’re also a rich source of folate, perhaps the richest. Chicken liver is a good introductory organ meat.

I am not a fan of arsenic.

The arsenic in these chicken livers was actually an arsenic metabolite—something that the body converts arsenic into. They were getting it from an infamous growth promoter called 3-nitro-4-hydroxyphenylarsonic acid, or roxarsone, which is an organoarsenic compound. The chicken eats roxarsone, it gains weight more efficiently, but it also produces a ton of arsenic metabolites and lodges them in its liver.

I have good news for people who eat chicken raised in the European Union (as of 1999) or North America (as of 2013): chickens raised in those countries aren’t allowed to eat roxarsone. The chicken livers in the study came from chickens raised in China, where roxarsone is still used. Good quality pastured chicken from the EU or NA should be completely safe.

The Wiley press release about the study has a hilarious title, by the way: “Poultry Feed with Arsenic More Problematic Than Assumed?”

Anyone have solutions for laptop work outside? I’d love to work outside more, but the sunlight makes screens impossible to read.

Make shade. A beach umbrella is an easy option. Or even a regular rain umbrella held up between a couple rocks, positioned just so. Costco sells a good pop-up tent for a reasonable price, although you couldn’t stand and work under it. There’s also the laptop hood.

Find shade. I do most of my outside work under cover. Usually in my backyard with a canopy, but occasionally out in a park or forest under trees. For one it keeps the heat off you and your computer, thus extending the time you can spend working. If you’ve got any kind of tree cover nearby, go for that. You might have to drive an extra 10-15 minutes to get there, but that’s a small price to pay for the comfort and stimulation of working outside with perfect clarity.

Use an anti-glare screen protector. There are several available on Amazon. Read the reviews, as they seem mixed.

Invert colors. If you’re working only with text, inverting the colors—white text on black background—can help you see more clearly in sunlight. This obviously won’t work for graphic designers or anyone requiring full visual fidelity.

Increase contrast. Increasing the contrast on your monitor can also improve clarity in full sun.

Become one with your laptop. Eventually, we’ll all enjoy (or “enjoy”) direct neural links to our devices without physical interaction. We’ll “type” emails or “write” code without lifting a finger. A thought is all we’ll need. Everything will take place in our heads and, maybe, behind our eyes. Hell, if they can connect directly to our visual cortex, maybe our eyes will become vestigial organs. One can only hope!

Until that day comes, you can wear the laptop compubody sock. Just try not to do so within 500 meters of a school.

For anyone intrigued by outdoor laptop work but unsure of the benefits, check out this older post I wrote on the topic. Long story short is that it’s really, really beneficial for you. I may write more on this in the future.

That’s it for this week, folks. Thanks for reading, and I’d love to hear your take on the questions and answers in today’s Dear Mark. Take care!