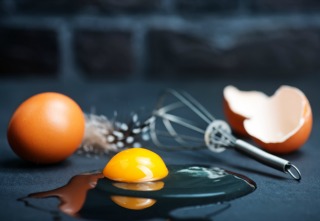 For today’s edition of Dear Mark, I’m answering four questions. First, I give a few options for recreating, or at least approximating the emulsification power of the mighty egg yolk for a reader who’s allergic (and give a quick preview of an upcoming Primal Kitchen product). Next, I explain why people with sleep apnea often grind their teeth, and mention an nutritional factor that might also cause grinding. Third, can you ferment frozen vegetables? Should you ferment frozen vegetables? And fourth, is fermented food safe while breastfeeding?

I just took the plunge at New Year’s after following your blog for a while now. My question is that I’m allergic to eggs. I work around that for breakfast, but I’m wondering what to do about actual recipe substitutes when eggs are called for. What’s a good Primal option?

The most important part of the egg is the yolk, and the most important   culinary application of the yolk is emulsification. Egg yolks contain lecithin, an amphiphilic substance that attracts both water and fat, which allows emulsions to form. Luckily, there are others.

Mustard. A great salad dressing emulsifier is a teaspoon of dijon mustard whisked into the mix.

Garlic. Smash garlic into a paste, add some olive oil, and whisk it all together until it emulsifies. Unfortunately, the emulsion doesn’t last very long.

Black garlic. Black garlic is one my newest discoveries. The product of several weeks of slow and low heating, black garlic is exactly that: garlic with so thorough a Maillard reaction that it’s turned black as coal. Only instead of tasting like burnt garlic, black garlic tastes sweet, mild, and almost balsamic vinegar-esque. It’s also smooth and creamy, which makes it perfect for emulsions.

Except for the lecithin, none of those really work for mayo, though. You can make some delicious stuff, but mayo eludes. Luckily, in the coming weeks I’ll be releasing a brand-new Primal mayonnaise with a twist: It’s egg-free. It’s totally free of allergens, in fact. Stay tuned for that.

Curious to know Mark’s thoughts on bruxism, or teeth clenching / grinding. The newish school of thought is that it is a sign of sleep apnea. I can’t quite get my head around why clenching or grinding one’s teeth at night, especially to such an extent, would be a way to open up the airways.

Try it for yourself. Breathing normally with relaxed jaws, tilt your head back until your airway starts closing and your breath begins resembling a snore. Now clench. Bite down hard. Notice how much easier the breathing gets? You’ve just opened your airway back up.

Clenching may also indicate magnesium deficiency. As far back as the 1970s, clinicians have been reporting connections between magnesium levels and bruxism. One French doctor even found that magnesium supplementation “nearly always” resolved bruxism.

Hey there. I’d really like to try fermenting, but many vegetables I can’t buy fresh. Is it possible to ferment flash-frozen veggies (green beans for example). Will they still be as nutritive?

Also, I’m breastfeeding a newborn. Are ferments possibly dangerous in any way for my newborn?

First, freezing bursts the cell walls of many vegetables. The water expands, rupturing the stability and integrity. I suppose the resultant mush could be fermented, but it wouldn’t be very appetizing.

Second, freezing kills or deactivates a lot of surface bacteria, which you need for proper ferments. Making sauerkraut out of cabbage, for example, utilizes the native bacteria present on the fresh leaves. Freezing cabbage would hamper the viability of the bacteria.

It’s probably possible to use a fermentation starter, like kraut juice, to ferment frozen veggies, but, again, it might get a little weird texture- and taste-wise.

The majority of probiotic/baby research focuses on probiotics in formula. We don’t have a ton of research on breastfeeding’s interaction with sauerkraut, yogurt, kimchi, pickles, or kombucha, but we do have a fair amount of research on supplemental probiotic usage—which is basically a more extreme, concentrated version of fermented food. If probiotics are safe and helpful, fermented food shouldn’t be a problem For the most part, fermented food is a safe addition to a nursing diet that could even be helpful.

When mothers drink milk fermented with L casei (a strain found in most kefirs) while pregnant and breastfeeding, their nursing babies experience fewer GI disturbances.

It’s not only good for the baby drinking the milk. Probiotics may even help prevent mastitis, or infection of the milk ducts. Left untreated, mastitis can lead to terrible outcomes, like abscesses, impaired milk production, and even breast surgery. You don’t want to get it. In one study, taking probiotic bacteria isolated from breast milk actually outperformed antibiotics in the treatment of infectious mastitis. It also prevented the reoccurrence of mastitis, which is quite common. A later study using the same strain derived from breast milk—L. fermentum—found that it reduced breast pain during nursing (a potential harbinger of mastitis).

In a study of the diets of Japanese mothers and their effects on the women’s breastfeeding babies, researchers determined that yogurt, cheese, miso, bread, soy sauce, fermented soybeans, and tree nuts were common aggravators of atopic dermatitis in the kids. I’m not sure you can pin this on fermentation, however. It could be a dairy, soy, wheat, and nut protein issue, too.

Kombucha could be problematic. A kombucha SCOBY is by its very nature an unwieldy, diverse motley crew of competing interests maintaining a tenuous coalition just so long as there’s plenty of sugar for everyone. Don’t go drinking moldy kombucha. If you’re brewing it at home, be sure you know what you’re doing, how to distinguish between mold and normal growth. The longer it’s active on the same batch of tea, the higher the alcohol content. And black tea kombucha will contain some residual caffeine, which most people don’t want their babies consuming.

Thanks for reading, everyone. I hope these answers help, and if you have anything to add, do so down below!