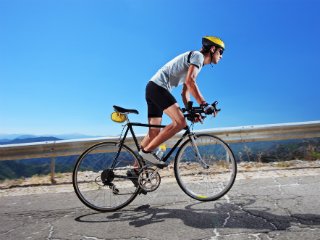 For today’s edition of Dear Mark, I’m answering three questions about training. First, why might cycling feel harder than running at the same heart rate, and what should be done about it? Second, is it safe or smart for a footballer to try to become a fat-burning beast when he’s currently in-season? Are there lessons can we draw from athletes who have given it a shot?

And finally, what do I think about the relatively new Orange Theory gyms that have arrived on the fitness scene? Are they good, bad, or both?

I was wondering if you could answer this (or maybe answer in a blog post). I got a copy of primal endurance a couple of months ago and love it, great book. I’ve been running using Dr Maffetone 180 formula for a fair while (with good results whilst running), I also use the formula whilst hiking on trails and using gym equipment like the eliptical trainer. However I used to do a lot of cycling years ago and recently bought a bike as a different form of training for days when I don’t want to run/hike or use the gym. However when I use the 180 for cycling it feels A LOT more difficult for the same HR – 130 on the bike feels like 150 running for example. High 140s/low 150s – quads are burning whereas running at that same rate feels easy. Also my HR jumps around so much more whilst on the bike compared to other forms of training – I know this is most likely due to traffic, hills, bike handling on different surfaces etc.

Back in the day, I always dropped 10 beats on the bike to get the same “effort” I got running. That’s when I was pushing myself and, quite frankly, breaking my body down.

For Primal Endurance, you use the same heart rate whatever exercise you are doing. Swimming being so easy on the body for example, you can bang out intervals working really hard at the maximum aerobic heart rate. When you swim, the water keeps you cool, supports your body weight, and reduces impact. Whereas with running you are just jogging to get that same heart rate. This just reveals that due to the weight bearing, temperature elevating, overall difficult nature of running or cycling in comparison to swimming, the sensations of effort/degree of perceived difficulty are different. In terms of recovery, you recover the same from a casual jog as you would from a festive interval workout in the pool because the latter is so much “easier.”

On a related note, the question often comes up about being allowed to bump up your aerobic limit number as you get in better shape. This is exactly what you shouldn’t do. Going faster and longer at the same heart rate and perceived effort means you’re improving your fitness in a safe, effective way. You don’t need to push it.

And of course, we all have disparate fitness levels in different activities. Cycling, especially if you’re a little rusty, very well may be harder because you haven’t kept up with it. We all have strengths and weaknesses. Your perceived exertion will vary but you still honor the heart rate limits.

Will keep this short. I play Australian football (afl). It’s a 2 hour sport each week plus training. During the game I clock up between 13-18km and it affects both aerobic and anaerobic systems. Lots of stop start play. Tackling, falling down, getting up sprinting, jogging etc
I really want to try your eating methods but don’t want to lose energy in the transition. Do you think I should wait to post football season to convert or is it possible to change to the high fat diet and continue to have a high output?

Your instinct is correct: wait for the season to end before you switch over to an entirely new way of obtaining energy.

You can’t go from being a sugar-burner to a fat-burner right away without losing a little something. You need to build the metabolic machinery to support the new diet. That takes time. We’re always burning both fat and sugar, of course—it’s not all or nothing. When I say sugar burner, I mean someone who relies on exogenous glucose for the majority of their energy. I mean a person who needs a steady infusion of sugar every couple hours. I mean someone who gets ravenously hungry in between meals, someone who cannot reliably utilize enough of their body fat to provide energy between meals. They still burn fat, just not well enough to get off the carbs.

Football, like you say, is both anaerobic and aerobic. You’re burning massive amounts of glycogen. That means you can probably get away with cycling between high-fat and higher-carbs after particularly grueling sessions. But increasing your ability to burn fat and decreasing your reliance on glycogen during training will improve both high intensity output and lower intensity output. You can still go fast and hard. You’ll just be able to conserve glycogen for the times you truly need it.

The good news is that eating and training this way can pay huge dividends provided you allow enough time for the switch. Lebron didn’t. When Lebron James went low-carb paleo a couple years back toward the end of the season, he chose the wrong time to do it. It was the back end of the season, when energy is lowest and wear-and-tear is highest. His energy and performance suffered. Don’t make that mistake.

I was wondering if you had an opinion on this latest cardio craze, and if you could explain this “Orange Zone”, as it appears to line up right with the “Black Hole” in your latest book, Primal Endurance.

I like that they’re doing high intensity intervals. Those are really effective. They offer great bang for the buck, and there’s considerable evidence they work better than the standard “cardio.”

I like that they bathe their trainees in soft orange light. One big problem with training at the gym at night is it ruins your circadian rhythm. The music’s blaring, the TVs are going, the fluorescent white light is burning into your soul and delaying your melatonin secretion. Using orange light mitigates the problem of night time gym visits.

I like that they’re full body workouts. It goes without saying that using your entire body is a better use of time than using a single body part.

I don’t like the monotony of the intensity. You need more than just high intensity all the time. One woman profiled in the Wall Street Journal found herself attending classes five days a week on top of running and Bikram yoga. She’s obviously an adrenaline junkie, the kind who has to go-go-go and end up a puddle of sweat or else feel like the workout was pointless. Orange Theory may attract and enable and encourage this demographic when really they should be slowing things down and using intensity intermittently, not chronically.

Honestly, it sounds a lot like basic circuit training or those boot camp groups you see in the park that focus on making folks “feel” like they got a great workout. Lots of movements, not a ton of reason behind them. I don’t see people getting markedly stronger doing only this.

The Orange Zone is a cool place to visit occasionally, but not everyday. That’s a recipe for burnout. Now, people can become addicted to the high intensity zone and feel like it’s working. And on some level, it is. It’s better than doing nothing. It will get you “fit.” But months, maybe years down the line, you’ll realize that you should have taken a more balanced approach.

That’s it for today, folks. Take care and be sure to chime in with your thoughts and advice below!