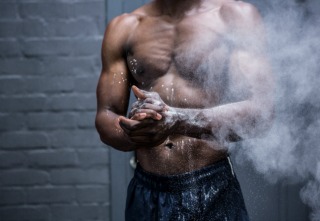 By now, you know that CrossFit and Primal are totally compatible. You can get enough carbs, calories, and micronutrients eating this way. The specific foods we recommend support healthy recovery, injury prevention, tissue health, ample energy reserves, and even longevity. The lifestyle recommendations—the Primal Laws—provide extra advantages most “diets” completely ignore. And the focus on fat-adaptation buttresses an energy system many athletes lack. All in all, Primal is a great choice for any CrossFitter.

But one final question remains: Can it support and enable elite performance?

Most of my previous posts in the series answer this question, at least partly.

We now know that there’s nothing stopping someone from eating enough calories and carbs on Primal to support CrossFit training. It may be a bit easier to obtain carbs and calories from a pint of ice cream and garlic bread than from a big baked potato and fried plantain—but not by much. And we’re all adults here. We should be able to eat the healthy whole foods without complaining.

We know that the specific foods and lifestyle interventions Primal recommends can help athletes gain strength and build muscle, thereby improving a major determinant of a CrossFitter’s success.

We know that the macros are important, which is why many CrossFitters focus entirely on the macros, but that misses a major aspect of Primal performance benefits: the micronutrients. What’s great is that alongside all those Primal whole food carbs, protein, and calories you get actual micronutrients that make your body run better.

I’m a big picture guy. I designed the Primal Blueprint to be a simple path to better health, something that Grandma and Grandpa could figure out without having to subscribe to an RSS feed or learn how to read a PubMed abstract. Something you could explain on an elevator ride.

But I also like the weeds, the nitty gritty details, the nerdy stuff. So do many of my readers. They aren’t exactly necessary for basic good health, body composition, and fitness, but they do provide an edge to people who want to really excel. Especially CrossFit athletes.

At the top, the little things really matter. Tia Toomey won the the title of Fittest on Earth literally by a hair. In the last workout to determine the winner she was beaten by her countrywoman Kara Webb. But Tia took the title because she was more consistent and performed just THAT much better over the entire Games. Then you’ve got Matt Fraser who completely ran away with the title yet again. He is so far superior because he doesn’t compromise and takes no chances. He eats paleo. These elite athletes don’t take any chances with their nutrition. They understand that macros are only part of the story. The athlete that stops there is destined to limit his or her potential.

You’ve got to get into the weeds like Fraser and Toomey did, and I’ve got three areas that most CrossFitters completely miss if they take an “if it fits my macros” approach:

As CrossFitters purportedly engaged in physically-demanding activity on a regular basis, you have more protection against excess omega-6 than most. You’re burning more than you’re storing. But you’re still incorporating all those omega-6 fatty acids into your cellular and mitochondrial membranes. The mitochondria are especially critical for a CrossFit athlete because they’re the power plants of our cells, turning incoming calories into the ATP that makes squatting, running, jumping, throwing, and moving one’s body through space and time possible. Mitochondria with too much linoleic acid (the primary omega-6 fat in the food system) are bad, leaky, oxidative stress-prone power plants.

To avoid excessive omega-6 intake, watch out for foods that contain or are cooked in processed seed oils like soybean oil, canola oil, sunflower/safflower oil, or grapeseed oil. Whole foods sources of omega-6, like nuts and seeds, usually don’t cause problems as long as you avoid the processed, refined, concentrated oils.

Fiber is fiber, in most people’s minds. It “provides colonic bulk.” It “absorbs cholesterol.” It enables bowl-shattering bowel movements. It’s “good,” for some reason. For many years, I’ve talked about the importance of the gut bacteria we carry. Well, those critters need food. They need to eat, and prebiotic fiber is the best food source for them.

When you feed your gut bacteria, they prosper and do good things for you. They produce steroid hormones like testosterone. They convert anti-nutrients into micronutrients. They reduce inflammation, shore up leaky guts, and improve your nutrient absorption. These are all important for athletes looking to maximize performance.

CrossFit hits every energy system hard, yet the majority of athletes who haven’t taken the time to get fat-adapted are squandering a ton of potential energy. I’m not saying you can win the CrossFit games on a zero-carb diet. I’m saying that taking 4-6 weeks to get fat-adapted before resuming carb cycling can improve your metabolic flexibility—your ability to maximize fat burning before switching over to glucose.

Take Dr. Peter Attia’s experience training in a totally fat-adapted state. At an intensity where most people would be burning pure glycogen, Attia was still burning about 30% fat. And that was on a fully ketogenic diet almost bereft of carbs. If you cycle in some carbs when needed, you can retain the fat-burning ability while having plenty of glycogen for maximal efforts.

Do be advised: As you transition into fat-adaptation, expect your WODs to totally suck. This is normal. This is fine. Just ride it out. The end result is worth it.

Primal isn’t magic. Nothing is. It won’t turn you into a genetic uberman/woman. At some level, we must acknowledge the role of genetics in truly elite physical performance. Michael Jordan isn’t Michael Jordan only because he practiced and worked hard. He’s Michael Jordan because he combined elite genetics with hard work and practice. The same goes for any of the top CrossFit games competitors. They are the products of great genes and smart training.

But Primal will help you reach your greatest potential.

When it comes down to it, any elite athlete should expect that eating healthier foods, getting more sleep, reducing systemic inflammation, improving connective tissue health, getting fat-adapted, and maximizing nutrient density without sacrificing carbs or overall calories will improve performance. At the very least, it won’t hurt. It can’t.

What do you think? Thanks for reading, everyone.