Dear Mark: CrossFit and Carbs; How to Lose Weight as a Teen 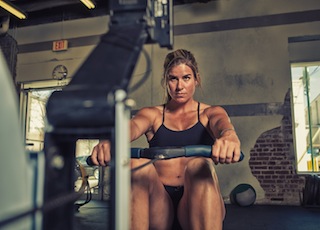 For today’s edition of Dear Mark, we’ve got two questions. First, I handle one from Heidi, a full-time CrossFitter with low body fat, a love for carbs, and a desire to burn more fat than sugar. Find out whether her love of CrossFit is compatible with her desire to stick to a low carb Primal way of eating. Next, I cover a question from Sam, a 14-year old teen who wants to drop about 15 to 20 pounds. He’s currently eating Primally and following the P90x routine, but is there another, perhaps better way?

I just recently joined your subscriber list and downloaded your ebooks. I have a question regarding the transition from burning carbs to burning fats.

First a little background: I am a 40-year-old woman who has been pretty active her entire life. I have been doing CrossFit for the past two years and really enjoy the intensity. I am 6 foot tall and 150 pounds. And last I checked my body fat percentage is about 14%.

I absolutely love carbs and figure that my body is addicted to carbohydrates and uses them for fuel. Last year I tried the paleo diet and after about 10 days I got extremely sick. I had a severe migraine and could not function and craved carbohydrates uncontrollably.

What is your suggestion for helping my body make the transition to burning fat versus carbs? And how long do you think that would take?

I respect the information that you are providing and look forward to your response!

Glad to have you aboard! Thanks for following.

CrossFit is a notorious carb-burning modality. That’s fine, but it’ll be hard to maintain a very low carb or ketogenic diet while engaging in near-daily CrossFit workouts. That’s just the nature of the beast. Sometimes, carb cravings should be heeded. Sometimes, you just need more glucose. This sounds like one of those times. Cravings aren’t always an example of your body sending unreliable signals. I’ve always said that eating some carbohydrate after a high-intensity, glycogen-depleting workout (like a CrossFit WOD) is the best time to eat it. You’re more likely to fill glycogen reserves that way and your muscles are insulin sensitive and thus require less to do the job. Exercise even up-regulates something called non-insulin dependent glucose uptake, a glycogen-repletion pathway that allows carbohydrate utilization without any insulin at all.

However, there’s emerging evidence that given adequate adaptation time to a ketogenic diet, you can maintain or even improve power and strength output. For instance, there was the group of trained gymnasts who lost body fat and maintained or even improved their strength levels (hanging leg raise, pushup, dip, pullup, squat jump, countermovement jump, and continuous 30 second jump were all tested) on a zero carb, meat/fish/olive oil/green vegetable-based ketogenic diet. They were given a full thirty days to adapt. Most people don’t give themselves an entire month before declaring a diet useless or dangerous or bad for physical performance, but this study suggests that they should.

There’s also the cyclic ketogenic approach, where you eat lower carb most of the time but load up on Primal safe starches and fruit post workout. And by “load up,” I don’t mean the 400-500 gram carb fests that people embark upon after doing yoga for 45 minutes. Try to find your minimum effective dose of carb repletion. 200-250 grams should be plenty for most CrossFitters on a WOD day. Start at 200 and see if you need more – or less.

Also, you might consider increasing your body fat percentage. That’s a low enough percentage that many, if not most, women in that range begin feeling and seeing negative symptoms, including carbohydrate cravings and low leptin levels. Remember that body fat secretes leptin, a satiety-promoting hormone. Ample leptin (and good leptin sensitivity) is an indicator of adequate energy availability to the body. Low leptin (caused by inadequate body fat stores) indicates inadequate energy availability to the body; food cravings are a natural response.

If you’re balking at increasing body fat, 14% is very low body fat for many women and looks quite different than 14% on a man. This isn’t scientific, but here’s a picture showing what 15% actually looks like on a woman; here’s one showing 15% on a man. Consider shooting for 20-30% body fat levels. That sounds like a lot to you, I’m sure, but you might feel better with fewer cravings. Here, take a look at what those levels look like on a woman. You obviously know how to get back down to 14%, so if the higher levels don’t work for you, you can always cut down. It’s worth a try to see if your cravings subside and performance maintains.

Bottom line, though: if you want to become more of a fat burner, you have to cut back on the exercise because the CrossFit is exhausting your glycogen stores and demanding that they be replenished with more carbs. In most people, fat simply can’t support that level and volume of intensity. That’s okay, if that’s what you’re going for, but I suspect you’d be happier and overall healthier if you toned down the workouts, kept the bulk of your carb intake on workout days, and did a lot more easy, slow movement – walks, hikes, even pure strength training, as opposed to 30-minute WODs, are more conducive to fat-burning. Don’t give up CrossFit. Don’t give up the WODs. Just do it differently (maybe your box has a strength training or Olympic lifting-focused day that you can try out instead of the metcons for a change).

I am a 14 year old boy that is 15 to 20 pounds overweight and I am doing the Primal Blueprint diet and doing the P90X program 5 to 6 days a week. I only do 30 to 40 minutes of each video and I do abs every day. I was just wondering if you had an estimate for the time it would take for me to get in as good shape as an average high school boy my age.

Well, seeing as how about 21% of teens aged 12-19 are obese (as of 2012) and even more are “just” overweight, I’d say you’re doing better than the average high school boy. The fact that you’re reading this blog, asking questions, and going forward with an exercise plan of your own puts you in rarefied territory. Hats off to you, Sam. It’s a great start.

You’re probably about to start full blown puberty. That’s where your voice deepens, you get some sweet body hair (if you’re genetically inclined to grow body hair), and, most importantly for your situation, your testosterone levels skyrocket. Thanks to the testosterone boost, it’s also where pudgier preteens begin to lean out and build more lean mass. This happens without you doing anything in particular. It’s purely hormonal; your body is just following the script. If you’re eating well and exercising, the effects will be even more pronounced. I suspect you haven’t hit your testosterone phase.

If I were you, I would make a few changes to my workout routine. P90x is great at improving endurance, cutting fat, and increasing your pain threshold, but it’s not amazing at building lean muscle. Instead of 5-6 days a week, try 2-3. And cool out on the abs. You don’t need to do them every single day, and the heavy emphasis on sit-ups and crunches can negatively affect the stability and health of your spine, especially when you’re 20 minutes into your fourth straight day and your form goes out the window. Planks, hanging leg raises, ab rollouts, and even squats and deadlifts are excellent ways to strengthen your torso (or “abs”) without the volume of P90x.

Lift some actual weights, if you have access. Although people will tell you differently, no research has ever shown that weight training actually stunts growth in youth. Kids who lift enjoy stronger bones (which extends into adulthood), increased lean mass, improved insulin sensitivity (which will help you lose body fat), and overall better health – just like adults who lift. Lifting heavy things will also build some nice stuff to be revealed once you lose the body fat.

Primal Blueprint Fitness, primarily a bodyweight program that can be modified to include weights, is a great place to start. Plus, it’s free if you sign up for the newsletter (which is also free).

There’s also non-workout stuff you can do. You’re 14, which makes you an incoming freshman, right? How about going out for a sports team? If you don’t feel up to it (high school can be intimidating, especially if you don’t feel you’re at your physical best), you can always play on the side and then come back next year ready to dominate. Consider non-traditional sports, like Ultimate Frisbee, swimming, or maybe lacrosse. They’ll get you really fit without the level of scrutiny applied to basketball, football, and baseball.

You should try active commuting to school, if it’s feasible for you. Walk or bike to school instead of taking the bus or getting a ride. Remember, attaining and maintaining optimal weight is much more about integrating constant physical activity throughout the day, rather than focusing on punctuated bursts of intense activity. Since you’re probably sitting down for most of school, walking/biking to and from campus can really help mitigate all the inactivity. Throw a few workouts in a week, some play/sports, a weekend hike or two, and you’ll be in great shape.

Let me know how it works out for you, Sam.

That’s it for today, folks. Thanks for reading and be sure to chime in with your words of advice or encouragement for Heidi and Sam (and anyone else who might be in a similar position)!