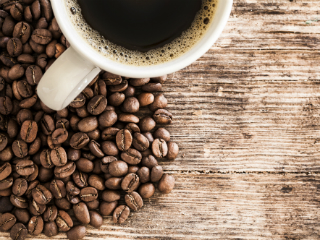 Last week’s post on coffee generated lots of questions. Today’s Dear Mark will answer some of them. First up is a two parter exploring whether L-theanine can make coffee work even better than it already does and if pre-ground coffee beans are lacking in the polyphenol content. Second, is coffee bad for your bones? It’s “common knowledge” that caffeine leaches calcium and inhibits absorption of it, but how true are the claims? And finally, caffeine can increase insulin resistance. What about coffee? Is this a problem for people following the Primal eating plan?

Mark, I have a few questions because I’ve been waiting for a definitive guide to coffee. First, about the cortisol, I was wondering if supplementing l-theanine would reduce the negative stress inducing effects the caffeine has similar to how a cup of green tea acts? Second, I’ve read from many different sites that pre-ground coffee has a substantial reduced amount of antioxidants compared to freshly ground beans. Also, thanks for the info on inorganic coffee. I had a friend tell me only buy organic because of the pesticide residue content.

1. Many in the nootropics community take it alongside their coffee (or caffeine powder). There’s a fair amount of research into the combination.

50 mg of caffeine with 100 mg of L-theanine improved performance in an attention-switching task and reduced susceptibility to distracting stimuli.

If caffeine raises your blood pressure, L-theanine blunts the effect.

L-theanine had no effect on the caffeine-mediated increase in vigilance on a task requiring sustained attention.

L-theanine inhibited the vasoconstrictive effects of caffeine in one recent study, but also eradicated the positive mood changes.

L-theanine may be a good addition to coffee, depending on what you’re trying to do. For focusing on the task at hand and getting things done, coffee with L-theanine might be the ticket. For people who get the jitters and the shakes from coffee, add a little L-theanine. If you’re looking for the mood effects of caffeine—that dose of “productive optimism” that makes idea generation run smoothly—you may prefer coffee alone.

As always, your mileage will vary. Try it out—a cup of strong green tea is a good source of L-theanine, and L-theanine supplements exist for relatively cheap—and see how it affects your coffee high. It’s not going to do any damage, and even if you don’t end up using it with coffee, L-theanine is a good thing to have around for general anxiety and stress.

2. Yes, this is partially true. Polyphenols exist not to provide health benefits to us (although it’s a nice side effect) but to protect the plant from oxidative stress. Just as light and heat exposure degrades the polyphenol content of extra virgin olive oil, rupturing the cell walls of a coffee bean and increasing the surface area exposed to the elements through grinding degrades its polyphenol content. It’s not actively bad for you. It’s just probably not as good. Nor does it taste as good.

I enjoyed your article on coffee, however I would like to know what the correlation is between caffeinated coffee and calcium intake or even if there is one. A number of years ago I had a serious spiral fracture to my leg and my doctor told me not to consume caffeine as is inhibited calcium from being absorbed by the bones. Any truth to this?
Thanks
Leslie Stevens

Thanks for the kind words, Leslie. I’m glad you liked the post.

Luckily for you, this claim appears to be over hyped if not altogether incorrect. Just like the popular notion of animal protein leaching calcium from your skeleton and turning your blood into bone broth, the reverse may even be true: coffee consumption has even been linked to lower rates of osteoporosis and improved bone mineral density.

Overall, observational (correlational) studies find a small link between coffee consumption and fracture risk in women. They find the opposite in men: coffee intake is protective against fractures.

A controlled trial in healthy premenopausal women found that 400 mg of caffeine a day had no significant effects on calcium economy, including urinary calcium, fecal calcium, or calcium absorption. There were slight decreases in bone resorption (transfer of calcium from bone to blood), bone accretion (transfer of calcium from blood to bone), and calcium pool turnover (less activity in the bone all around).

In Swedish women, high coffee consumption is linked to a minor reduction in bone mineral density (3-4%) but not increased fracture risk. This relationship was strongest in women who consume less than 700 mg of calcium a day, who did have an increased risk of fracture.

In premenopausal Korean women, coffee intake has no correlation to bone mineral density.

Caffeine has a very slight inhibitory effect on calcium absorption. It’s so slight that a mere tablespoon or two of milk provides enough calcium to make up for any calcium lost to your daily coffee.

What else could explain a damaging relationship?

High caffeine intake is very often a marker for low calcium intake. The more coffee (and energy drinks) a person consumes, the less dairy (the most common source of calcium in Western diets) they tend to consume. A low calcium intake exacerbates the otherwise minor effect caffeine has on calcium economy.

High coffee intake can be a marker for poor sleep. Sleep loss is strongly linked to bone loss. Caffeine not only affects sleep when taken late in the day, it’s frequently used by people who sleep poorly and need it to stay awake and alert.

That said, limiting coffee (and caffeine) while healing from a fracture may be prudent. Animal studies indicate that caffeine has a direct effect on the bone healing process, when even small perturbations to calcium economy are significant.

So while you shouldn’t adopt a pot a day habit while recovering from bone injuries, healthy people shouldn’t be too concerned. If you do drink a lot of coffee, make sure you’re eating enough calcium (and protein, and vitamin D, and vitamin K2, and collagen, and lifting heavy things, and all the other things that determine bone health).

In a previous post, I believe it was a “Dear Mark,” you mentioned that coffee could temporarily increase insulin resistance, which makes that fact that many on a SAD diet pair coffee with a pasty especially bad.. Is it coffee specifically, or caffeine that triggers insulin resistance?

Caffeine is “worse” than coffee, to be sure. Coffee has protective polyphenols, like chlorogenic acid, with proven benefits on insulin sensitivity. Caffeine does not.

Another study found that low-energy diets either high in coffee or low in coffee led to similar improvements in insulin sensitivity.

And still another study, this one a controlled trial, gave type 2 diabetics (some of the most insulin resistant folks around) 5 cups of coffee every day. Although 8 weeks weren’t enough to see any changes to insulin sensitivity, their liver function—a likely harbinger of insulin sensitivity—did improve.

You read the post from several years ago, so you know that the increase in insulin resistance sometimes caused by coffee/caffeine is entirely physiological: coffee increases adrenaline, which releases stored fat, and we need to be a little insulin resistant to burn that fat effectively.

Of course, this means that a big mug of coffee alongside a plate of pancakes isn’t a great idea. But most of my readers aren’t eating big plates of pancakes. Right?

That’s it for today, folks. Take care and be sure to help out with your own input down below.