Can Endurance Training Ever Really Be Primal? 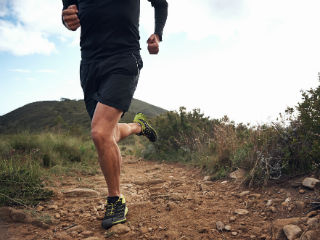 For over a dozen years, I’ve railed against what I call “chronic cardio“—the excessive, unrelenting endurance training I did for the better part of three decades. Most of my health issues cleared up when I stopped stopped running and training for marathons and triathlons, removed the refined grains and sugar I ate to support my endurance training, and began taking it easy. Explore the MDA archives and you’ll read all about the downsides of chronic endurance training, as well as my experiences in that world. Next to Primal living, most people probably know me best for being against “chronic cardio.” It’s kinda my thing.

As a result, a lot of people have this idea that any type of endurance training is verboten and totally antithetical to the Primal way of life.

That’s a misconception, albeit an understandable one. But it’s persistent. I have been outspoken against chronic cardio. I’ve also released a book called Primal Endurance.

How do I square my distaste for chronic cardio with the fact that I wrote an entire book devoted to endurance training?

First, what am I talking about when I say “chronic cardio”?

Chronic cardio is excessive. The occasional big effort doesn’t count. Even running a 10k on the weekends isn’t enough to qualify. Running a marathon once isn’t chronic. Running marathons every month and training for them 3-5 days a week, making every workout a breakthrough one, and running every single day are all examples of chronic cardio.

For endurance training to qualify as chronic cardio, you have to engage in day-in, day-out, moderate-high intensity, high volume training. It’s not so intense that you can’t keep it up for 5-10 miles, but it is intense enough that you’re burning primarily sugar. That’s the no-man’s land of chronic cardio—not too hard, not too easy, just right (wrong).

I hesitate to offer a quantitative definition.

I’ve tried to give a few rough guidelines, like “don’t burn more than 4000 calories a week through exercise.” But there’s no red line in the sand, where doing x number of miles per week catapults you into chronic cardio territory. It’s relative. It depends on your fitness level, health status, and age.

Does your endurance training leave you feeling mentally exhausted and depleted? When it’s over, are you dreading the next one? Do you actually enjoy the session as it’s happening, or is it sheer misery from start to finish?

You know it when you see it, in other words.

Why is chronic cardio bad for us? Isn’t all exercise good?

Sorta. But some types are definitely better than others. For instance:

Chronic cardio causes chronic inflammation. Any training session acts as a stressor and increases oxidative stress. Endurance exercise works by triggering a stress response that we must overcome and get better at overcoming. This is the training effect. But for the training effect to occur, we must rest and recover.

Because they train so hard at a high enough intensity, people engaging in chronic cardio never fully recover from that initial burst of oxidative stress. Not only does this impair training gains, it heaps stressor upon stressor, inflammation upon inflammation, and causes damage down the line. Acute oxidative stress stacks up and becomes chronic.

Chronic cardio enthusiasts often have undiagnosed heart issues. Excessive endurance training can cause excessive hypertrophy of the heart tissue. More than a few friends and colleagues over the years with whom I trained and competed have had to install pacemakers and defibrillators before the age of 40 to stave off heart problems stemming from this. Others have lost cardiac function. Some have even died. These are the super fit, the cream of the crop. And it’s not just my own anecdotes. Evidence suggests that long term chronic cardio increases the risk of atrial fibrillation and atrial flutter.

Chronic cardio makes you fatter, not fitter. We’ve all seen (or experienced) it. Overweight person attempts to not be overweight, picks up a running habit, sticks to it, is always ravenous, feels they’ve “earned” a brownie or small fries or chicken nuggets because they ran that day, rinse/repeat, stays the same size if not a little chubbier around the middle.

Chronic cardio turns you into a sugar-burner who always needs a fix and can’t go two hours without eating. It turns you into an inflamed stress ball (not the kind you squeeze). You’ll probably lose weight, but it’ll mostly be muscle. A recent paper even found that replacing some of your aerobic activity with 20 minutes of weight training each day resulted in the greatest reduction in waist circumference—perhaps the best marker of fat loss without getting a DXA scan.

So…endurance training is off the table?

No, but it’s important to do it right.

Brad Kearns and I wrote Primal Endurance to provide a better, safer, gentler way for endurance athletes to keep doing what they love. The coolest part of all is that it’s ultimately more effective than the the old chronic cardio way, which is to brute force your training. Go hard as you can, as long as you can, as often as you can, and your times will improve. And it “works”, but many fall to the wayside, only the strong truly thrive, and even they come up limping to the finish.

So PE is partly a mitigating force. Endurance athletes are a stubborn breed. I certainly was (and still am). You have to be to put up with all that pain and suffering. And the vast majority of them are going to run (and bike, and swim, and all the rest) despite what studies and experts and oftentimes their own bodies are telling them. It’s addictive, and it can be very rewarding. I’ve been there.

Primal Endurance offers a way for endurance junkies to maintain their habit, make it healthier and perhaps even more effective.

But you do have to embrace the entire program for it to work. A successful (and by successful, I mean performs well and stays healthy) Primal endurance athlete must:

By all accounts, it’s a superior training method that builds an incredible aerobic base and allows you to reduce your training volume and intensity while compromising neither health nor performance.

Ultimately, Primal Endurance is a response to traditional forms of chronic cardio. It repudiates and replaces chronic cardio. It provides what so many seek when they strap on the jogging shoes, sign up for the 10k, or train for the half marathon—increased fat-burning capacity, improved aerobic fitness, greater fuel efficiency—without compromising health or performance.

The major impediment to widespread adoption of the PE methods is disbelief: It’s hard to believe that going easier can improve your fitness, performance, and health. That doing less can actually be more.

But it works. And things are changing. Elite athletes are adopting more Primal-friendly methods. The book is selling really well, and we’ve developed a comprehensive multimedia online course for folks who want to become fat-burning Primal Endurance beasts.

That goes for everyone, not just the elites or dedicated amateur athletes. Newbies and laypeople and weekend warriors and total non-athletes can all benefit from having a broad aerobic base and improving their fat-burning capacity.

The reason PE works for everyone is that it tailors the intensity to the individual’s ability. I don’t care if you’re Lance Armstrong, Rich Froning, Serena Williams, or grandma. If you follow the Primal Endurance training philosophy and keep your HR at 180 minus your age for the majority of your training, you’ll build a sturdy aerobic base and gradually increase your aerobic efficiency. This is good for runners, cyclists, triathletes, wrestlers, CrossFitters, Spartan racers, gardening enthusiasts, power walkers, sprinters, weight lifters, P90Xers, basketball players, and yard putterers.

To sum up, endurance training is Primal. You just have to do it the right way.

I’d love to hear how you’ve incorporated endurance training into your Primal way of life? What worked, what didn’t, what changed?