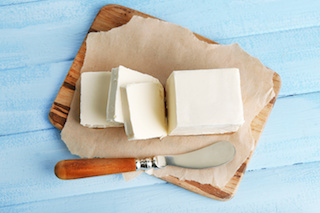 For today’s edition of Dear Mark, we’ve got a quick two-parter. First up, I discuss the results of a 2008 study into the effect of high acute intakes of various fat sources on postprandial (i.e. after eating) blood coagulation markers. Since butter came out looking not so hot, a reader wonders whether this should impact our butter consumption. Find out what I think down below. And after that, I explore infant growth charts and early weaning from breast milk in response to a new father’s question about a doctor’s suggestion.

I study health and nutrition, and the book we use (Understanding Nutrition by Whitney Rolfes, 13th edition) is all about eating less saturated fat. They cite a quite convincing study that shows that butter could promote blood clotting. I read the whole study and couldn’t find any faults using my limited abilities. The study is: “Chronic dietary fat intake modifies the postprandial response of hemostatic markers to a single fatty test meal” It appeared in the American journal of clinical nutrition. Am J Clin Nutr February 2008 vol. 87 no. 2 317-322. I’d like to hear your thoughts about it!

Great question, Bram. Let’s look at this study. The researchers, as you say, were looking for dietary patterns that increase the risk of blood coagulation. It’s easy to understand why: if a blood clot blocks the flow of blood, you get a heart attack.

To start, subjects were placed into one of three diet groups for 4 weeks:

After the four weeks, the subjects all tested their markers of blood clotting in a fasted state. None of the diets had a distinct effect.

Next, the researchers tested the same clotting markers immediately after a large meal resembling their assigned diets to see if the postprandial picture was different. It was:

In all dietary groups, markers of coagulation were elevated after meals. However, the butter group had worse numbers. There’s no way around that. So, avoid all butter altogether?

The meal was huge, comprising roughly half to 2/3 the total number of calories they typically ate in a day. All groups felt the effects, with coagulation biomarkers going up across the board. So olive oil and walnuts also “could promote blood clotting” along with butter, provided you eat enough calories in a sitting.

The butter group ate about a quarter to a third of a stick of butter with their meal. Is that a typical way to eat butter? It’s definitely way more than I use in a sitting.

The butter group consumed very little omega-3, just 0.4% of calories. And what they did consume came from alpha linoleic acid, the less effective plant form of omega-3. Having a little salmon with your butter – or perhaps a little butter with your salmon – will probably make a big difference.

Most importantly (in my opinion), the butter group ate about half their calories as carbs – far from low-carb. As I’ve already covered, large amounts of saturated fat don’t pair well with large doses of carbs. You can definitely get away with eating carbs and fat together, especially if you’re lean and active, but when you’re eating 2/3 of your daily calories in a single sitting, things get hairy. That’s a huge amount of food to deal with at once. And energy overload (of any source) will increase insulin resistance, which is frequently linked to increased blood coagulation. Combining palmitic acid (in butter) with carbohydrate makes it even worse and amplifies the insulin response.

The specific foods included in the diets (besides the fat sources) weren’t available in the study text, so I can’t know for sure, but the researchers do mention that the carbs came from bread. In women, a recent study found that while butter used on bread increased the risk of heart attack, butter used for cooking did not increase the risk.

Other lifestyle factors modify the effect. Berries consumed with a high-fat meal have been shown to reduce the increased postprandial coagulation markers, and regular exercise (or simply being fit) also reduces the postprandial coagulation response; I bet going for a 20 minute walk after meals would also be beneficial. Berries and regular exercise are standard Primal fare, wouldn’t you say?

I know it’s fun to brag about heroic doses of grass-fed butter. And thumbing your nose at the health authorities who caution against even a single pat of the stuff by actually buying and eating butter is important. But be careful not to go too far in the other direction. Just because some butter is safe and health-promoting doesn’t mean a half stick as a meal is safe and health-promoting.

Does anyone really need a half stick of butter with (or as) their meal? Aren’t there other things a person can be eating with butter instead of just piling on more and more?

Eat a variety of foods, including colorful fruits and vegetables.

My wife and I both eat primaly and our kids are rapidly becoming more primal! Our youngest is currently 4 months and being breastfed, however weight gain is very slow and our health visitor is recommending early weaning. Any thoughts on this and weaning a baby primally in general?

You may have nothing to worry about. Exclusively breastfed babies travel a different growth trajectory than formula-fed babies, and the growth charts used by doctors may not be up to date. The chart from the World Health Organization is ideal for breastfed babies, as it reflects growth patterns in children who were breastfed for at least 4 months and usually up through a full year.

The 1977 growth chart used babies who were weaned at 4 months and primarily fed formula. That’s not representative of a breastfed baby, whose normal growth slows down right around month three.

In its own FAQ, the CDC recommends against using the CDC growth chart for breastfed babies and admits that the WHO chart shows how “infants should grow rather than simply do grow.”

Make sure your health visitor is referencing the WHO growth chart before proceeding.

If you do go with early weaning, consider implementing some foods rich in prebiotic fibers to reduce the risk of food intolerances. In one recent study, researchers used prebiotics during the post-weaning period to induce tolerance in a mouse model of allergy (where allergies are basically guaranteed). Both galactooligosaccharides (GOS) and inulin were effective. GOS resemble (and approximate the effect of) the prebiotics found in breastmilk, while inulin – found in foods like leeks, jerusalem artichokes, and jicama – is an indigestible blend of fructose polymers that your gut bacteria break down into short chain fatty acids. If your kid’s not into leeks, jerusalem artichokes, and jicama, you can always buy supplements of both GOS and inulin and add a small bit to food they do like. Smoothies, milk, yogurt, and other amenable food mediums will all work.

Oh, and if you do wean, keep the breast milk flowing! That will also improve your child’s tolerance of newly introduced foods and it’s actually the recommended path by most experts.

Thanks for reading, everyone. Be sure to chime in with your own responses if you have anything to add to (or counter) what I wrote!