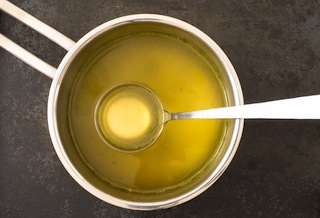 With bone broth bars popping up in cities, broth-based cookbooks appearing on Amazon, and grass-fed bone broth now available for order online, hot bone water is experiencing a renaissance. And not just among Primal devotees. Dr. Oz is recommending it as a coffee replacement and Kobe Bryant uses it to support his aging body. The renewed popularity has brought an endless string of questions from readers, and today I’m going to answer some of them. Is bone broth truly a miracle food? Yes, but maybe not for the reason you suspect. Should you make deer bone broth? Yes, with a caveat. Does adding vinegar to your water really increase the mineral content of your broth? Probably not as much as you think. Do beef brisket bones work? Yes. And finally, what are the best parts from each animal for making broth? I give a slightly more detailed answer than “All of them.”

Some people talk about bone broth as if it’s some kind of miracle food—particularly people in the paleo world. What’s your take? I know you suggest people make and consume it, but is it really all people crack it up to be? I mean, how much nutrition can really be pulled from bones? Thanks, Mark.

The biggest nutritional takeaway from bone broth is the gelatin. Excessive methionine, the amino acid found in steak, eggs, dairy, and other “evil” animal foods, can reduce longevity in animal trials, which is why the life extension/calorie restriction crowd is so preoccupied with limiting it. They want to wring out a few extra years, and they’re willing to abstain from everything delicious to make it happen. It turns out that full-on methionine restriction may be unnecessary if you eat enough gelatin; glycine, the primary amino acid present in gelatin, “opposes” the methionine present in muscle meat. Adding glycine to a methionine-rich diet has even been shown to mimic the life extension seen with methionine restriction.

A bone broth habit, then, may allow you to enjoy the benefits of a diet rich in animal protein—good body composition, superior recovery from training, strong bones, overall robustness—while avoiding the downsides. Gelatin’s (particularly the glycine component) also good for sleep. A big mug of broth an hour before bed always puts me down.

Broth should contain hyaluronic acid, a promising pro-joint nutrient. Race horses with bad osteoarthritis get intra-articular shots or IVs of synovial fluid, and studies on oral administration indicate that hyaluronic acid is the active component. You can also find hyaluronic acid in the bones and the connective tissue of an animal, and they even make a high-hyaluronic acid extract from chicken combs—that fleshy red waddle that sits atop a chicken’s head—which improved quality of life and reduced pain in patients with osteoarthritis.

Chondroitin sulfate is a popular but controversial joint health supplement. Skeptics say it’s a scam. The osteoarthritis patients participating in the study which found that six months of chondroitin sulfate supplementation reduced their cartilage loss probably have a different opinion. Since the supplements are made from animal cartilage, and the keel cartilage of the chicken back bone is a particularly rich source of water-soluble chondroitin sulfate (PDF), a broth made with plenty of cartilaginous substrate should be a good option.

Minerals? The vast majority of bone broth as it’s commonly made is not a good source of minerals. It simply isn’t acidic enough to pull calcium phosphate from the bones. Older studies indicate the bone broths richest in calcium are actually the ones made with vegetables, and a more recent study of bone broth’s mineral content commissioned by Sally Fallon of the Weston A Price Foundation—who has been touting the calcium and magnesium content of broth for decades—came up mostly empty.

Nutrition aside, broth remains a miracle food because it’s absolutely indispensable for high-level cooking. Go to a great French restaurant and there’ll be a stock-based reduction sauce in just about everything you eat. Home cooking becomes otherworldly when you have ample amounts of bone broth on hand for hearty soups and to reduce into syrupy sauces that coat the mouth.

It’s hunting season and I will probably take 4-5 whitetail deer this season. I have read about the benefits of bone broth on your site and would like to know is it feasible to make bone broth from the bones of the deer I will harvest. Also, would making the broth from deer bones be the same process as making it from grass fed cow bones? Lastly, do you have a recipe for bone broth that I could follow for the deer bones?

Making broth from deer bones should be about the same as making it with any ruminant’s bones. Roast, add spices/herbs, cover with water, boil, reduce to simmer. Or roast and throw in a pressure cooker to save time. Maybe throw in a few juniper berries to counter some of the gaminess, if that’s a problem for you.

I gotta say that I’m jealous. I’ve never made deer bone broth, but what with all the running, leaping, and general high intensity movement these beasts do, I’ve got to think they’ll have some dense connective tissue, sinew, and gristle. That’s the stuff you want for great stock. It’ll turn into gelatin and make your broth gel at room temperature.

There is chronic wasting disease to consider. Although the pathophysiology is still unclear, and no human cases have been recorded or observed to date, you should probably make sure chronic wasting disease isn’t a problem among deer in your area before using the bones (or the meat, for that matter). The prions that may cause it tend to accumulate in bone, brain, and spinal tissue and are highly resistant to cooking.

I’ve read everywhere that adding vinegar to bone broth helps bring out the calcium of the bones. But I know that vinegar is an acid and calcium is a base and they neutralize each other and become new molecules when combined. So, when the vinegar brings out the calcium, is it changed to something other than calcium and not as helpful to us?

To really extract the calcium in bone, your medium needs to be very acidic. I’m talking close to pure vinegar, with a pH of 2.4. Stick a chicken bone in a jar full of vinegar and it’ll get bendy and pliable after a few days. That’s because the calcium phosphate has leached into the water. Unfortunately, swapping water out for vinegar doesn’t really work when making broth. It’s expensive and completely unpalatable. Adding a few tablespoons doesn’t lower the pH enough to make a difference. So, out of luck?

Maybe not. In a 1933 study (PDF), researchers wondered how Chinese women were getting enough calcium without consuming dairy, particularly in a calcium-intensive phase: right after childbirth. They looked at a traditional meal that Chinese women would eat three or four times a week for over a month immediately after giving birth. The dish in question consisted of pork feet simmered in vinegar, soy sauce, and sugar. To quantify the amount of calcium being drawn out of the bones and into the sauce and meat, the researchers tested a similar dish using pork spare ribs instead of feet. Same concept: meat and bones simmered in a vinegar-based (3.2 pH) sauce for about an hour. This produced high calcium levels in both the sauce and the meat.

Looks like a pH of 3.2 is plenty acidic for adequate leaching of calcium. How to do it without turning your broth into a vinegary abomination?

Simmer the bones in red wine before adding water. Red wine has a pH between 2.9 and 3.5, so it could work without involving vinegar at all. Plus, red wine tastes better than vinegar. I’ve thrown an entire bottle of zinfandel in with a batch of bone broth; it worked. Why not pre-cook the bones in wine to draw out minerals, then add the water?

Smash or blend the bones before adding vinegar. This will increase the surface area exposed to vinegar and make it easier to submerge everything. You’ll probably want to precook the bones to make smashing/blending possible/easier. If you want to blend, use a high-powered blender like a VitaMix.

But for the most part, adding a couple tablespoons (or even a half cup) of vinegar to a ton of water won’t affect the pH enough to draw out appreciable amounts of minerals.

This is my first time to make grass fed beef bone broth. I have done a lot reading in how to make it.

My grass fed beef bone was delivered today from Slanker grass fed meat and it is still frozen. I have six pounds of beef knuckle marrow bones that I plan on cooking to make beef broth. I also have 12 pounds of beef brisket bones suppose to be the dog bone edible brisket.
My crazy question is, can I use the beef brisket bones to make bone broth? If so, is it any different than the marrow bones?

I’m not clear on what a beef brisket bone looks like, but any bone works. Some better than others. Brisket is a “tough” piece of meat, which is code for “contains lots of collagen” which is code for “will leach into cooking water and produce a rich broth.” If there’s a lot of meat, you might want to pull them out and strip the meat once it’s fall-off-the-bone tender. Save or eat the meat and return the cleaned bones to the pot. Letting large amounts of meat boil in a broth for more than a few hours can mar the taste.

Beef knuckles are probably the best beef bones for making bone broth. Between those and the brisket bones, I suspect the broth you’re going to make will be incredible and demand you send me a sample.

Can you make broth from any bone from any animal? Are some parts better than others?

For the richest, most gelatinous broth, favor bone junctions and intersections—where one bone meets or crosses another—and moving parts. Those bits contain the most collagen, which translates into great bone broth.

If you’re making poultry broth, be sure to include feet, necks, backs, and wings.

If you’re making beef or lamb broth, include knuckles, tails, feet, and necks.

If you’re making pork broth, include ears, tails, feet, knuckles, and hocks. Use an entire head if you can get one.

If you’re not sure, or you’re making broth from an unknown creature or cryptid whose anatomy hasn’t been catalogued, just stick to joint intersections and moving parts. These will reliably make the best broth.

That’s it for today, folks. Thanks for reading, and if today’s post brings up any new broth-related questions, shoot them my way or leave them in the comments.