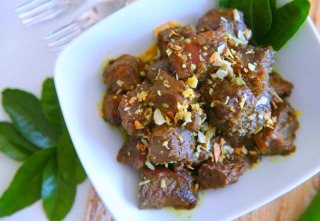 Rich in spices and slow-cooked in coconut milk, Indonesian Beef Rendang has a lot in common with beef curries from other countries. You get healthy fat from the coconut milk, plus spice and herb based antioxidants in every bite. Not to mention unbelievable flavor. These are not shy ingredients: rendang is all about making a big, bold statement.

Imagine hot chile peppers, shallots, garlic, ginger, galangal, kaffir lime leaves, lemongrass, cloves and cinnamon—tamed only slightly by sweet, creamy coconut milk. The beef is braised in this intense fusion of flavors long enough to soak up all of the sauce. Rendang isn’t going to win any beauty contests, but when food tastes this good, who cares what it looks like? 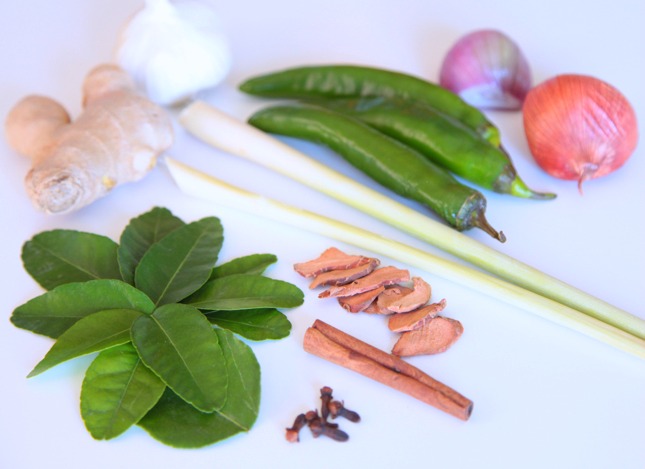 If fresh galangal can’t be found, dried (not powdered) can be used. For this recipe, soak 1 tablespoon dried galangal in hot water for 20 minutes until pliable. Chop as finely as possible with a knife before adding to the food processor with the other ingredients 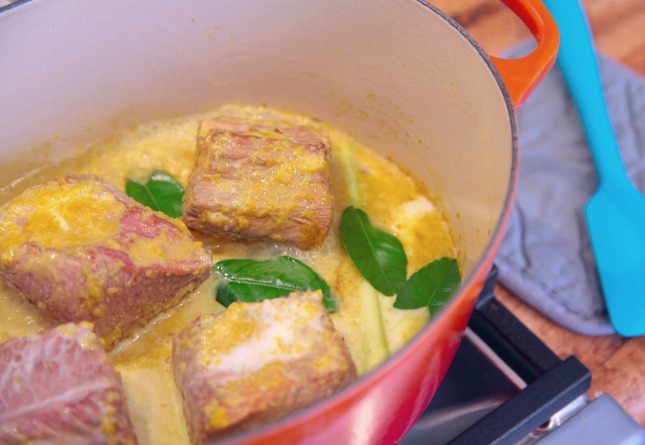 In a food processor, pulse the chiles, shallots, garlic, ginger, galangal and turmeric until a coarse paste forms. If needed, add 1 tablespoon water to help a paste form.

In a wide skillet or Dutch oven over medium heat, warm the coconut oil. Add the spice paste, stirring constantly until the spice mixture is warm and fragrant but doesn’t begin to brown, 3 to 5 minutes. Add the meat, stirring well to completely coat in the spice paste.

Add the coconut milk, lime leaves, lemongrass, cinnamon stick, cloves and salt. Bring to a boil. Reduce heat to medium low. Simmer the meat, uncovered, for 1 ½ hours. Stir frequently to make sure the coconut milk is not scorching to the bottom of the pot. (If using short ribs, pull the meat from the bone halfway through the cooking process and cut the short-ribs into 2-inch pieces so the meat is better covered by the coconut milk.)

When the sauce is almost completely absorbed by the meat, and the meat is very tender, discard the cinnamon stick, lime leaves and lemongrass. Mix the coconut flakes in with the beef before serving. 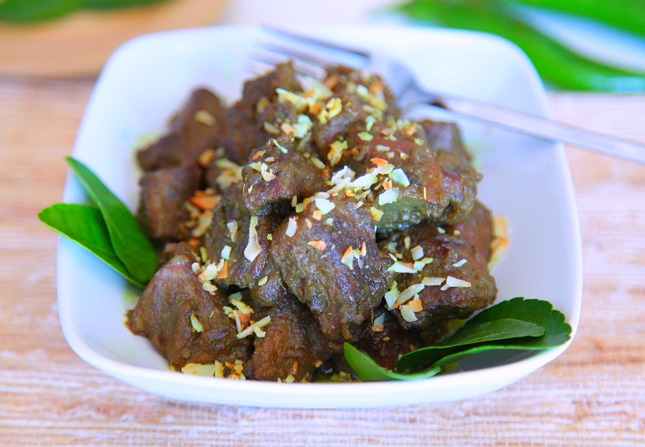