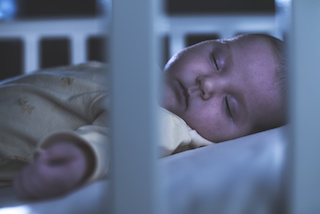 For today’s edition of Dear Mark, I’m answering two reader questions. The first comes from reader Larisa. She is about to give birth, has been hearing the “wake your newborn every 2 hours to feed” recommendation, and wonders how realistic, evolutionarily-congruent, and healthy that will be for new parents desperate for sleep. I offer a few loose recommendations that hopefully make her feel better about what’s about to descend upon her life. Second, is there such a thing as too much low-level activity? Mariel walks 10+ miles a day, strength trains, and stands when she gets tired of walking. Her coworkers think she’s crazy. What do I think? Find out below.

I’m about to have a baby, and I’m curious about the recommendation I’ve had that I need to wake up the newborn every 2 hours to feed it at night, even if the baby is sleeping and not hungry. Presumably, Grok did not have alarm clocks, and presumably, the extreme sleep deprivation associated with waking up every 2 hours would make the mother an easy prey for whatever preyed on Groks in those days. What would Grok do, and are there Primal recommendations for baby sleep patterns?

Sure, if your newborn is sleeping 12 hour stretches right off the bat, something might be amiss. That definitely isn’t typical or normal. And if your baby isn’t gaining weight on schedule, you may need to wake him to ensure adequate calorie intake. If your child was born prematurely, special feeding schedules are probably necessary, and your doctor will give you guidance; heed that guidance. But if everything is going well, just let your baby decide. Finnish newborns eat every 4-6 hours at night, and I strongly believe that’s a good thing. There’s no research behind this, it’s more of a pet hypothesis, but I wouldn’t be surprised if waking and force-feeding kids according to your schedule rather than theirs has an undesirable effect on their ability to self-regulate hunger and satiety.

Consider what you’ve got in a newborn: a pristine force of human nature, the purest expression of what’s intrinsic to humans before environment and culture and upbringing get their claws in and muck about. That child is going to be clued in to whatever he or she needs, moment by moment. If he needs food, he’ll tell you. If he need sleep, he’ll keep sleeping. He’s the best arbiter precisely because he’s just going purely off subconscious physiological urges.

It’d be great if parents could just decide how their newborns slept, fed, and woke. But while there are certainly parents who’ve had success with behavioral sleep interventions, the majority of the evidence for sleep training is weak, nonexistent, or plagued with methodological errors. In my book, the best recommendation is not to impose a top-down sleep schedule for your baby but to consider co-sleeping, bed-sharing, or at least room-sharing because those enable and promote natural sleep patterns. Most pediatrics groups are actually recommending that parents room-share with their newborns because the evidence in favor is so overwhelming (although they still oppose bed-sharing).

Co-sleeping hews your sleep wake schedule to your baby’s (or maybe it’s vice versa) so you’re in tune with each other—naturally. It also changes how you perceive the wake-up. In one study, co-sleeping parents rated their night wake-ups as less disruptive than parents who slept apart from their babies. Turns out your 2 month-old son nuzzling your neck and murmuring baby nonsense into your ear is a better way to wake up than your 2 month-old wailing from another room. Who knew?

All this means you can react to the baby’s immediate needs immediately rather than try to guess with arbitrary wake-up and feeding times. Also, you’re less likely to be angry and stressed out when you do wake up (you’ll still be a little angry and stressed, of course, and that’s okay!).

Too often, parents assume their newborns are fleshy vegetables unable to accept sensory data. They’re just there, completely helpless and passive. Really, kids absorb that stuff and are subject to the same laws as us. They may not be able to think about the blue light they’re seeing, but it still affects them. Minimize circadian disruptions for the baby just as you would for an adult. That means:

Lots of light during the day. Babies who receive ample daytime light, especially natural light (yes, a bit of sunlight is perfect safe for infants) during the afternoon, are more likely to sleep better at night.

Keep the TV and electronics off once it gets dark. Don’t bathe your baby in blue light then wonder why she refuses to sleep.

The basic stuff that works for us applies to your baby, too.

In short, your child will have strong opinions about Primal sleep patterns. They’re probably right and you should listen.

How much low level movement is too much?

I have a treadmill desk that I average 10 miles a day on. I also usually add in a gentle bike ride and there is always some outdoor walking, as well.

I also exercise (body weight and plyometric exercises plus kettlebells) most mornings.

People are freaked out by how much I walk. When I’m tired I stop walking and stand at my desk, so I don’t really see the problem. I do have an “all or nothing” type of personality in general, though.

Do you think there is such a thing as too much walking and low level movement?

Thanks so much for any input! I really value the opinion of MDA!

People are freaked out because you live in a sedentary society where people take the elevator to go up or down one floor. Where instead of using their legs, they use moving staircases. Where rather than grab the first parking spot they see, people will drive for ten minutes just to get one near the entrance. When you see these examples written out, they sound preposterous. Moving staircases? C’mon! But they’re normal, and most of us fall into the same patterns without thinking.

You’re not, and that’s weird and threatening.

I’m a little jealous of you. 10+ miles a day? Dang. I wish I could manage that much.

Let me avail your concerns: you’re probably okay. If modern hunter-gatherers like the Ache or Hadza are any indication (PDF), our ancestors walked anywhere from 6 to 16 kilometers on an average day. Another recent study pegs the Hadza as walking between 6 and 11.5 km a day on average, with women walking toward the lower end of the range and men toward the higher. Those aren’t quite 10 miles per day, but modern examples exist, too. There are rural South African women, of whom just 11.9% can be classified as sedentary (under 5,000 steps a day) and for whom an average day means walking 10,594 steps or just over 5 miles (many of them done while carrying a load). Most impressive are the Amish men and women aged 18-75 (PDF), who walk an average of 18,425 steps (about 9 miles) or 14,196 steps (about 7 miles) each day respectively.

If you’re getting enough food, have at it. If you still have the energy to do your work and train, keep up the miles. I’d say if walking starts cutting into your ability or willingness to lift heavy things (or bodyweight/kettlebells), reduce the walking and keep the training. Ten miles a day plus strength training is better than 14 miles a day and no additional training. Low level movement is the foundation, but those short, intense bouts of dedicated training are indispensable.

As always, folks, fill in any gaps in my answers down below with your comments. You’re a huge wealth of knowledge; let it shine!