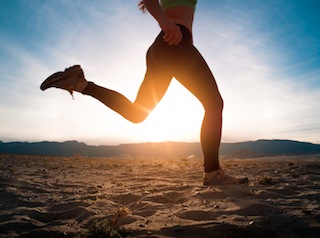 Modern elite athletes have different goals than our hunter-gatherer ancestors. Their training loads are higher and their physical activity is contrived and somewhat artificial. But for the most part, elite athletes are working with the same metabolic and neuromuscular machinery as Grok. The activities and movement patterns that benefited and shaped the evolution and performance of our hunter-gatherer ancestors should thus prove useful for contemporary humans seeking optimal physical performance. According to a recent paper (PDF), many top athletes have settled upon the hunter-gatherer fitness modality as optimal for performance. Even highly specialized athletes without much room in their routine for generalizing – like marathon runners who have to be able to log insane mileage at high intensities above all else – are incorporating aspects of paleolithic fitness to improve their training. These athletes and their coaches aren’t combing the anthropological records to devise their programs; they’re inadvertently arriving at similar conclusions because that’s where the latest exercise science points.

What movement and training patterns am I talking about, exactly?

Shift away from “one size fits all” periodization.

Grok didn’t follow a predetermined workout routine or fitness program. Instead, ancient humans autoregulated their physical activity according to energy availability and expenditure. If yesterday was a heavy day of hunting, butchering, and carrying the food back to camp, and food was plentiful for the next few days, what would be the point of going out again and expending more energy? Heck, he might take a deload week if he could get away with it. The only reason we train hard on consecutive days is because the program says to do it. Because we think we “have” to workout. If we listened to our bodies, like hunter-gatherer ancestors had to, we’d take a lot more rest days and we’d actually get more out of workouts.

Unfortunately, “one size fits all” periodization makes for easy programming. Instead of coming up with personalized routines for each athlete, you hand everyone the same program. Sometimes this works. Total novices respond well to any kind of physical activity, and they’re coming from a similar starting position, so a general program will work for them. That’s one reason why beginning strength routines like Starting Strength can get anyone starting from scratch fairly strong fairly reliably. But to optimize performance and training adaptations, you’ll have greater success with dynamic programming that heeds the athlete’s dynamic needs.

These days, the advent of heart rate variability tracking is allowing modern elite athletes to monitor the state of their autonomic nervous system activity, avoid overtraining, and adjust their training accordingly – and they’re getting better results than athletes who follow predetermined training plans that fail to account for the day-to-day fluctuations in rest/recovery balance.

You know how I’ve always said make your long, easy workouts longer and easier and your hard workouts shorter and harder? The foundation of Primal Blueprint Fitness is lots (and I mean lots) of low level activity. Easy walks, hikes, cycling, even jogging (depending on your base fitness level) all qualify, as long as you avoid dipping into the medium-high intensity zone for too long and too frequently. We punctuate this slow, frequent movement with infrequent bouts of extremely high intensity – strength training and sprinting. From the available anthropological and ethnographic evidence, this seems to characterize the likeliest activity patterns of paleolithic humans. Humans were obligate walkers, with modern foragers putting in an average of 6 to 16 kilometers a day (PDF). And when they weren’t walking, they usually still had to constantly move in order to perform the day-to-day tasks required for survival. Bursts of intensity – lugging a heavy carcass, throwing a spear, climbing a tree to grab honey, sprinting after something – were relatively infrequent but no less crucial in shaping our fitness.

Paleolithic hunter-gatherers couldn’t hop on down to the grocery store for food. They had to expend energy to obtain energy – they had to “exercise” – and they often did it without fully-stocked muscle glycogen stores. This is familiar territory for any regular reader of this blog, but rather than focus on how this discrepancy might explain modern conditions like obesity and diabetes, I’m more interested in how it affected our adaptation to physical training. When you train, or hunt, or forage in a glycogen depleted state, you augment the normal adaptations to exercise. You get better at burning fat for energy and conserving muscle glycogen during physical activity. You increase mitochondrial biogenesis.

Modern athletes have taken this concept and run with it, creating the “train low, race high” modality. From cyclists to marathoners to triathletes, endurance athletes have begun including low-glycogen training sessions in order to improve their fat burning capacity and glycogen conservation. Then, when it’s race day, you load up on glucose, fill your muscles with glycogen, and enjoy the benefits of fat adaptation. You can go longer without dipping too much into your precious glycogen, and by the time the last leg of the race rolls around, you have more glycogen left over than the next guy who’s bonking. The latest exercise science agrees: athletes should incorporate “train low” days in order to take advantage of this ancestral metabolic pathway.

Back when I was competing, endurance guys dabbled in strength training, but a lot of it was for show and primarily focused on the upper body. A belief that training the legs with heavy squats or deadlifts would only tire you out, slow you down, or run the risk of injury ran through the community and so people neglected their lower bodies. Plus, after the kind of heavy, chronic sessions we’d frequently put in, the last thing anyone wanted to do was lift something with their legs.

While strength training myths persist in the endurance world, the tide is changing. The research has confirmed what Grok “knew” eons ago: everyone can benefit from strength training, even, or especially, endurance athletes. Concurrent strength and endurance training improves running economy, peak velocity, force development, and overall performance in endurance athletes of all stripes. There’s even evidence (PDF) that an endurance session acutely potentiates a subsequent strength session, as if our bodies expect us to lift and manipulate heavy things (carcasses?) after running (or chasing/hunting something down?). Wild.

I don’t know about you guys, but I’d say this is all a very strong sign that we’re on the right track with all this “heed the lessons of the past and run them through the prism of modern scientific research” stuff. Wouldn’t you?

Thanks for reading, everyone. If you have any questions, comments, or concerns about today’s post, let’s hear it in the comment section below!