Antibiotic Resistance: Are We All Doomed? 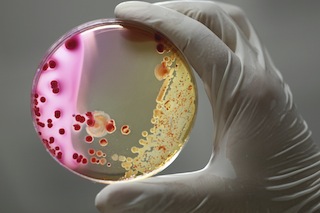 The future prospects of antibiotics look grim. Headline after headline proclaims the mounting resistance to antibiotics among pathogenic bacteria and the impending inefficacy of our best drugs to fight them. Antibiotic-resistant “pig MRSA” has been documented moving from pigs to people in several countries, including Denmark and Holland. That same MRSA has also been found in the US, England, and is likely brewing wherever pigs and other animals are intensively raised. And just recently, researchers discovered that MCR-1, the gene responsible for resistance to the “last line of defense” antibiotic—polymixin, the one we use when everything else has failed—is transferable between different strains of E. coli. Formerly relegated to pigs, E. coli and K. pneumoniae bacteria with the MCR-1 mutation have appeared in human subjects in several Chinese hospitals. Transferring the gene between different bacterial species is theoretically harder, but that it’s possible at all has raised alarms in the scientific community.

It’s not just industrial farms and antibiotic overuse causing the resistance. Even the scientists studying the problem and running experiments with antibiotics could very well be promoting antibiotic resistance on a larger scale.

This isn’t a modern phenomenon. Humans and bacteria have been embroiled in the antibiotic arms race for at least as long as we’ve had modern antibiotics. Heck, a few months after penicillin was released to the general public, scientists identified several strains of staph that had developed complete resistance. This happens every time. An antibiotic is released, bacteria become resistant, a new antibiotic comes out to counter the resistance, the bacteria develop resistance to the new drug. It never ends, and because their generations are so much shorter than ours, the bacteria have the advantage.

So, are we doomed? Will antibiotic-resistant superbacteria take over the world? Will bacterial biofilms blanket the globe, supplant nations, and battle each other for global supremacy? Will the few human survivors be forced into personal bubbles, impermeable to any and all microbes, gathering resources until the chosen one (who looks a lot like Keanu Reeves) emerges to lead a Purel-soaked rebellion against the microbial overlords?

Don’t despair. All is not lost. We don’t have to wait for Keanu to save us. There is hope.

Most antibiotics come from studying how bacteria attack each other. Turns out it takes one to know one. But we’re limited in how many different types of bacteria we can study because 99% of the bacteria you’d encounter in the outside environment simply don’t grow under normal laboratory conditions. This drastically shrinks the window of research you have and makes creating effective therapies next to impossible.

Earlier this year, researchers figured out a way to get those ornery wild-type bacteria to grow and prosper in controlled settings: by bringing their native dirt into the lab. Once established and happy in their soil, the bacteria are slowly weaned off and “domesticated.” Then they move to petri dishes, where they thrive and the researchers can get studying. This method has already produced one viable candidate—teixobactin—which some are calling “resistance-resistant.” While that smacks of human hubris, it does look good thus far in animal trials, demolishing event resistant gram-positive bacteria like MRSA and C. dif while failing to confer any resistance to them during extended low-dose exposures. Unfortunately, teixobactin can’t touch gram-negative bacterial pathogens like K. pneumoniae or V. cholerae.

Still, the research field just opened up. 99% is a lot of bacteria and I bet they’ve got some nifty antibacterial tricks we can utilize.

In the “golden age” of antibiotics research, around the middle of the last century, many potential antibiotics were discovered but shelved due to low commercial appeal or toxic side effects. Even mild side effects could get an antibiotic relegated to the dustbin. By and large, antibiotics just “worked,” so employing a wide and varied arsenal was neither necessary nor financially lucrative. With antibiotic resistance reaching critical levels, microbiologists are going back to the well and tweaking the older, more toxic antibiotics to be safer for us and worse for bacteria.

There’s another advantage to going back to older antibiotics: sometimes it’s been so long the resistance has disappeared. After all, maintaining resistance to specific antibiotics requires constant exposure to the antibiotic. If the antibiotic’s no longer in use, resistance to it no longer provides a fitness advantage and resistance—at least in theory—can wane. The flipside of generations lasting a day or two is that non-essential traits get quickly weeded out.

Researchers have unearthed ancient medical texts to trawl for herbal remedies that actually work. And, guess what: some appear to be especially effective against medication-resistant infectious microbes.

Christina Lee is an Anglo-Saxon linguistics expert at the University of Nottingham. During the course of translating and searching an Old English medical textbook from the ninth century called Bald’s Leechbook for potential antimicrobial remedies, one entry in particular intrigued her. It read “the best of leechdoms” (in ninth century England, leeches were doctors and leechdoms were medical interventions and remedies; we call blood-sucking parasites leeches because the original leeches used them for phlebotomy) and called for a specific, complicated nine day-long preparation.

Garlic and leeks or onions were to be crushed, steeped in wine, mixed with ox bile, and stored in brass pots for nine days and nine nights. The result was a salve used to cure styes, an eye infection that we now know to be caused by staphylococcus. Lee enlisted the help of Dr. Freya Harrison, a microbiologist at the U of Nottingham, to determine if the millenia-old folk remedy really worked. They parsed the texts, hashed out the finer details (they added copper pennies instead of using a brass pot), followed the directions, waited nine days and nine nights, and tested it on some staphylococcus in simulated wounds.

It worked. The salve eliminated almost 100% of the staph. Several other trials confirmed the results. But that was regular old staphylococcus. For the next step, Harrison and Lee sent a sample of the salve to a colleague at an American university who had access to the good stuff: medication-resistant staphylococcus. The colleague was stunned, calling the results “astonishing”; the salve killed over 90% of the MRSA, even when it was protected by a sticky, mostly-impervious biofilm designed to resist antimicrobials. As to why it works, the mode of action hasn’t been identified. There are probably several different modes of action, since ox bile, garlic, wine, copper, and onions (or leeks) all have antimicrobial activity on their own.

Another group of scientists out of Sweden have amassed an impressive swathe of research into the antimicrobial potential of honey and honey bee bacteria. In one, they took isolates of infected wounds from human subjects and applied a combination of heather honey and 13 different types of lactobacillus bacteria found in honeybee guts. Thanks to the antimicrobial metabolites produced by the bacteria and the innate healing factor of the honey, the wound isolates healed faster. They also used the honey/bacteria salve to cure treatment-resistant infected wounds in horses.

They’re close to market with Honey Hunter’s Elixir, an old-style mead fermented using all 13 bee bacterial strains and the wild yeasts naturally found in raw honey that they claim “can actually be transferred to your blood and help you when you are infected with dangerous bacteria or promote health, preventing infections.”

So, folks: the world’s not ending. Science is a powerful tool, particularly when it expands its gaze to encompass the wider world and heeds, investigates, and analyzes past knowledge and traditions. And that’s exactly the direction microbiology appears to be heading.

What are your thoughts on antibiotic resistance and what it means for the world? Are there any other glimmers of hope you’ve seen or read about? If you’ve got news that dashes my sense of optimism into pieces, I’ll take that, too.