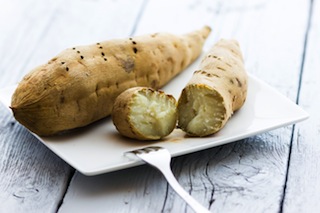 For today’s edition of Dear Mark, I’m answering one question. First up is the latest anti-paleo piece of clickbait, this time from the Guardian. Apparently the ancestral health movement has had a really bad year or something, and we’re barely hanging on after being dealt a series of devastating blows from the scientific community. Will we make it? Find out below. I also use the original question to springboard into a larger discussion on the new study claiming that carbs were necessary for the evolution of the enormous human brain. The media is selling it as a total refutation of the Primal way of eating, but I’m not so sure. It turns out we have way more in common than you might think from reading the headlines.

I would just so love you and your team to tear this pile of rubbish to shreds…..

What Paleo diet experts think – and why they’re wrong

I am tempted to do it myself but I fear I would use the words ‘uninformed’, ‘cherry picking’ and ‘moron’ too frequently….

It’s difficult to know where to start. I don’t want to tear into it too hard because that’d be like beating a six-year old in a game of pick-up basketball, so I’ll just go down the line and gently address each piece of evidence for paleo’s “bad year.”

Let’s start with the beginning. The author’s first piece of evidence is Jamie Scott’s retirement of the That Paleo Guy moniker late last year. Does that hold up?

Well, ask Jamie. The link provided by the Guardian sends readers to Jamie’s response to the Guardian column. How meta.

As it turns out, Jamie Scott didn’t leave paleo because of a sudden realization that the tenets of paleo eating and living weren’t supported by the scientific literature. He still finds value in the ancestral perspective as an effective framework for human health, fitness, and nutrition. Instead, Jamie viewed his departure from the movement as a disavowal of the paleofication of processed junk food — treats, cakes, cookies, and other things that are only nominally paleo because they contain almond flour instead of wheat flour — and a step forward, not back, for the  movement as a whole. Jamie felt his “disavowal” of paleo was being taken out of context and used to support a false argument, so he asked the Guardian author (James Bry) to remove his name from the article. Bry declined, and I’m actually glad he declined because anyone who follows the provided link will get the true story from the blogger formerly-known-as-That Paleo Guy himself.

Next, Bry mentions the low-fat/moderate-carb study that just came out. The implication is that the study threw the entire community into disarray, but the reality is that we took it pretty well. In my coverage last week, I didn’t trash it, get defensive, or discard its conclusions. I admitted it succeeded in doing what it set out to do but also that it wasn’t the nail in the coffin for the efficacy of low-carb diets for a few reasons:

Oh and of course, paleo is “meat-forward,” even though we eat more vegetables than most vegetarians, our plates are dominated by mounds of leafy green things, our idea of dessert is a bowl of colorful berries, and I’ve argued for the essentiality of plant foods.

Bry’s diatribe isn’t really worth much more space, but he does bring up (and continually refer to as a refutation of our entire movement) an interesting new paper about the importance of starch in human brain evolution. Contrary to the media coverage of it, the actual Hardy paper is a hypothesis. Does the hypothesis set us back?

Of course not. First of all, the importance of starchy tubers in early human diets isn’t some huge blow to ancestral health. We’ve been talking tubers for years, and it’s well known that tubers are fallback foods for many extant hunter-gatherers (who, again, aren’t perfect corollaries for paleolithic hunter-gatherers, but they’re important pieces of the puzzle). For my money, tubers are the best source of concentrated carbohydrate a human can eat (provided that human needs a dense source of carbs).

Second, the Primal eating plan isn’t necessarily low-carb. I’m not sure how many times I need to say it for it to sink in. I regularly recommend upwards of 150 grams of carbs per day, and even more for highly active individuals who can actually use the carbs. 150 grams of carbs is more potatoes than you think.

Fourth, Hardy’s hypothesis appears to rest on the correlation between the invention of cooking and the increase in copies of genes coding for salivary amylase. That is, as humans began cooking their starchy, fibrous tubers, the amount of salivary amylase humans produced increased to allow greater utilization of preformed glucose formed by cooking, and this prompted an acceleration in human brain growth beginning 800 thousand years ago (kya). This is compelling, but I’m not sure it all lines up. According to a recent paper, salivary amylase gene duplications arose in humans sometime after our divergence from Neanderthals 600 kya and before our adoption of agriculture 10 kya. If that’s true, our brain size began accelerating before we started making more copies of the salivary amylase gene. Though cooked starches still could have (and likely did) played a role, it appears that salivary amylase gene duplication wasn’t involved, at least from the start.

Overall, the likelier hypothesis is that cooking of food in general allowed greater calorie intake and a bigger brain. There’s nothing special about preformed glucose. Whether we ate glucose directly, made it from protein or fat, or ate enough fat to reduce our glucose needs throughout the body and reserve it for truly essential organs and physiological processes, the important thing is that we had access to concentrated sources of calories. Cooking made that possible. I think starches were necessary but not sufficient (both meat, fat, seafood, and marine fat (PDF) would have something to say about that), and Hardy would likely agree.

Heck, my favorite sequence in the article occurs when Bry criticizes me for recommending 100-150 grams of carbs per day, only to reference Hardy’s 150 g/day recommendations as a refutation of mine. We’re not so different after all.

Back to the Guardian: C’mon, journalists. I understand the draw of spending a couple hours writing a quick and easy clickbait article that you know will get the views, but spend a little more time. You can do a lot better. Or maybe not. There was that professor who wrote an entire book arguing against ancestral health, presumably spending more than an afternoon on it. She ended up agreeing with most of what we actually say in this community, arguing against anonymous internet commenters rather than actual thought leaders, and recommending a closer look into evolutionary mismatches between our genes and our environment (which sounds awfully familiar to me). I guess the problem isn’t your arguments, or the amount of time you spend on them. It’s that you’re arguing against a way of living, eating, and moving that just works. You’re arguing against a moving target, a health movement that follows the evidence and reevaluates old tenets when necessary.

That’s tough to beat. Good luck to you.

What do you think, folks? Did the Guardian article land a serious blow to the movement? Are we having a bad year? And what about the carb/big brain paper — does that change how you approach diet?