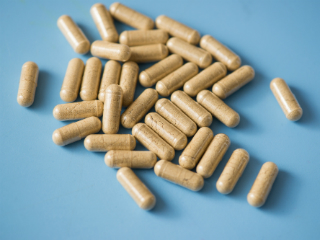 For today’s edition of Dear Mark, I’m answering three questions. First, are the amino acid supplements sarcosine, D-serine, and D-cycloserine worth taking? What do they do and who can they help? Next, what should you do to prevent an infection? Besides the regular stuff like vitamin C and vitamin D, is there anything else to take to mitigate the damage and prevent pathogenic incursions? And finally, I field a question from a fencer and martial artist who’s feeling the beginning twinges of knee pain. He leads a lunge-heavy life—it’s an inescapable part of his training—and I offer a few suggestions for limiting the damage.

You have talked about branched chain amino acids before.
I was wondering how safe you believe the other Amino Acid supplements are?
In particular, Sarcosine, D-Serine, and D-Cycloserine?

These aren’t the BCAAs you’re used to taking to enhance performance in the gym, fat loss, and body composition.

Sarcosine, D-serine, and D-cycloserine increase signaling at the NMDA receptor, a glutamate receptor that plays a huge role in depression, schizophrenia, addiction, anxiety and other mental disorders. Sarcosine is a glycine transporter-1 inhibitor; it reduces the amount of glycine taken up by cells, increases serum glycine levels, and makes more glycine available for binding with the NDMA receptor. D-serine is an NMDA co-agonist; it makes the NMDA receptor bind more effectively to other agonists. D-cycloserine is a partial NMDA co-agonist that also acts as an antibiotic against tuberculosis.

What are they good for?

They’ve all been studied in schizophrenia. In both long-term stable schizophrenia patients and patients suffering from acute episodes, sarcosine reduced the PANSS (positive and negative symptom score). D-serine improved symptoms, just not as effectively as sarcosine. Adding it to an antipsychotic regimen helped reduce symptoms, too. D-cycloserine is also effective against symptoms of schizophrenia when added to typical meds.

D-cycloserine shows promise in treating anxiety disorders, mostly as an enhancer of existing treatments. When you take it shortly before the exposure, cycloserine makes exposure therapy better at extinguishing anxiety and fear in a number of disorders including snake phobia, OCD, social anxiety, panic disorder, and acrophobia (no word on arachnophobia). It may also help older autistic kids and teens with their social skills.

As the NMDA receptor is a popular and viable target for cognitive enhancement, and enhancement of NMDA receptor function is a “core strategy” in combatting age-related cognitive decline, these amino acids may have potential as nootropics. Do they work?

It’s all very preliminary. In one study, D-serine improved working memory, sustained attention, verbal fluency, and reaction times. One group of researchers suggest D-serine may be “the key” to synaptic plasticity, which is required for learning something new or the formation of memories. Sarcosine should work pretty well for this, too, as it increases D-serine levels.

However, sarcosine is also elevated in patients with prostate cancer. It’s even found in the prostate tumor itself. Its relationship to prostate cancer isn’t strong enough to warrant using sarcosine as an early biomarker for detection of prostate cancer, but it may act as a co-carcinogen once the cancer has been established. This is extremely speculative, mind you.

So while these are probably “safe,” they’re mostly used for very specific treatments, often under medical supervision, and probably don’t have as much application to the general public. If you have any of the conditions listed above, mention these amino acids to your doctor and show some research.

As our family’s go to health Guru I have a question for you that I wasn’t able to find an answer to on your site already. I have a feeling I already know at least part of the answer from reading daily but here it is….

My wife and I have three children. My girls are 10 and 5 and my son is 9 months. Just the other day, my younger daughter and my son came down with the dreaded 24hour-ish stomach bug. Now my wife, older daughter and I feel like the poor victims on The Walking Dead” who have been bitten but not killed and are just waiting for the sickness to ensue. So my question is, outside of doubling down on Probiotics, Vitamins D and C and increasing water consumption, on top of a quality primal 90/10-ish diet, are there any other measures you would recommend to try and avoid coming down with the stomach bug ourselves?

Thanks for all that you do! You have been an incredible resource for our family over the last 4+ years.

There are a couple things you can try in addition to probiotics, vitamin D, and vitamin C, which are all good things to try:

Zinc: Taken at the onset of an infection, it can reduce the duration. Taken with vitamin C, it’s even more effective. Taken regularly, it can reduce the incidence of infections in people with zinc deficiency. Shoot for at least 45 mg of elemental zinc.

Garlic: Take an entire head of garlic, smash each clove, and let them sit for ten minutes. Drop into simmering broth for 3-4 minutes, until some but not all of the pungency has dissipated. Drink broth, eat garlic. This is a lot of garlic, but it seriously works wonders.

As far as probiotics go, make sure you’re taking one with L. plantarum. It’s the strain with the most efficacy against infections.

Bear in mind that most of the above research is on upper respiratory tract infections like cold and flu. The stomach flu, or gastroenteritis, can have a ton of different causes so it’s difficult to make specific recommendations. Hope it helps and good luck!

I’m a regular fencer and martial artist who’s passionate about the sports they love, I practice lunging and techniques almost every day but I’m hitting 30 in the next couple of years and I’m starting to get a few niggling pains in my knees I’m hoping to see a physiotherapist about soon.

All of this got me a bit scared because I’ve always hoped to keep primally healthy and practicing well into old age.

What advice do you have for diet exercise and lifestyle choices for keeping the knees healthy in the long term for those of us who regularly give them a pounding?

I don’t know enough about fencing or martial arts to offer specific modifications to your skill training, but I do have some general advice.

Check out MobilityWOD. Focus on the lower body MOBs (mobility workout of the day). Anything to do with hips, hip flexors, hamstrings, glutes, calves, ankles, feet, quads. Learn to love/hate the couch stretch.

Stretch your calves (often tight in lunging athletes, since lunges let you get away with tight calves whereas squats do not). These work well.

Switch to rear lunges when training. Obviously, when competing you’re going to be doing all sorts of forward lunges, but you don’t need to hammer that movement during training. Rear lunges will strengthen the same movement patterns in a controlled fashion.

Do some stability lunges. Get in a lunge position and hold it. Really stretch those hip flexors out. Get comfortable there.

Foam roll/lacrosse ball your legs. Get in there. Some say they don’t work, but I think they do.

Make the lunge a hip hinge, rather than forcing an upright posture. Hinging at the hip during a lunge with a little forward lean of the torso actually places more emphasis on the glutes and less on the knee, contrary to popular belief.

Get some collagen in your diet. Eat more gelatin-rich meats. Make/drink bone broth. Learn to cook oxtails, shanks, feet, hocks, and other collagenous animal parts. Try my collagen chocolate bars, which are delicious and get you most of the gelatin you need in a day. The human body requires at least 10 grams of glycine per day for basic metabolic processes, so we’re looking at an average daily deficit of 7 grams that we need to make up for through diet. With gelatin running about 33% glycine, aim for 21-25 grams of gelatin a day. Maybe even more, since you’re experiencing joint pain and glycine requirements go up in joint disorders.

Get your omega-3s. If you’re not eating fatty fish on a regular basis, that’s a no-brainer. Fish fat is anti-inflammatory, and although human evidence is mixed, the general consensus is that it improves joint pain. Besides, we know that omega-3s are important for other reasons, so why not try?

Eat turmeric or take curcumin. Curcuminoids from turmeric have shown efficacy against osteoarthritis (in addition to inflammatory disorders in general). A blend of turmeric extract, hydrolyzed collagen, and green tea extract looks like it might work pretty well.

Thanks for reading, everyone. Take care and be sure to help out with your input down below!