Adult Sports Leagues, and Why You Should Join One 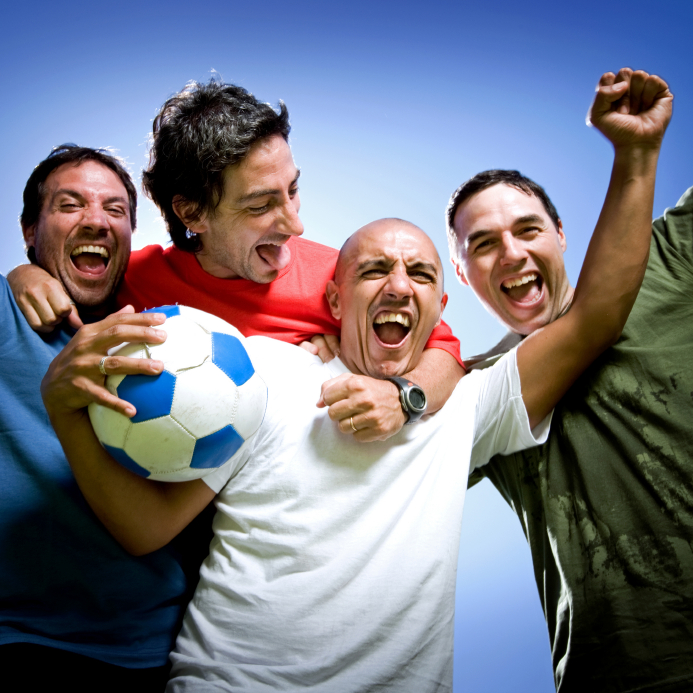 Last week’s post on the buddy system got me thinking about the importance of general camaraderie in physical activity, beyond just the fact that having a person who relies on you to work out will get you off your butt and moving. I think you can go further than a single buddy – how about an entire team of them?

I don’t know where I’d be without my weekly Ultimate Frisbee games. That may sound silly or infantile, but I’m serious: it keeps me sane, melts the stress away, and represents an opportunity to keep up with friends (in person, not over some social network or through texting). In other words, it’s my primary form of playing. And though I realize it’s ultimately my fault, I don’t think I play up Play enough around here. Sure, there was the Definitive Guide some time back, and we all remember the post on dance (no, I still haven’t uploaded any videos), but it really deserves more emphasis. It’s one of those aspects of life that seems to fall by the wayside, even as you intellectually acknowledge its importance. Heck, with children having trouble getting a good solid play session in these days without strict adherence to a daily planner, is it any wonder that adults need the occasional nudge toward carefree play?

Play doesn’t have to be totally unstructured, though. It’s not necessary to flail around like a young kid exploring the extent of his or her physicality, or climb around on jungle gyms amidst odd looks from parents. In fact, there’s something to be said for engaging in cohesive, structured group play – also known as sport. Our ancestors surely played sports, both for fun and as tests of physical prowess, and there exists extensive evidence of sport in the ancient world, from Gaelic field hockey-esque hurling to Chinese soccer-esque cuju to Roman rugby-esque harpastum to the mysterious Mesoamerican ballgame. A Native American game called chunkey, in which spears and sticks were thrown through rolling stone hoops, may have helped usher in inter-tribal peace in what’s now the southeastern United States. Sport is powerful. While it’d be pretty cool to start up a Primal harpastum league, you’ll probably have better chances with one of the more contemporary pursuits.

Back when I was a kid, finding a pickup football game was as easy as heading down to the local field on a summer’s day. Basketball games could be had at any open court, and kickball or baseball games were always popping up at the local diamond. How’s a person to get involved nowadays? Well, it depends entirely on what sport you’re interested in.

People still play basketball outside without needed structured leagues to make it happen. Just visit a local park and, if the sun’s out and there’s a full court available, you’ll probably be able to get a game going. I don’t play the game myself (I enjoy watching, though), but one of my buddies plays pickup games all the time. His advice? Find a park where people are playing, making sure they’re not too good (or too bad) for you, and put your name in to play. It also helps to ask what time of day and day of the week people generally play, since you’ll find that outdoor pickup courts follow an unofficial schedule of sorts.

There are also more organized avenues. For pickup games or open gyms in your area, check out Infinite Hoops or No Fouls. For adult amateur leagues, try googling “adult basketball leagues [your city here].” I tried looking for a comprehensive aggregator, but they were all regional.

Yeah, I’m biased, but it’s just a fantastic sport. I’m also biased toward meat and vegetables. Ultimate also has a lower barrier to entry than some of the other sports, where you might face off directly against opponents with vastly superior talent, strength, speed, and size. Don’t get me wrong; you still gotta have accuracy, speed, and the ability/willingness to throw your body out there for some big catches, but total beginners can have fun with it.

If you can’t get enough friends together to play, check out some local leagues through the Ultimate Players’ Association. As always, Google is your friend. LA people, check this.

Ultimate’s lesser-known relative that combines golf and frisbee, frolf is kind of the black sheep of the disc-related sports. We don’t really like to talk about or acknowledge its existence, to be quite honest, but I felt for completeness’ sake I’d give it a plug.

Though my Ultimate teammates would crucify me for doing this, here’s a frolf course finder for the United States. Enjoy.

Sure, hipsters may have obfuscated and ruined just about every fond childhood memory through layers of cheap irony, but they can’t take kickball away (try as they might). Kickball is like baseball, only with big rubber balls and feet. It is a true joy. You probably won’t get an amazing intense workout with kickball, but you’ll have fun, and that’s really what we’re going for here.

Check out WAKA for a league near you, or spring for the kickball set and get your own games going. If that doesn’t pan out, you can always follow the trail of empty PBR cans.

Elementary school districts across the United States have been banning children from engaging in ultra-competitive, soul-crushing sports. You know, stuff like tag, freeze tag, hide and go seek, capture the flag, and, most famously, dodgeball. Dodgeball is a tough sport. I played it as a kid and there’s no ignoring the fact that getting pegged in the face by a rubber ball is embarrassing and defeating. It’s just you, the ball, and that annoying kid that sits behind you and flicks spitballs at the back of your head in class. Someone’s getting hit and someone’s walking away victorious. That’s a lot to handle, but it’s an important lesson for anyone, even adults. So, adults, think about playing some dodgeball.

American football is a tricky one. There’s a reason high school, college, and pro players wear lots and lots of padding: throwing one’s adult body full force against another adult body can be dangerous to both bodies. Of course, those guys are incredible athletes, hugely strong and fast at once, so there’s a lot more potential force behind those hits than you see with the biannual warriors in the park on Super Bowl Sunday during half time. Some, though, have argued that the padding and helmets only make the hits harder, wilder, and more dangerous (kinda like how thick running shoes mask the damage that’s being done to your feet and lower limbs until it’s too late), so maybe playing naked (not like that) subconsciously ensures safer hits.

Flag or touch football is a good option if you want to avoid any career-ending injuries, or just play with friends you trust and tackle/tread lightly.

It’s the biggest sport, globally, but since I have a lot of American readers who may not be into it, it bears mentioning. Soccer is undeniably intensely physical; you have to be in great physical shape to keep up the pace of a 90-minute soccer game spanning the entirety of those huge fields. And you don’t necessarily have to be great at it in order to have fun – if you don’t believe me, just watch a youth soccer game sometime. They’re generally awful (lots of clustering around the ball, regardless of a player’s position on the team) but seem to really enjoy it. I see a lot of pickup games at local LA parks on Sunday evenings, right before dusk. Any city with a large Latino population will probably have games available.

If that doesn’t work, try a Google search for local adult soccer leagues.

This is not my favorite sport. Okay, I harbor an intense disinterest in it, bordering on dislike. That said, it is a sport that takes speed, strength, hand-eye coordination, accuracy, and teamwork. Maybe it’s because I was never any good at it that I don’t like it, but go ahead and do it if you’re a fan. Anything physical that gets people working together toward a common goal (the utter defeat of your opponents) is fine by me.

The ever popular corporate softball league is a good reliable option, or you could check out the Adult Baseball Association.

This is serious stuff, guys. It’s not food and it’s not resistance training or sleep or which supplement is best, but it is vitally important. Sports are a way to test your mettle. Anyone can face down an inanimate object (barbell, your own bodyweight, a pullup bar, a steeply ascending mountain hike), but how often do you get to see how you stack up physically and mentally against your fellow (wo)man? The rush of victory is delicious and addictive, while defeat is a bitter pill that we should all learn to swallow. Both have their place in a healthy, happy, well-adjusted modern life, but it’s up to us to make it happen.

On second thought, this post is no nudge; it’s a well-placed boot.

So do it, and let me know how it goes in the comment board!