A Few Simple Lifestyle and Diet Changes Have Transformed my Health

I’ve always had an interest in biology, evolution and how the body works.

All hope was not lost, however. After attending a career workshop at the age of 16, I discovered that there were plenty of other ways I could be involved in medicine. I soon became fascinated with the idea of becoming a medical researcher. I was quite taken with the idea of being involved in the discovery and development of cutting edge research that had the potential to change the world.

I was an idealist back then, and I still am now.

While undertaking my undergraduate degree in Biotechnology, I became interested in inflammation and the immune system. I pursued my interest in this field during my PhD and investigated how the immune system was involved in the rejection of corneal grafts.

After completing my PhD, I was lucky enough to land a post-doctoral position at the University of Cambridge, where I worked for four and a half years. Here, I investigated the role that endothelial cells (the cells that line the inside of our blood vessels) play in the inflammatory process in relation to lung disease.

I look back at my research career with fondness. I am proud of my findings and my contribution to medical research. However, the long hours and the competitive nature of the profession made it hard for me to see research as a long-term career option after the birth of my daughter; being a mom had changed my outlook on life.

I had always been so focused on my research career, I had never envisioned myself pursuing another profession. However, as a woman with a child, the odds of landing a coveted tenure-track position were stacked against me. The idea of living from grant to grant became less appealing now that I had a little person relying on me to provide a stable, secure life for her. Even less appealing were the long days in the lab, which every post-doc can relate to.

I wanted more from my life than working all day in the lab. More importantly, I wanted to be a positive role model for my daughter, and my husband and I wanted to create a home environment that would promote a healthy, happy lifestyle for our children.

The desire to pursue a career outside of medical research began to play on my mind, but more on that later.

My health story isn’t one of massive weight loss, and I don’t have an awesome before and after photo. Don’t get me wrong, my health story does include total body transformation, but my biggest changes were those that most people couldn’t see: my mindset and my digestive health.

I’ve always been an active person. I was a competitive swimmer in my teenage years, and I’ve played Ultimate Frisbee at the international level. However, it wasn’t until I discovered The Primal Blueprint at the age of 29, that I can honestly say that I was healthy.

At face value, my pre-Primal lifestyle may have seemed quite healthy. I went to the gym 2-3 times a week. My favourite classes were cardio blast and spin, and I would play Ultimate Frisbee around 2-3 times a week.

However, pre-Primal Sarah suffered from irritable bowel syndrome, largely due to my terrible diet. I ate low-fat everything, and I proudly boasted about eating a breakfast pizza on my wedding day. Back then I couldn’t tell the difference between bloating and the sensation of feeling full after a meal.

I was at the point where I was ready to do whatever I needed to feel healthy again.

In 2012, my husband and I moved from Adelaide, Australia, to Cambridge, England, and our Primal health journey began the moment our plane landed at Heathrow Airport.

I’m going to admit that I was a total skeptic in the early days. How was eating MORE fat going to help with my bowel problems? And I wasn’t entirely convinced that I wasn’t going to gain weight. Workout less? This didn’t seem right.

The first few weeks of Primal living were tough for me. I suffered from the low-carb flu, which made me irritable and tired, not to mention the added stress that my husband and I were under after moving to a new country and starting new jobs. There were times that I really wanted to pack it in and order a Twister Combo from KFC.

With the guidance and support from my husband, I managed to stay on track with my Primal lifestyle, long enough to notice that my “hanger” was gone, and that I could skip lunch if I was busy with an experiment in the lab—something that I didn’t think was at all possible previously. My bloating was a thing of the past, and I had started to become noticeably leaner. I had become a fat-burning beast without even realizing it!

We saw our move as a fresh start. We had no bad habits to shake, and no temptations sitting in our pantry. It was the perfect opportunity to put our health first, and the best part of all was that we did it together. We cycled or walked everywhere. We replaced soft drinks and juice with cups of tea, and we enjoyed discovering tasty new Primal and paleo recipes.

Without experiencing my very own health transformation, I would have found it difficult to believe that making a few simple lifestyle and diet changes could have such an impact on my health. After years of suffering, my bowel health had healed, my work productivity had increased, and I had become more content with life.

The Beginning of My New Health Coaching Career

Before the birth of my daughter, I had no idea what a health coach was, let alone any idea that I would consider a career in this profession.

My husband and I had been living a Primal lifestyle for about 2 years before I fell pregnant. During this time, no one (at least to my knowledge) ever saw me as a health expert.

I started CrossFit 8 weeks after my daughter was born, and I immediately fell in love with it. My two hours of CrossFit every week were what got me through those first few months of being a parent. I loved the workouts, the heavy lifting and the sense of community that comes with most boxes (CrossFit gyms are referred to as boxes). Most importantly, I was working out because I loved my body, not because I loathed it.

Within 4 months of giving birth to my daughter I actually felt stronger and healthier than I did before my pregnancy, and this was all from living a Primal lifestyle and attending two CrossFit sessions/week.

Friends, colleagues and acquaintances watched me regain my pre-baby health and fitness with relative ease, and I soon found myself being asked health related questions on a daily basis.

What is your health secret? What do you eat? How often do you exercise?

I was amazed and embarrassed that people were asking me for health advice.

Who was I to give anyone health or fitness advice? I wasn’t a nutrition expert or a fitness instructor.

At first I had no idea how to answer these questions, but once I got over the embarrassment of being seen as a health advisor, I realized that I enjoyed sharing my tips on healthy living with anyone who was interested enough to ask. I also realized that my years of working in medical research helped me explain the science behind the Primal concepts, which made it easier for people to understand how the Primal lifestyle works on a physiological level.

And so the idea of becoming a health coach was planted in my mind.

I took my first big step towards my new career when I completed my CrossFit Level 1 Certificate Course. Because CrossFit had made such a difference to my life, I was eager to share this knowledge with other women, especially mommies who may feel intimidated in that kind of environment. After getting my CrossFit trainer qualification, the head coach at CrossFit RNA, Cambridge, UK, took me under his wing and allowed me to help out at the box 1-2 times a week. This is where I fell in love with coaching.

With my confidence growing, I decided to enroll in the Primal Health Coach program. As Primal living had made such a huge impact on my own life, I knew that I wanted to help others achieve their own health goals. Following this, I next enrolled in a personal training course.

I now had a clear vision for my new career. I wanted to start my very own health and fitness business. My business ethos would be to empower women to love their bodies and to become the happiest, healthiest versions of themselves.

Studying, while working as a researcher and looking after my little girl was challenging, but rewarding as I knew what my end goal was.

Taking these initial steps towards my new career as a health and fitness coach was terrifying and exciting. I was on my way to living my dream! Little did I know that it was all going to happen for me very quickly.

I left my medical research career in Cambridge, UK, and moved back to Australia with my husband and daughter. This was when I launched my own health and fitness business Nourish & Lift.

Nourish & Lift started out small. I began by coaching close friends and family, which led to friends of friends coming along, and now my client base is steadily growing. Coaching is my passion and I can honestly say that there is no better buzz than seeing my clients make progress towards their own health goals.

But my story doesn’t end here.

To complement my own health and fitness business, I’m also a freelance blog writer for the Primal Health Coach Program. I feel honored to be given the opportunity to give back to the community that has turned my own life around. Working for the Primal team really is a dream come true.

My health coaching story is about going after what you want, following your dreams and turning them into reality. Ultimately, I’m doing what I had always wanted to do as a child. I’m making a difference in the world and having a direct impact on peoples’ health and happiness; the very reason why I wanted to be a medical doctor all those years ago. 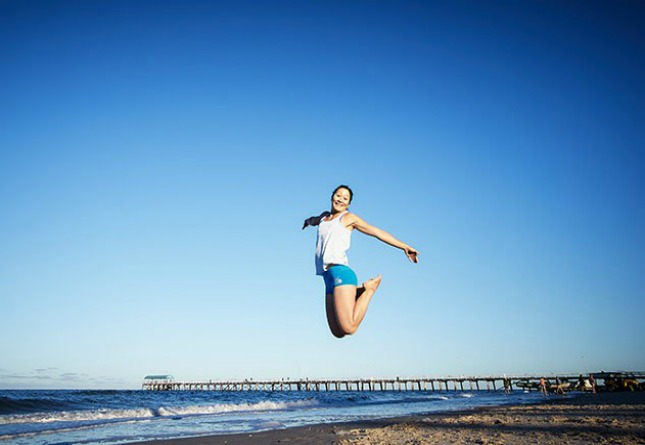