9 Worthy Alternatives to the Back Squat 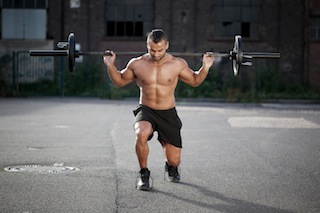 As great as back squats are for strength, general fitness, and body composition, sometimes they just don’t work for a person. Maybe they cause knee, shoulder, or wrist pain. Maybe someone’s body proportions aren’t conducive to proper back squatting. Maybe their legs are too long to achieve good depth without compromising position. While there are dozens of articles imploring you to mobilize this or that joint and work out the kinks in this or that muscle so that the back squat will work, and those can be very informative and helpful, some people just don’t want to back squat. For whatever reason, it doesn’t work for them.

So – are these people doomed to perpetual chicken legs? Should they turn in their gym card forever and resign themselves to a life of sedentary existence?

Absolutely not. Plenty of other knee flexion exercises are worth doing. Let’s take a look at some of the best alternatives.

Goblet squats are easier on most bodies than back squats for two reasons: less weight is used (because you have to hold it in your hands at chin level) and they promote a more “natural” squatting technique. To perform a goblet squat, you hold a weight (kettlebell, weight plate, dumbbell, small child) at chin level, stay tall, and squat down between your legs while maintaining an upright torso. Many seasoned strength coaches use the goblet squat to teach beginners how to squat because it’s so intuitive.

That said, there are some extra details to keep in mind:

Since you won’t be pushing heavy weights with the goblet squat, focus on higher reps and more overall volume. If things get dicey, dropping the weight in a goblet squat is way easier than dropping a barbell sitting on your back.

To me, front squats have always felt more natural than back squats. There’s less thinking about what your joints are doing and which muscle groups you’re supposed to be activating. You just squat with a weight in the front rack position and the rest follows. It’s hard to mess up and round your lower back because if you lean too far forward during a front squat, you’ll just dump the weight.

According to a 2009 study on front and back squats in trained individuals, front squats exert fewer compressive forces on the knee and “may be advantageous compared with back squats for individuals with knee problems such as meniscus tears, and for long-term joint health.” Furthermore, front squatting less weight resulted in identical muscle activation as back squatting more weight.

The more upright posture inherent to front squats is also good for people with lower back pain by creating less shear stress on the vertebrae. An important cue to keep in mind during the front squat is “elbows up.” This creates a strong, stable shelf for the bar and cues the torso to stay firm and unyielding to forward tilt. If your elbows dip, the rest will soon follow.

The trickiest aspect is the rack position. There are three ways to hold the bar in a front squat — crossarm, Olympic, or with straps. See this video for an explanation of the different techniques.

In Zercher squats, the bar sits in the crook of your inner elbows about belly-high as you squat. This places more emphasis on the core and glutes. Anecdotally, people with knee pain during normal squats seem to flourish with Zercher squats. As for the weight resting on the arms, it hurts at first, but you get used to it. And if you don’t, you can always use a pad or a rolled up towel to dampen the pain.

They kind of force good form, too. As you squat down with the bar in the crook of your arm, your elbows fit neatly between your knees and prevent them from buckling inward. As you come up, be sure to thrust your hips fully forward at the top and stand up straight.

Initiate zerchers in one of two ways:

The more involved method – Deadlift the bar to just above the knee. Squat down, carefully letting the bar rest on your lower quads. Slip your inner elbows underneath the bar and stand back up. Commence Zercher squatting.

The easier method – Place the bar on a squat rack set to about waist height or a bit higher. Slip your inner elbows underneath the bar and stand back up. Commence Zercher squatting.

Several years ago, a strength coach named Mike Boyle made waves across the Internet by recommending against back squats and promoting Bulgarian split squats in their stead. The split squat, he said, allows fuller loading of the legs being worked by removing the back from the equation. In a Bulgarian split squat, you place one foot behind you on an elevated surface and squat down until the back knee touches the floor (or a pad resting on the floor), keeping the weight on the foot in front of you. Getting your balance right can be tricky at first but once you’re comfortable it’s a great way to isolate individual legs without taxing your back. Many a trainee has woken up with throbbing glutes after a day of split squats.

Play with the height of the surface your back foot is resting on. If it’s too high, you’ll place some wonky shear stresses on your back. Lower the height if you find your back arching or your torso tilting too far forward. Stacking a few weight plates about six to eight inches high is good enough for most people.

Check out a video of the Bulgarian split squat in action.

To target quads, hamstrings, and glutes, use a surface high enough that your knee is at 90° when you step onto it. The higher the box, the more glute and hamstring you’ll hit. Lower boxes will focus more on the quads. Try not to push with the off foot. If you find yourself pushing off despite best efforts, dorsiflex the off foot and touch down only with the heel.

Here’s a good video example of weighted step-ups with a barbell in the front rack position.

My go-to exercise when dealing with substandard hotel gyms is a few sets of walking lunges while carrying the heaviest dumbbells they’ve got. There’s something special about the combination of moving through space and lifting that adds a whiff of complexity and increases the training adaptations.

Lunges are relatively easy on the knees for many people who get knee pain during back squats. For others, it’s the opposite (but this post isn’t really intended for them). If you have problems with lunges, play around with the torso angles. Turning the movement into more of a single leg hip hinge by slightly leaning forward (shoulders over knees) can alleviate unpleasant forces to the knee.

Walking lunges are awesome, but they require magnificent balance. And if you’re pushing heavy weight, any minor mistake during the initial descent can send you and the weight tumbling. They also require a lot of room. Reverse lunges are generally safer, more stable, and they don’t require much space (because you do them in place).

After the Smith Machine squat, the leg press is probably the most maligned lower body workout across the entire Internet. Mark Rippetoe, Starting Strength creator and enthusiastic promoter of the low bar back squat, thinks a person should only use the leg press to get strong enough to squat. That’s a fair assessment of its potential, but too many people have taken the extreme position that the leg press is useless or even counterproductive for building leg strength.

It’s true that the squat is more effective than the leg press. Squatting demands more from your body, and the subsequent rewards have the potential to be greater in turn. However, with greater rewards come greater risks, particularly if you have a preexisting lower body injury. In one study comparing the two, the squat had more potential for muscle development but greater risk for people with knee injuries.

These days, I’ll occasionally use the leg press machine. For my goals, it works. The leg press also seems to work pretty well for one of the strongest dudes I know, Keith Norris. If you don’t believe me, just watch him grind out a brutal set. Tell me that’s not a good lower body workout.

Whatever you do, resist the temptation to go so low on the leg press that your back starts to round at the bottom. This places a huge amount of really weird stress on your lower back. Stick to parallel and have someone watch (or film) you and confirm that you aren’t rounding your back.

Oh, and I almost forgot:

Don’t underestimate the efficacy of the simple bodyweight air squat. It’s great for mobility and surprisingly metabolically demanding. You can increase the difficulty — without changing the loading — by slapping on a weight vest; I frequently do this.

That’s it for today, everyone. If you’ve ever felt guilty for not doing or enjoying back squats, I hope you’ve found at least a couple exercises in today’s post to fill the void — and get you a fantastic workout in the process.

Thanks for reading. What are your favorite alternatives to the back squat? 6 Concrete Ways to Rewire Your Brain for Successful Habit Ch...

Intermittent Fasting: How It Works, Reasons to Try It &...

50 thoughts on “9 Worthy Alternatives to the Back Squat”